Ted Cruz
stated on October 26, 2015 in a Houston press conference:
My campaign "finished the last quarter reporting the most cash on hand of any Republican in the field … $13.8 million in the bank, $3.5 million more than the Jeb Bush campaign."

Ted Cruz of Texas recently declared that his campaign’s fundraising is "astonishing" and suggested that’s a surprise to the "Washington chattering class" and maybe even former Florida Gov. Jeb Bush, another Republican bidding for president.

Sen. Cruz, appearing in Houston Oct. 26, 2015, to accept endorsements from statewide elected Republicans including Lt. Gov. Dan Patrick, celebrated how much he’s raised in Texas and in general.

He made us wonder with mention of the Texas-born Bush, who’s trying to become the third member of his family to win the White House.

Cruz said: "And we finished the last quarter reporting the most cash on hand of any Republican in the field… $13.8 million in the bank, $3.5 million more than the Jeb Bush campaign." Cruz added that if he’d predicted such an outcome relative to Bush six months before, reporters would have laughed aloud. Early in 2015, Bush drew headlines for raising money at a vigorous clip.

No giggling here. But was Cruz right about his campaign having the biggest pile of cash on hand and exceeding Bush’s balance by $3.5 million?

Campaign vs. campaign, you bet your cacti.

But throw in money raised by PACs and Super PACs devoted to individual candidates and it could be there’s far more money stowed away to boost Bush. Then again, PAC fundraising updates won’t be filed until 2016.

To our inquiry, Cruz campaign spokeswoman Catherine Frazier emailed us a list indicating that Cruz’s campaign ended the year’s third quarter, June through September 2015, with more cash on hand than any other Republican aspirant.

Separately, we fetched a Federal Election Commission summary, dated Oct. 19, 2015, stating that through September 2015, Cruz’s campaign had nearly $13.8 million cash on hand. And Cruz’s balance, according to the document, exceeded the cash on hand of any of 15 other listed current or former Republican presidential candidates. At No. 2, retired surgeon Ben Carson had nearly $11.3 million cash on hand, according to the summary, followed by Florida Sen. Marco Rubio with nearly $11 million and Bush with nearly $10.3 million.

We’re not saying here that Cruz outraised everyone. According to another FEC summary, also dated Oct. 19, 2015, Carson raised some $31 million through September 2015, outpacing Cruz’s nearly $27 million and Bush’s nearly $25 million.

Businessman Donald Trump, who has led many Republican voter polls, reported a scant $254,773 cash on hand through the third quarter. But Trump, who's wealthy, also has declared plans to self-fund his candidacy. Maybe how much cash he has on hand isn’t significant. Also, Politico noted Oct. 15, 2015, Trump fielded about $3.7 million in donations in the third quarter.

Notably too, Democratic presidential hopefuls Hillary Clinton and Bernie Sanders each ended the quarter having raised more money and also having more cash on hand than any Republican. Clinton, the former first lady, senator and secretary of state, had nearly $33 million on hand, according to the FEC, and Sanders, a Vermont senator, had $27.1 million.

There’s another wrinkle if you consider how much money PACs and Super PACs devoted to candidates may have in cash on hand.

Separately, the Center for Responsive Politics, which tracks campaign spending, posted a chart in October 2015 showing Bush PACs and Super PACs fielding far more money than any other hopeful, again with information limited to what such groups had reported through June 2015: 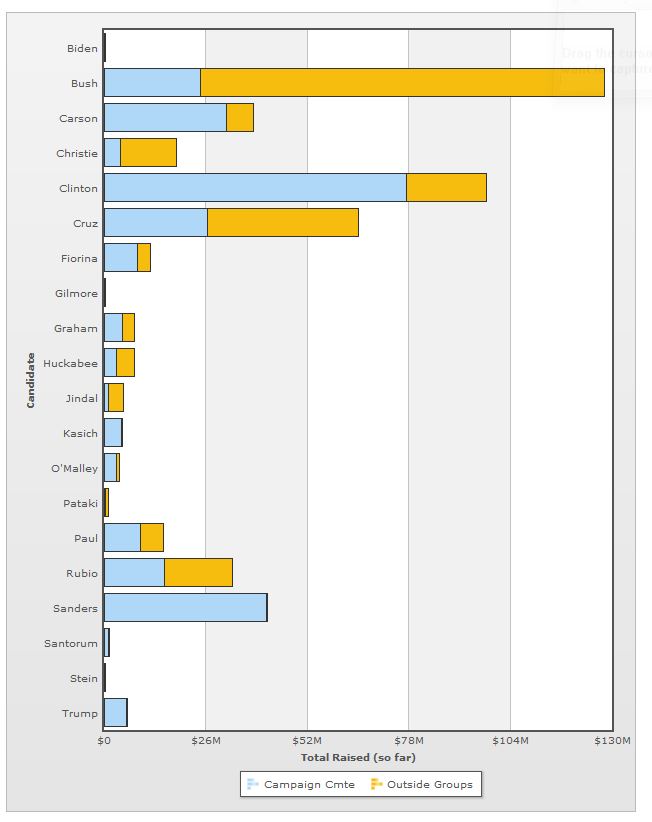 The chart is preceded by explanatory text: "The modern presidential campaign isn't a single organization. Yes, there's always an official campaign committee. But for every White House candidate, there is usually at least one super PAC or other outside organization devoted to getting him or her elected. These groups can solicit unlimited donations and later use them to pummel rivals – or, as seems to be the case this cycle, take on some of the duties traditionally handled by a campaign, such as organizing town hall meetings or doing voter outreach."

The explanation continues: "Outside groups aren't allowed to coordinate with official campaign committees, but they're often run by friends and former staffers – even family members – of the candidate they're helping. Overall, as of the middle of 2015, single-candidate super PACs in the presidential race had raised more money than the candidates themselves. But that wasn't true among Democrats, whose potential nominees raised more than the super PACs supporting them."

Frazier of Cruz’s camp agreed by email it could be that money accumulated to promote Bush’s candidacy still runs ahead of funds raised for Cruz’s cause. Regardless, she reminded, Cruz limited his Houston claim to funds raised by campaigns alone.

Cruz said his campaign "finished the last quarter reporting the most cash on hand of any Republican in the field… $13.8 million in the bank, three and a half million dollars more than the Jeb Bush campaign."

This is all so, though Bush still might remain ahead (perhaps way ahead) in money accumulated on behalf of a Republican. We won’t know how much total cash has been stashed to help each candidate until PACs report again in 2016.