Instagram posts
stated on May 15, 2021 in an Instagram post:
"COVID-19 Jab: They skipped all animal trials because all animals were dying and went directly to people."

Vials of Johnson & Johnson COVID-19 vaccine sit in the pharmacy of National Jewish Hospital for distribution on March 6, 2021, in east Denver. (AP/Zalubowski)

A viral Instagram post claimed that the manufacturers of the COVID-19 vaccines "skipped all animal trials because all animals were dying." That’s not true.

"COVID-19 Jab: They skipped all animal trials because all animals were dying and went directly to people," said the May 15 post, which was viewed tens of thousands of times.

The post and others like it were flagged as part of Facebook’s efforts to combat false news and misinformation on its News Feed. (Read more about our partnership with Facebook.) 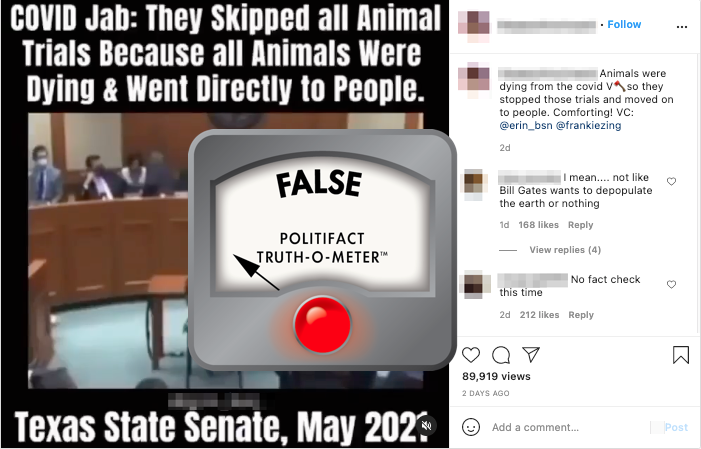 The three vaccines authorized for emergency use in the U.S. — the two-dose Pfizer-BioNTech and Moderna vaccines and the single-shot Johnson & Johnson vaccine — have been shown in clinical trials and real-world studies to be safe and effective at protecting against COVID-19. As of May 17, nearly 123 million Americans have been fully vaccinated, or 37% of the population.

While the vaccines in use in the U.S. were developed at an accelerated pace, claims that they weren’t tested on animals are inaccurate. Pfizer and Moderna got approval to test their shots on animals while simultaneously running Phase I trials on humans.

"Animal studies were indeed conducted with each of the COVID-19 vaccines in widespread use, even before large-scale human studies began," said John Grabenstein, associate director for scientific communications at the Immunization Action Coalition. "The truth is the exact opposite of the misinformation these rumors are trying to spread."

Pfizer, Moderna and Johnson & Johnson all announced results from various animal studies in press releases. The data were also published in academic journals and summarized in decision memos from the U.S. Food and Drug Administration as part of the emergency authorization process. The animal studies included tests on mice, rhesus macaque monkeys, and hamsters.

"The most important of these animal studies were highly reassuring, because they showed that vaccinated monkeys intentionally challenged with the COVID-19 virus were actually protected from disease and death, compared to unvaccinated monkeys that were vulnerable to infection," Grabenstein said.

The AstraZeneca vaccine approved for use in many other countries was also tested on animals, according to fact-checkers in Ireland.

The FDA lists laboratory research and testing in animals as a key part of the U.S.’s Emergency Use Authorization process. An agency spokesperson pointed to guidance specifying that EUA requests "should address," among other things, "data from studies in a relevant animal model."

Chris Magee, the head of policy and media at Understanding Animal Research, a British nonprofit, told Full Fact that if animals had actually started dying during the tests, any Phase 1 human trials happening concurrently would have immediately halted. That was not the case.

Full Fact and other fact-checkers, including the Associated Press, Reuters, the Dispatch and the Journal, also determined the social media claims about animal trials being skipped are false.

The Dispatch, "Are the COVID Vaccines Experimental? Did They Skip Animal Trials?" April 20, 2021

Reuters, "CORRECTED-Fact Check- COVID-19 vaccines are not experimental and they have not skipped trial stages," April 14, 2021

The Associated Press, "Pfizer and Moderna did not skip animal trials," Nov. 25, 2020

Email interview with John Grabenstein, associate director for scientific communications at the Immunization Action Coalition, May 17, 2021

Email interview with Alison Fennell, spokesperson for Johnson & Johnson, May 17, 2021

Email interview with Alison Hunt, press officer for the U.S. Food and Drug Administration, May 17, 2021