Democratic presidential candidates finally got their chance to take high-profile shots at frontrunner Hillary Clinton in their first debate Tuesday, highlighting her vote for the Iraq war, her flip-flop on the Trans-Pacific Partnership trade agreement and her proposed no-fly zone in Syria as weaknesses.

One thing they largely left alone: the email controversy that has grated the former secretary of state’s campaign.

"Let me say something that may not be great politics. But I think the secretary is right, and that is that the American people are sick and tired of hearing about your damn emails," said Sen. Bernie Sanders, I-Vt., as Clinton grinned and the Democratic crowd hollered.

That was one of the lighter moments among the Democrats on stage, including former Rhode Island Gov. Lincoln Chafee, former Virginia Sen. Jim Webb and former Maryland Gov. Martin O’Malley.

PolitiFact is looking into several claims from the candidates. Here's what we've checked out so far.

Sanders introduced himself as an advocate for middle-class workers who wants to redirect funding from the criminal justice system and into education and jobs for minorities.

That claim rates Half True.

At the debate, Sanders didn’t define the age range in question, but the most readily available "youth" data from the Bureau of Labor Statistics covers ages 16 to 19. For individuals age 16 to 19 in September 2015, the official unemployment rate for whites was 13.9 percent, for Hispanics it was 18.6 percent, and for African-Americans it was 31.5 percent. For individuals in that age range of all races and ethnicities, the unemployment rate was 16.3 percent.

While the rates for both minority groups are lower than the rate for whites, they are still well below the figures Sanders offered at the debate.

So what’s going on? Sanders is referring to a left-of-center think tank study that looked at high school graduates who were not enrolled in further schooling. They also counted not just unemployed workers, but those were working part-time due to the weak economy.

Sanders didn’t make clear that he was referring to a non-standard unemployment rate.

Clinton announced last week that she no longer supports the international trade deal, despite supporting it while serving as secretary of state -- once calling it the "gold standard." CNN anchor and debate moderator Anderson Cooper picked up on those words and asked Clinton about her reversal.

"I did say, when I was secretary of state, three years ago, that I hoped it would be the gold standard," Clinton said. "It was just finally negotiated last week, and in looking at it, it didn't meet my standards. My standards for more new, good jobs for Americans, for raising wages for Americans. And I want to make sure that I can look into the eyes of any middle-class American and say, ‘this will help raise your wages.’ And I concluded I could not."

Her claim rates Half True.

Clinton’s phrasing -- that she said she "hoped it would be the gold standard" -- implies that she was undecided on the TPP. But that doesn’t exactly match up to her prior comments. We found that her previous remarks actually gave the impression that she had confidence in the deal as it stood.

In Australia in 2012, Clinton delivered remarks on the general topic of the U.S.-Australia relationship. Here’s everything she said about the TPP in that address, with the "gold standard" comment in bold.

"So it's fair to say that our economies are entwined, and we need to keep upping our game both bilaterally and with partners across the region through agreements like the Trans-Pacific Partnership or TPP. Australia is a critical partner. This TPP sets the gold standard in trade agreements to open free, transparent, fair trade, the kind of environment that has the rule of law and a level playing field. And when negotiated, this agreement will cover 40 percent of the world's total trade and build in strong protections for workers and the environment."

So it seems Clinton is saying the TPP does, definitevely set the gold standard -- as opposed to Clinton hoping it will. This is in contrast to more recent comments where Clinton said she had concerns about the deal and that she ultimately opposes it.

Clinton tried to hit Sanders from the left during a lengthy discussion about gun policy after the country’s latest mass shooting in Oregon.

"Sen. Sanders, you voted against the Brady bill that mandated background checks and a waiting period," Clinton said. "You also supported allowing riders to bring guns in checked bags on Amtrak trains. For a decade, you said that holding gun manufacturers legally responsible for mass shootings is a bad idea. Now, you say you're reconsidering that. Which is it: Shield the gun companies from lawsuits or not?"

Her claim that Sanders voted against the Brady bill rates True.

Before it became law in 1993, the Brady Handgun Violence Prevention Act, which mandated a five-day waiting period for background checks for gun purchases, underwent many transformations. Sanders, then Vermont’s sole representative in the U.S. House of Representatives, voted against the bill in its entirety five times.

Jailed in the USA

Sanders and Clinton both brought up ending mass incarceration. Sanders said, "Today in America, we have more people in jail than any other country on Earth. It seems to me that instead of building more jails and providing more incarceration, maybe, just maybe, we should be putting money into education and jobs for our kids."

It’s likely he means the population in state and federal prisons, along with those in local jails. The latest federal census found more than 2.2 million people behind bars in the United States. A research center in England reports that China ranks second with about 1.65 million prisoners. But the Chinese figure fails to include many thousands of people in detention centers, and we don’t know how many that would be.

Regardless, based on population size, America has an incarceration rate higher than any other nation.

O'Malley highlighted Clinton's "reversals on positions on Keystone and many other things," but Clinton defended herself on the pipeline project in particular.

Unlike the Trans-Pacific Partnership, Clinton never offered explicit, repeated support for Keystone. So this rates as a No Flip on our Flip-O-Meter.

In 2010, she said the administration was "inclined" to back it, but she qualified that statement by noting that the analysis was not complete, and the administration had not taken a final position. While this shows a more positive attitude toward Keystone XL than Clinton’s position today, it was not a firm stance.

Other than that one comment, Clinton did not indicate her position on Keystone until she announced that she opposed it in September 2015.

Sanders defended his record as a democratic socialist by calling for the United States to bring its family leave policy in line with other countries.

"You see every other major country saying to moms that, when you have a baby, we're not gonna separate you from your newborn baby, because we are going to have medical and family paid leave, like every other country on Earth," he said.

His claim that "every other major country" offers paid family leave rates Mostly True, with the only caveat being that family leave isn’t a universal benefit in some countries, due to exclusions on certain workers. Otherwise, the United States is absolutely an outlier among economic peers.

Late in the debate, Sanders was asked for his position on a proposal to legalize recreational marijuana in Nevada, the site of the debate.

If he were a Nevada resident, Sanders said, "I suspect I would vote yes. And I would vote yes because I am seeing in this country too many lives being destroyed for nonviolent offenses. We have a criminal justice system that lets CEOs on Wall Street walk away, and yet we are imprisoning or giving jail sentences to young people who are smoking marijuana."

The pro-marijuana-legalization group NORML and other groups have estimated that there are 50,000 to 110,000 cannabis-only offenders in U.S. prisons, yet "most, but not all, of those incarcerated on marijuana charges are there for cultivation, sales or trafficking," said NORML executive director Allen St. Pierre.

Cooper pressed the candidates to offer their view of Edward Snowden, the government contractor considered a traitor or a hero for revealing the existence of massive national security databases of Americans’ email and phone data.

That claim rates Mostly False. The protections Clinton referenced do not seem to be as strong as she suggested.

A key 1998 law called the Intelligence Community Whistleblower Protection Act does lay out a pathway Snowden could have followed. However, there is at least a significant legal debate over whether the issues Snowden wanted to raise would fall under that law.

This story is updated as more fact-checks are published.

"We are imprisoning or giving jail sentences to young people who are smoking marijuana."
— Bernie Sanders, Tuesday, October 13th, 2015.

Says Edward Snowden "could have gotten all of the protections of being a whistleblower."
— Hillary Clinton, Tuesday, October 13th, 2015. 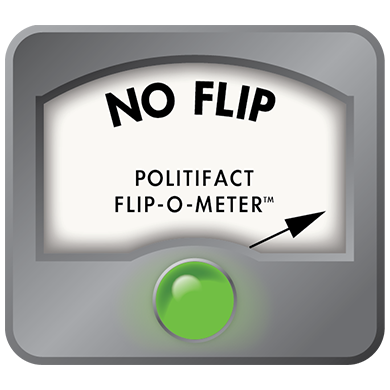 "Today in America, we have more people in jail than any other country on Earth."
— Bernie Sanders, Tuesday, October 13th, 2015.

Says as secretary of state she was reserving judgment about the Trans-Pacific Partnership and "hoped it would be the gold standard."
— Hillary Clinton, Tuesday, October 13th, 2015.