Fact-checking misinformation about Iran and a US military draft

Protesters gather during a demonstration against the killing of Iranian Revolutionary Guard Gen. Qassem Soleimani, close to United States' consulate in Istanbul on Jan. 5, 2020. (AP)

Soon after the death of Iranian Gen. Qassem Soleimani in an American drone strike, the website for the U.S. Selective Service System went down.

"Due to the spread of misinformation, our website is experiencing high traffic volumes at this time," the agency tweeted Jan. 3.

The surge of traffic resulted from speculation that Soleimani’s killing, which took place near the Baghdad airport, could provoke a war with Iran. The Iranian president promised "harsh retaliation" and the United States sent thousands of additional troops to the Middle East in preparation for a potential escalation.

As the Selective Service noted in its tweet, misinformation about conscription related to a potential war with Iran is already making the rounds on social media. Of particular concern is whether the United States has already implemented the draft (it hasn’t) and which citizens would be eligible for it.

Given the confusion, we decided to fact-check popular hoaxes and misconceptions about the draft and also provide context on how the draft works.

Who’s eligible for the draft

Much of the misinformation has to do with who is and isn’t eligible for conscription.

One post published Jan. 4 makes it seem like gay Americans are exempt. Another gives the impression that felons can’t be drafted. Both are wrong. 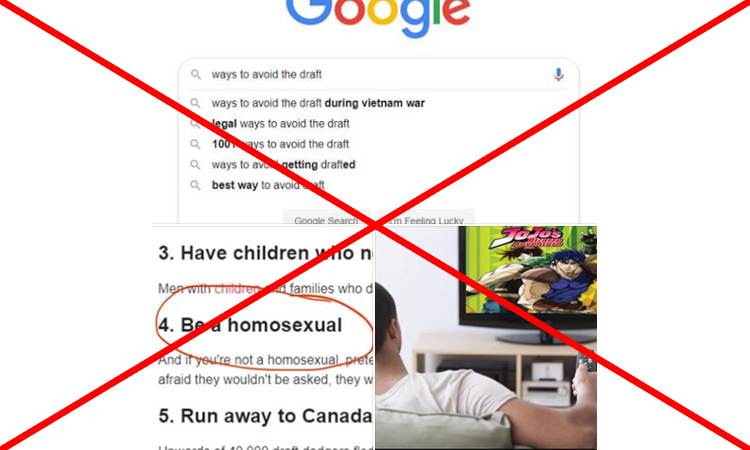 According to the Selective Service System, nearly all men in the country between the ages of 18 and 25 must register with the agency. That includes "U.S. born and naturalized citizens, parolees, undocumented immigrants, legal permanent residents, asylum seekers, refugees, and all males with visas of any kind which expired more than 30 days ago." Women are not required to register.

"This requirement was enacted by the (Jimmy) Carter administration and has been in place for almost 50 years," said Wadi Yakhour, chief of staff for the Selective Service System, in an email. "The registration requirement has been supported by every subsequent presidential administration."

Young men in hospitals or mental institutions do not have to register while they’re committed, but they must within 30 days of their release. The other people who are exempted from the draft including transgender men (transgender women are still required to register), seasonal agricultural workers, certain handicapped people and those who are already in the military.

Registration does not automatically sign men up for the military. Instead, it adds them to a database of potential recruits who could be called upon during a crisis.

RELATED: Was Trump a 'draft dodger'?

If a draft were enacted, men would be called to serve in a lottery system based on their birth year and a random number assigned to them. Then they would be evaluated for "mental, physical, and moral fitness" before joining the Armed Forces.

The draft has not been used since the tail end of the Vietnam War in the 1970s. It was used three other times in the 20th century: World War I, World War II and the Korean War.

To impose another draft, Congress and the president would have to pass legislation authorizing it. As of now, experts say that’s an unlikely prospect.

"The U.S. all-volunteer military has engaged in military conflicts of many kinds, including most recently wars in Iraq and Afghanistan, without (resorting) to the draft," said Jennifer Mittelstadt, a history professor and military expert at Rutgers University, in an email. "The nature of warfare has changed considerably since the draft, too, with less reliance on massive numbers of ground troops, and more on technologies of the air force and navy, drones, and use of special forces."

Several widely shared screenshots on Facebook claim to show tweets from President Donald Trump announcing the start of the draft. But the tweets are fake.

One of the screenshots, which was published by a popular meme page on Jan. 3, appears to be a tweet from Trump’s official account announcing the draft would start the next day. It has been shared more than 1,300 times.

An advanced search of Trump’s Twitter page shows he never published a tweet in which he announced the draft. Some websites make it easy for anyone to generate screenshots of fake tweets from official accounts.

Other screenshots posted on Facebook (and shared hundreds of times) purport to show Trump tweeting the order in which people from certain states will be drafted into the military for a potential war with Iran.

"Every boy that is between the ages of 18 and 25 you guys will receive a message from @USArmy on when you will be drafted for world war 3 so keep dms open," reads one of the screenshotted tweets. 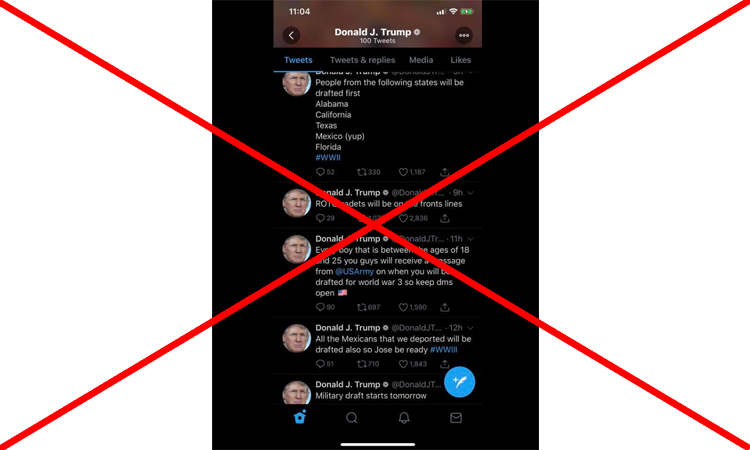 Those tweets are also fake.

Trump has not tweeted about a draft connected to tensions with Iran, and the account pictured in the screenshots is not the handle associated with the president’s official account. The imposter Twitter account has been suspended. And in the case of a draft, the Selective Service System would notify those who are drafted, not the Army.

Here’s a taste of Trump’s authentic tweets about the conflict with Iran.

Amid early reports that Soleimani had been killed, Trump tweeted a photo of an American flag. He said Jan. 4 that, if Iran targets American assets, the U.S. military would potentially strike dozens of Iranian cultural sites — a potential war crime and violation of international law. Later that night, the president tweeted another warning for Iran.

"If they attack again, which I would strongly advise them not to do, we will hit them harder than they have ever been hit before!" he said.

See a post about Soleimani’s death, Iran or the U.S. draft that seems fishy? Send it to [email protected].