Tim Scott
stated on November 26, 2017 in an interview on ABC's "This Week":
"If you don't pay income taxes ... you'll have more money" under the Republican tax plan.

Days before the Senate was slated to take up the tax bill, Scott was interviewed by Martha Raddatz on ABC’s This Week. Here’s a portion of their exchange about the Senate legislation:

Raddatz: "About 45 percent of Americans don't pay income tax, and many of those are the working poor. So, how does it help them?"

Scott: "Well, if you don't pay income taxes and we increase your refund by 40 percent, that is a direct dollar impact. In other words, you'll have more money to use to keep those ends together, those single mothers like mine, who are working paycheck to paycheck, they will now not get a $9,300 deduction."

To streamline the wording, we decided to fact-check his overall point that a typical family not currently paying income taxes would receive more money under the overhaul. (His office did not object to that paraphrase.)

These people would not be getting an increased "refund of 40 percent," or a "$9,300 deduction," even though Scott said that. Those changes would not improve the position of people who already do not pay income taxes. (Scott’s office said those points referred to an earlier discussion in the interview.)

The 40 percent figure refers to early estimates by the Republican staff of the Senate Finance Committee about how Americans with specific income and family structures would gain from passage of the bill. (More recent projections are here.) As for the $9,300 deduction, that’s roughly the amount the Senate bill would increase the current standard deduction for single heads of households. 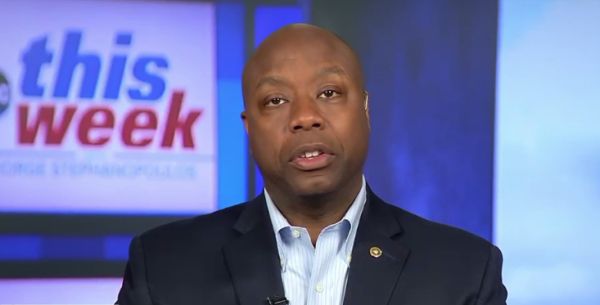 Again, those don't apply here, even though they were in Scott's claim.

So we wondered how it would be possible for Americans who already don't pay income taxes to see money from the proposed tax overhaul.

If a household already was paying no taxes, having more money in their pocket would require either getting more money back from the government through the tax process, or arguing that the economic growth spurred by the tax bill would inevitably generate raises for the workers in that household.

However, the GOP tax bills do not expand the earned income tax credit, which is a refundable credit designed to put more money in the pockets of the working poor. If anything, the bills' use of a slower-growing inflation measure called chained CPI would make EITC refunds less valuable over time. And another refundable tax credit, the child tax credit, would see tighter eligibility rules for the refundable portion, which could result in some households losing that portion of the credit.

Meanwhile, even those who argue that the bill’s corporate and income tax cuts will spur economic growth can’t guarantee that any particular American will receive a raise.

As it turns out, Scott’s office offered a different justification -- one involving the proposal in the Senate bill to rescind the individual mandate for purchasing health insurance. That provision of the Affordable Care Act requires that Americans who don’t have health insurance to pay a tax penalty.

"By repealing the individual mandate, a tax paid overwhelmingly by the middle and working classes, the Senate bill removes a burden placed on low-income families," said Michele Exner, a spokeswoman for Scott.

Here’s how Scott’s example of a family saving money from the tax bill would work.

Say you’re a family that did not earn enough to face a tax burden. Currently, you’d have a choice regarding health coverage -- either pay for insurance, at roughly $2,500 a year after subsidies for a typical Affordable Care Act plan, or forgo insurance and pay the penalty. This year, the penalty is either 2.5 percent of income, or $695 per adult and $347.50 per child, up to a family maximum of $2,085 —whichever is higher.

If the individual mandate is rescinded, this family would have a different choice: Either keep paying for insurance, or drop their insurance and save whatever their individual-mandate penalty would have been.

Here’s what could happen

This scenario could leave certain low-income households with more money in their pocket -- but there's no guarantee.

One possibility is that a family would keep their insurance despite the removal of the individual mandate; in that case, they wouldn’t be assured of saving any money.

Health care experts say that if too many young and healthy Americans go without insurance, the premiums for everyone else will go up. If that scenario plays out, this group might end up with less money in their pocket, contrary to Scott’s assertion.

The alternative would be for this family to drop their insurance. This could lead to a gain in pocket money, depending on how much they spend on health care. That's because the family would now be on the hook for all of their medical expenses. If they were blessed with luck and stayed healthy, they would come out ahead compared to the status quo. But if they fell seriously ill, the costs could be ruinous.

"Whether I will have more or less money in my pocket at the end of the year depends on whether or not I incur sufficiently higher medical expenses to wipe out the savings," said Daniel Shaviro, a New York University law professor who specializes in tax law. "Even insofar as the statement is literally true in some cases, it’s fundamentally dishonest and misleading."

What an independent analysis shows

So how would lower- to middle-income families fare overall under the Senate bill that includes the elimination of the individual mandate?

The Joint Committee on Taxation -- Congress’ nonpartisan office for analyzing tax proposals -- has found that the provisions in the Senate bill, taken collectively, would increase tax collection from the lowest income ranges.

In 2019, each of the three income ranges below $30,000 would see increases in tax revenue. (This refers to cumulative totals for all households within that income range; individual households may see their taxes go up or down, depending on their specific situation.) And by 2027, every income range below $75,000 would see a collective tax increase. Here’s the summary table. (This assumes no further action from Congress during that time.)

Lower-income Americans could get another hit from the Republican tax proposal if budget cuts are needed to offset the loss of federal tax revenue for programs that help the poor, said Gary McGill, director of the Fisher School of Accounting at the University of Florida.

All in all, McGill said he finds Scott's argument to be an odd one.

That’s more of a gamble than anything close to a certainty. We rate this statement False.

PolitiFact, "Do more than half of all tax filers really pay no federal income tax?" Nov. 17, 2011

Email interview with Gary McGill, director of the Fisher School of Accounting at the University of Florida, Nov. 28, 2017