Viral image
stated on March 18, 2019 in a Facebook post:
Shows a photo of two similar Wall Street Journal newspapers with different headlines about President Donald Trump, and describes the editions as, "Same paper, same dates, different markets. What did you just learn? Feeling manipulated yet?"

As claims of media bias plague news organizations around the world, one widely shared social media post is helping to fuel that fire.

The post features a photo of two copies of the Wall Street Journal, placed side-by-side. The papers appear to be from the same day with the same centerpiece story — but with starkly different headlines.

Both newspapers feature a front-page photo of then-Republican presidential nominee Donald Trump shaking hands with then-Mexican president Enrique Peña Nieto. But, below the centerpiece photo, one paper’s headline reads, "Trump softens his tone," while the other says, "Trump talks tough on wall."

In the Facebook post, text along the bottom says, "Same paper, same dates, different markets. What did you just learn? Feeling manipulated yet?"

The post, shared on March 18, was flagged as part of Facebook’s efforts to combat false news and misinformation on its News Feed. (Read more about our partnership with Facebook.)

The photo itself is authentic and displays two real copies of the Wall Street Journal from the same day — but the opposing headline editions represent editions from different times in the day.

The stories underneath the differing headlines are different.

Colleen Schwartz, vice president of communications at the Wall Street Journal, told PolitiFact the papers are from different times in the day according to a printing schedule designed to make sure papers are delivered on time to various readership areas. These two editions went to different geographical locations, another Wall Street Journal spokesperson confirmed.

"There are different editions of the Journal published at different times during the evening in order to meet delivery demands," Schwartz wrote in an email. "This often means that the content is updated to reflect new reporting on news and events as they evolve. The different editions are distinguishable by the number of stars in the upper right corner (under the L in Journal)."

Newspapers will sometimes go through multiple revisions throughout the day and usually mark each to distinguish the edition. As Schwartz stated, the Wall Street Journal labels its editions by the number of stars in the top right corner. 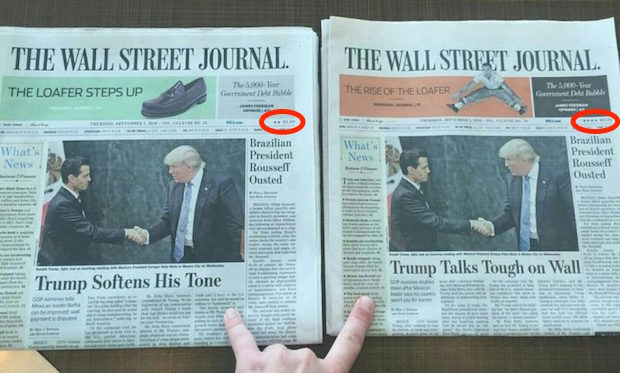 Different print editions of newspapers are often distributed to different geographical areas based on the time it takes to get newly printed papers from printing facilities to their destinations on time. The two editions under scrutiny here feature two different versions of the story based on the fact that the news story itself was developing throughout the day.

Steve Severinghaus, senior director of communications for the Wall Street Journal, said it’s hard to pinpoint by looking at the pictures exactly where each of these two editions went. That’s because the Wall Street Journal utilizes 26 printing plants across the nation to print and then distribute the various editions in a timely fashion. If the printing plant in one area is located in an urban center, for example, then readers inside the city are more likely to get a later, more up-to-date edition than those in a rural area that demands more delivery truck travel time (and therefore an earlier print edition).

But why such different headlines? Well, a lot can change over the course of a day.

The stories in question were published in the print version of the Journal on Sept. 1, 2016, and covered Donald Trump’s Aug. 31 visit with former Mexican president Enrique Peña Nieto, as well as a campaign rally stop he made in Phoenix later that day.

The final web version of the story is found online here with a Sept. 1, 2016, 1:55 a.m. time stamp, and features the headline, "Donald Trump Vows Deportations After Easing Tone in Meeting With Mexican President Enrique Peña Nieto." An earlier web version of the same story, which we found at the same url using the web archive tool Wayback Machine, is dated Aug. 31, 8:31 p.m. and has a headline that reads "Donald Trump Eases Tone on Immigration, Trade After Meeting With Mexican President Enrique Peña Nieto."

The meeting between Trump and Nieto, according to reports, was subdued and struck a cooperative tone, with Trump saying at the joint news conference in Mexico that he and Peña Nieto didn’t discuss who would pay for his proposed border wall along the U.S.-Mexico border. That’s why the earlier version of the print story and the web story stress Trump’s "ease" of tone.

But hours later at the rally — after Nieto reportedly tweeted that he told Trump Mexico would not pay for the wall — Trump indeed changed his tone, reiterating his tough stance on immigration and insisting that Mexico will pay for the wall. That’s why the later version of the story (and the headline) is different; it contains news of more developments and Trump’s fluctuating rhetoric on the topic over the course of the day.

"The edition on the left was published after Trump met with Mexican President Enrique Pena Nieto early in the day (and referenced the seemingly cooperative tone of their discussion). The edition on the right was published after Trump delivered a speech on immigration later in the day (and referenced Trump's reasserting his stance that he would force Mexico to pay for the building of a wall along the US Mexico border)," Schwartz wrote in an email to PolitiFact

"The images represent two different editions, published at different times, with different stories according to the developing news. The headlines represent the news at the time of publication—before and after his speech."

A photo shared on the internet shows two copies of the Wall Street Journal from the same day, but with two different headlines, and suggests the organization distributed it to different markets to influence readers.

While the photo is real and depicts two legitimate editions of the Journal, it is actually displaying two different editions of the paper that were produced at different times of the day and with different stories—one written before Trump made a speech at a rally and one after. We were not able to pinpoint what geographical areas these two papers were circulated in. But we do know that they were distributed in separate areas, as different editions are produced in response to geography-based delivery schedules.

It is not accurate to say that the Wall Street Journal printed the same story with two different headlines in an attempt to influence readers in different markets. The paper altered its headlines and story in response to developing news and according to different print deadlines. We rate this claim False.