The post, which includes a quote about President Donald Trump alongside an image of Nunes, was shared in a popular liberal Facebook page called Go Left. The post claims to be based on leaked audio from July 2019.

"Defending Trump is more important than the United States," the image reads.

The post was flagged as part of Facebook’s efforts to combat false news and misinformation on its News Feed. (Read more about our partnership with Facebook.) It has been shared more than 1,400 times on several social media platforms. 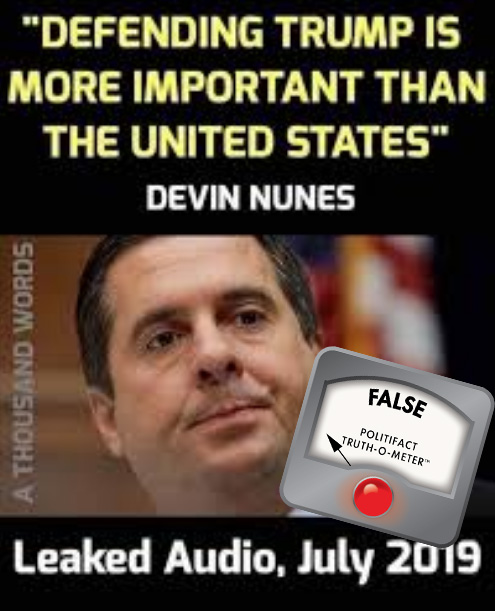 We reached out to Go Left for its evidence for the post, but we haven’t heard back.

As the ranking member of the House Intelligence Committee, Nunes was one of Trump’s staunchest defenders during the president’s impeachment. But the Facebook post is inaccurate — the leaked audio it cites was recorded in July 2018, not 2019. And Nunes didn’t say anything close to the quote Go Left published.

The audio was recorded at a private fundraiser for Rep. Cathy McMorris Rodgers, R-Wash., that Nunes attended in July 2018. MSNBC first obtained and aired the clips during the Rachel Maddow Show on Aug. 8, 2018.

"So therein lies, so it’s like your classic Catch-22 situation where we were at a – this puts us in such a tough spot. If (then-Attorney General Jeff) Sessions won’t unrecuse and Mueller won’t clear the president, we’re the only ones. Which is really the danger," Nunes said in one of the clips that MSNBC published. "That’s why I keep, and thank you for saying it by the way, I mean we have to keep all these seats. We have to keep the majority. If we do not keep the majority, all of this goes away."

The audio shows that Nunes was interested in defending Trump from the Mueller investigation to try and keep the Republican majority in Congress ahead of the midterm elections. But none of the four clips that MSNBC published included Nunes saying anything close to "defending Trump is more important than the United States." That distortion was added later by several liberal blogs and YouTube videos.

We reached out to Nunes’ press office for comment, but we haven’t heard back.

L. Lin Wood
stated on January 18, 2021 an interview with the Patriotically Correct Radio Show:
"China was behind the interference and the effort to overthrow our government and the election, election fraud."

Donald Trump
stated on January 6, 2021 a speech on the Ellipse outside the White House:
"We won. We won in a landslide. This was a landslide.”

Facebook posts
stated on December 28, 2020 a video:
The Christmas Day explosion in Nashville, Tenn., was the result of a “missile strike.”

Facebook posts
stated on December 15, 2020 text posts and screenshots:
“One of the first nurses to receive the vaccine in AL is now dead.”

Bloggers
stated on December 6, 2020 an article on GreenMedInfo.com:
"The FDA knows that rushed-to-market COVID-19 vaccines may cause a wide range of life-threatening side effects, including death."