Conflicting narratives continue to circulate about the confrontation outside a Columbus, Ohio, foster home that led to the deadly shooting of 16-year-old Ma’Khia Bryant.

Some claim Bryant was attacking another person when she was shot; others say she was acting in self-defense.

"Please DO NOT ignore this!!!" one viral Facebook post starts off saying. "As the George Floyd verdict was being announced, Columbus Ohio Police killed 15 year old Makhia Bryant. She called the police as she was about to get jumped. She had a knife in her hand for self defense, but when officers arrived it was on the ground away from her. The officer immediately opened fired shooting her 4x’s."

Some early reports indicated Bryant was 15 years old, but later corrected her age as 16. There has been no confirmation of whether it was Bryant who first called the police for help, and we don’t know the details of what happened before the police arrived.

But body camera footage from a responding officer shows that a knife was in Bryant’s hand, not on the ground, when the officer first fired his gun.

Police received a 911 call around 4:32 p.m. about a disturbance on the southeastern side of the city. A female caller reported that a group of women were trying to fight with her and stab her and others. Then she hung up.

Officers from the Columbus police arrived about 13 minutes later and reported that an officer was involved in a shooting. Police later identified the officer as Nicholas Reardon, who joined the department in December 2019.

Reardon’s body camera footage, released by the police, shows the officer approaching a chaotic scene in front of a house. As he walks up, the video shows a female being pushed to the ground and Reardon pointing his weapon in the direction of the struggle while a man runs up and appears to kick the female on the ground.

Viral image
stated on January 6, 2023 in a Facebook post
Coronavirus is a Latin word for “heart attack virus.”

Soon after, Bryant is seen running toward another female next to a car parked in the driveway, while waving a knife. Reardon can be heard yelling "get down" a couple of times before he starts shooting. 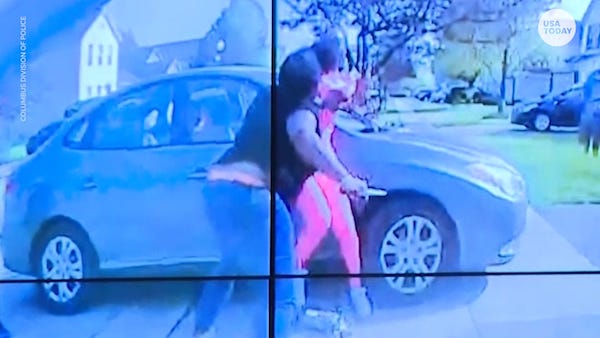 Other than the body camera video, police haven’t shared many more details about the shooting, citing a pending investigation by the Ohio Bureau of Criminal Investigation.

The knife can be seen on the ground after the shooting. It’s not clear from the video when Bryant dropped it.

Reardon shot Bryant four times. In a news conference, interim Police Chief Michael Woods was asked whether officers are trained to use their service weapons over a stun gun in such a situation.

"When officers are faced with someone employing deadly force, deadly force can be the response the officer gives," Woods said, in an apparent reference to the knife that was seen in Bryant’s hand.

The contradicting accounts may have originated from interviews given by Bryant’s family before the footage was released. Bryant’s aunt, Hazel Bryant, told the Columbus Dispatch that her niece dropped the knife before police fired, and other family members and neighbors told local news outlets that it was Bryant who called the police and was acting in self-defense.

Meanwhile, activists in Columbus are calling for a federal probe of the shooting and the city’s mayor, Democrat Andrew Ginther, told reporters that the investigation "will determine if the officer involved was wrong and, if he was, we will hold him accountable."

A Facebook post claims that the knife was on the ground when police arrived at the scene of the deadly shooting of Ma’Khia Bryant.

We aren’t judging the officer’s actions, but body camera footage shows that the claim about the knife is inaccurate. A knife can be seen in Bryant’s hand when the officer began to fire his gun.