Facebook posts
stated on July 11, 2012 in Facebook posts:
A photo shows paleontologists in Greece discovering the skeleton of a giant.

Social media users are recirculating a pair of Facebook posts from 2012 that purport to show paleontologists in Greece uncovering the skeletal remains of a giant, including a massive skull.

Although they have been shared thousands of times, the images are manipulated. The original photo does not show a giant human skull at the excavation site.

The Facebook posts were flagged as part of the company’s efforts to combat false news and misinformation on its News Feed. (Read more about our partnership with Facebook.)

Reverse image searches revealed that the images are manipulated versions of a photograph from University of Chicago paleontologist Paul Sereno’s discovery of a plant-eating dinosaur species, Jobaria, during a dig in the Sahara of central Niger, an African country, in the 1990s.

The original photograph, published in several places by the University of Chicago and also in a 1999 news report from BBC News, does not include the giant skull seen in the Facebook posts.

"It is my photograph of my team that I took in Niger in 1993 during the excavation of a dinosaur skeleton that I would later name Jobaria," Sereno said in an email to PolitiFact. 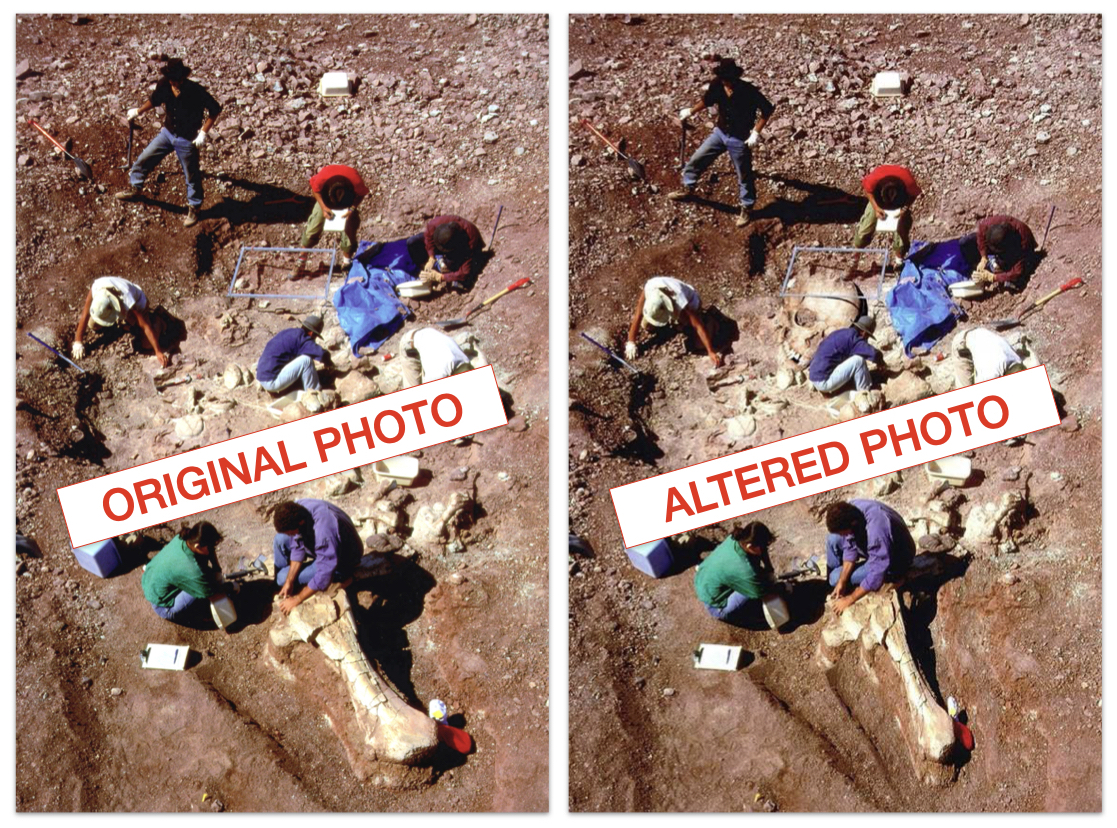 An illustration shows Sereno's original photo beside the edited version, which recirculated on Facebook in October 2021.

The results from Sereno’s excavation were published in 1999 in the journal Science, and the discovery was covered at the time by the Washington Post, the Chicago Tribune, National Geographic and other outlets. The long-necked dinosaur weighed an estimated 20 tons and lived approximately 135 million years ago, according to those reports.

"With 95 percent of its skeleton preserved, the new species stands as the most complete long-necked dinosaur ever discovered from the Cretaceous Period," Sereno said in a 1999 news release documenting his team’s findings.

In 2019, Snopes fact-checked the same two manipulated images purporting to show a giant skull among the bones Sereno’s team dug out in Niger. The outlet reported that the altered images have been circulating online since as early as 2004. Fact-checkers have also debunked several other similarly altered photos claiming to show the remains of giants.

Email interview with Paul Sereno, paleontologist and professor of organismal Biology and anatomy at the University of Chicago, Oct. 12, 2021