"Finnish Court rules sex with children is permitted," states a screenshot of a headline.

Text below that adds: "Finland’s Supreme Court has ruled that sex with children as young as 10 is not ‘rape’ if you come from a culture where sexual relations between adults and kids is ‘normal’."

This isn’t true. Sex with children is not legal or "permitted" in Finland. 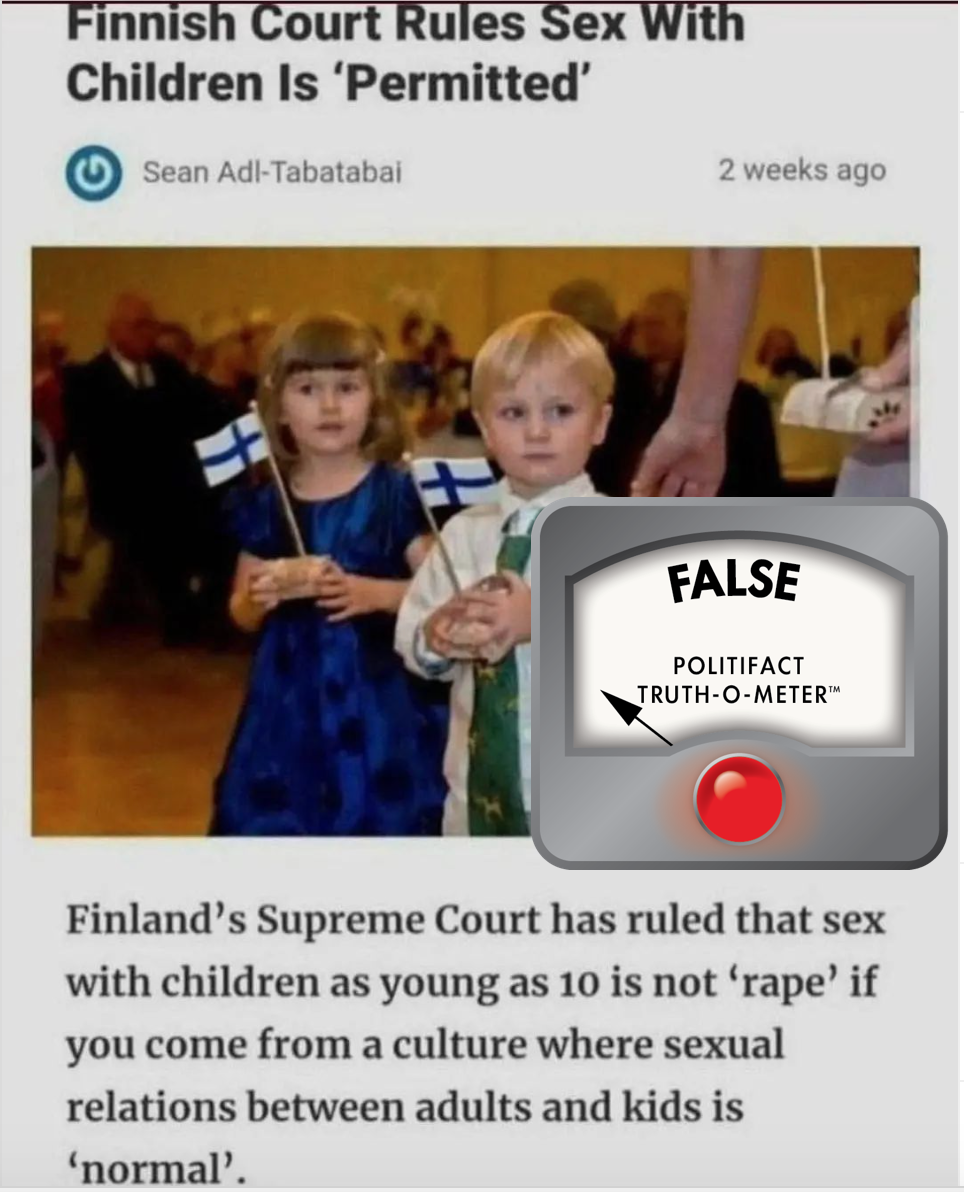 The age of consent in the country is 16 years old. Children age 15 or younger in Finland are not legally able to consent to sexual activity, and such activity may result in charges of statutory rape or the equivalent local law.

While the claim is wrong, it stems from a real and controversial 2018 court ruling that led Finland to eventually strengthen its child rape laws.

Donald Trump
stated on January 10, 2023 in an interview
Joe Biden as vice president didn't "have the right to declassify" documents.

Finland's Supreme Court ruled against an appeal to increase the punishment of a man who received a three-year "absolute" prison sentence from a lower court for aggravated sexual abuse of a 10-year-old girl.

In Finland, aggravated sexual abuse of a child carries a one- to 10-year prison sentence. The appeal sought to increase the man’s charge to aggravated rape, which carries a sentence of two to 10 years in prison.

At the time, an aggravated rape charge only applied to cases where violence was involved. In its dismissal, the court determined that the case had not been established that the sexual intercourse "had taken place through violence or that the child had been in a state of fear or other helplessness."

But the court judgment sparked backlash across the country, with many arguing that there is no way a child could know or be in control of what might be happening in such a situation.

In 2019, after thousands signed a petition calling for sexual offense legislation to be revamped, Finland announced it was strengthening its laws to ensure that sex without consent or with children is always punishable as rape.

This isn’t true. It’s illegal for adults to have sexual relations with children under 16 in Finland. A 2018 court ruling about what qualifies as rape prompted Finland to update and strengthen its child sex abuse laws. The country has never ruled that sex with children is legal.

The Independent, Finland to change law to recognise sex without consent as rape, Jan. 17, 2019

Finnish Supreme Court, The application for leave to appeal was rejected in a case concerning a sexual offense against a 10-year-old girl, 2018