Dinesh D’Souza falsely claimed that recently released footage of the Jan. 6 insurrection shows the police guarding the U.S. Capitol using "massive amounts of force against unarmed Trump supporters" — and he suggested that the government is sitting on more video that would show the same.

The claim flew in the face of what other footage, court documents and testimony have shown about the rioters’ violence and use of real and makeshift weapons against police.

D’Souza, a conservative commentator, made the claim on Fox News host Laura Ingraham’s show two days before the anniversary of the attack, which left about 140 police officers injured.

"If you follow Jan. 6 at the granular level with the facts that are coming out slowly, they are coming out because the government has been very reluctant to release footage, particularly footage of what happened in the tunnel on Jan. 6, where you now begin to see these cops using massive amounts of force against unarmed Trump supporters, including women," D’Souza said.

"The death of Rosanne Boyland is now being called into question," D’Souza continued. "Was she the second Trump supporter that was killed by the authorities?"

Boyland, a 34-year-old Georgia woman who supported Trump and believed the QAnon conspiracy theory, was one of the four people who died as the crowd fought with police.

The D.C. Medical Examiner’s Office said she died of accidental acute amphetamine intoxication, and videos compiled by the New York Times show her getting trampled in the crush of the mob as it surged against police lines near the Lower West Terrace tunnel. Prosecutors have said officers tried to reach Boyland to administer aid but were assaulted by other rioters.

D’Souza’s Fox News appearance was not his first attempt at offering a counter-narrative surrounding the events of Jan. 6, 2021. In the year since the attack, he has claimed the event was "a bunch of rowdy people walking through hallways," said it was a "boisterous walk-through," and likened it to the Rev. Martin Luther King Jr.’s March on Washington in 1963. He has said repeatedly that the attack was not an insurrection or coup, and that the rioters charged for crimes are "political prisoners."

PolitiFact named the lies about the Capitol attack and its significance the 2021 Lie of the Year.

"D’Souza’s quote falls squarely into a larger retelling of the history of Jan. 6 … as a peaceful protest by patriotic Americans that only turned violent because of the actions of police," said Michael Jensen, a senior researcher at the University of Maryland’s National Consortium for the Study of Terrorism and Responses to Terrorism. "Countless hours of video captured by both the authorities and the rioters themselves clearly counter this reimagined take on Jan. 6."

But court documents from those cases show members of the crowd brandished real and makeshift weapons.

The rioters wielded bats, knives, crutches, flagpoles, skateboards, hockey sticks, zip ties, chemical sprays, and a fire extinguisher, the filings show. They stole and used police batons and riot shields. Several had guns on them or stashed nearby, according to court documents.

As of Jan. 1, more than 225 people had been charged with assaulting, resisting or impeding officers or employees, the Justice Department said, including over 75 charged with using a deadly or dangerous weapon or causing serious bodily injury to an officer.

In a series of emails to PolitiFact, D’Souza stood by his statement.

He told PolitiFact he was referring specifically to what happened in the tunnel at the Capitol’s Lower West Terrace and surrounding Boyland’s death.

"If you read my quotation, it applies to the violence in the tunnel, and I specifically referenced Rosanne Boyland, who was unarmed," he said in one email.

But zooming in on the tunnel doesn’t make D’Souza’s claim more accurate. There’s no evidence that the footage that has not yet been released would, either.

"Claims that the mob that invaded the Capitol during the Jan. 6 insurrection, or specifically the mob that intended to breach the terrace tunnel, were ‘unarmed’ is an utter falsehood disproved by facts and statements from those on the scene," said Brian Levin, the director of the Center for the Study of Hate & Extremism at California State University, San Bernardino.

The Justice Department in December released three hours of surveillance footage showing the scene from the tunnel at the Capitol’s Lower West Terrace.

The footage shows outnumbered officers retreating into the tunnel before rioters piled in behind them and punched, kicked, climbed over and threw things at them in an effort to push through.

The brawl in the tunnel was where Metropolitan Police Officer Daniel Hodges got crushed against a door.

It was also where Metropolitan Police Officer Michael Fanone was dragged into the crowd, stripped of his badge, beaten, tased and threatened with chants to "kill him with his own gun." Fanone later testified that he fell unconscious and suffered a heart attack.

"It was like a war zone," Fanone told CNN in an interview aired on the anniversary of the attack. "It was just littered with weapons, debris. CS gas, like residual gas just kind of floating in the air, created this like mist, or like a haze."

Metropolitan Police Commander Ramey Kyle said in the same interview that he felt "some of the most violent people in that crowd" were "concentrated at these (tunnel) doors."

According to court documents, those rioters included:

Other rioters fought police at several other points on the Capitol grounds, videos show.

"These rioters were armed with blunt objects, stun guns, and chemical sprays and aggressively forced the Capitol Police into a precarious position inside the tunnel," Jensen said. "The police remained restrained, using non-lethal force to stop the advances of the mob." 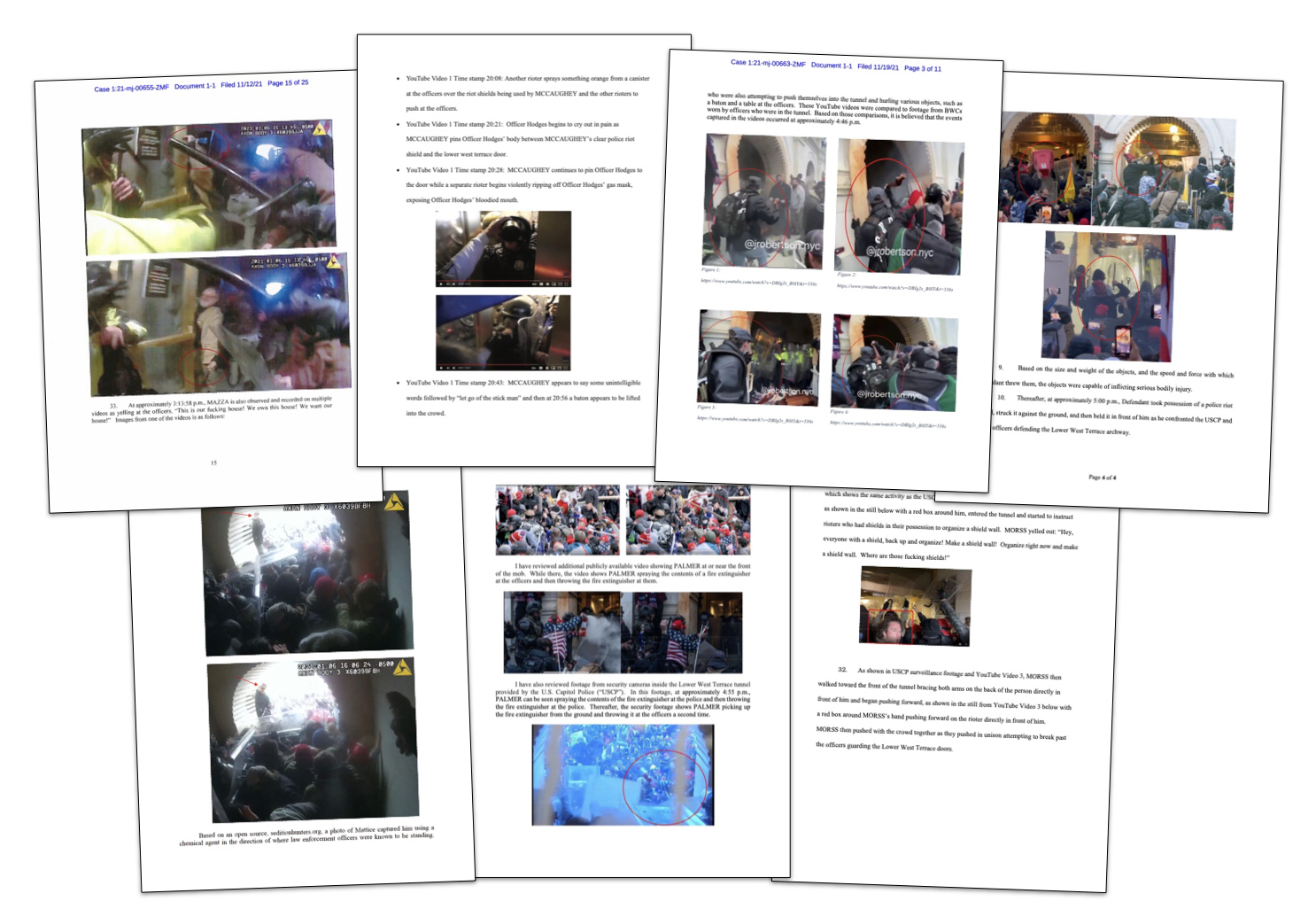 In one email to PolitiFact, D’Souza cited a civil lawsuit filed by Victoria White, who claims the police repeatedly punched her and struck her with a metal baton. White faces several charges, including impeding or attempting to impede officers.

Joseph McBride, White’s attorney, told PolitiFact the tunnel footage shows "an absolutely brutal beating that she endured." A video he posted to Rumble zeroes in on one officer in the tunnel who swung a baton over the front line of police as the standoff with the rioters continued.

D’Souza also shared a Twitter thread that claimed to identify Boyland in the new footage and said other body camera footage appeared to show an officer hitting her "still body" with a baton.

But Newsweek parsed through videos of the same moment in November, after other social media users circulated a misleading, doctored video and claimed it showed the police beating Boyland. Newsweek rated those claims false, reporting that the officer in question was actually attempting to hit back at a rioter who was wielding a hockey stick as a weapon.

D’Souza said recently released footage "of what happened in the tunnel on Jan. 6" shows "cops using massive amounts of force against unarmed Trump supporters, including women."

D’Souza’s claim leaves the impression that Trump supporters were unarmed and helpless in the face of brutal beatings by police, but that’s a drastic recasting of what happened at the Capitol on Jan. 6.

The reality is that, in the Lower West Terrace tunnel and elsewhere, the police protecting the Capitol were overwhelmed by rioters who attacked them with real and makeshift weapons. Two experts said the force the police used in return was restrained.

The Washington Post, "D.C. medical examiner releases cause of death for four people who died during Capitol riot," April 7, 2021

The New York Times, "Videos Show How Rioter Was Trampled in Stampede at Capitol," Jan. 15, 2021

PolitiFact, "Misinformation and the Jan. 6 insurrection: When ‘patriot warriors’ were fed lies," June 30, 2021

Email interview with Michael Jensen, senior researcher at the University of Maryland’s National Consortium for the Study of Terrorism and Responses to Terrorism, Jan. 7, 2022

Email interview with Brian Levin, professor of criminal justice and the director of the Center for the Study of Hate & Extremism at California State University, San Bernardino, Jan. 7, 2022