Frustrated by high gas prices, Facebook users are sharing a lengthy message purportedly written by Brice Cromwell, a BP oil executive who claims to have 10 years of experience in the industry. 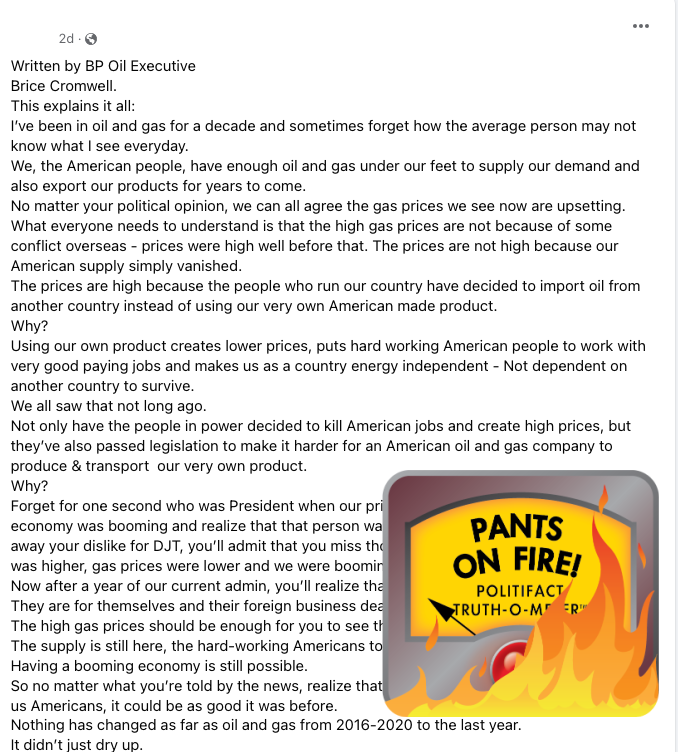 Screenshot of one of the Facebook posts that attributes a message about gas prices to Brice Cromwell, a fake BP Oil executive.

A couple of things about this post show there’s something afoot. Usually, a message from a top company executive can be traced to a credible source and not just found in a message copied and pasted on Facebook.

But even more striking is this: There is no executive named Brice Cromwell at BP.

PolitiFact searched the list of executives found on BP’s website and did not find anyone named Brice Cromwell. A Google search also did not turn up that name in connection with the company.

"We can confirm we do not currently have an employee with that name, and this text did not come from BP," said Megan Baldino, head of corporate communications for BP America.

In an initial search, we found that the message was shared more than 50 times on Facebook within the last week. By conducting a search on CrowdTangle, a social media search tool from Meta, the earliest version of this post we could find was shared in a Facebook group on March 8, 2022. It doesn’t include the name Brice Cromwell.

Beyond the attribution, there is an issue with the substance of the post. While it claims the Biden administration is responsible for high gas prices by allowing oil imports, the truth is that gas prices have little to do with the president, no matter who is in office.

We’ve reported previously that gas prices are largely caused by the global supply and demand of oil, in addition to international events and inflation. Also, prices are heavily influenced by the Organization of the Petroleum Exporting Countries, which controls most of the world’s oil supply.

Instagram posts
stated on November 17, 2022 in a post
“Joe Biden is being investigated for human trafficking and is guilty.”

And while the Facebook post claims that low gas prices were the work of former President Donald Trump, the truth is that it was due largely to the COVID-19 pandemic, when people traveled far less and pushed down demand. At that time, the ​​U.S. Energy Information Administration reported that the price of oil hit a record low of $9.12 per barrel. That translated to around $1.80 per gallon at American gas pumps.

"The price of oil has gone from below $10 a barrel, during depths of a pandemic, to about $120 a barrel right now,"  said Alan Gin, associate professor of economics at the University of San Diego. "And so, you get the price of oil going up. That’s going to cause the price of gas then to be higher as well."

Prices had started to increase as pandemic recovery slowly began. But the sharp uptick came when Russia invaded Ukraine, and in response, global nations cut back on importing Russian oil. Prices had spiked to a national average of $4.92 as of June 7, according to the American Automobile Association.

Gin also highlighted another portion of the claim stating that the amount of oil in the U.S. hasn’t changed between 2016 and 2020. The post said using these reserves can supply the country’s needs and lower the price of gas.

That’s not true, said Gin. He stated that in 2019-2020, the U.S. supply of oil shale, which is used to produce oil and gas, plummeted after producers first borrowed to increase production and then slashed their output due to decreased demand.

"The price of oil was driven downwards as a result of the pandemic and the declining demand," he said. "Basically, a lot of companies just went under."

Facebook posts claimed to share a written message from a BP oil executive named Brice Cromwell. The text blames the Biden administration for high gas prices, stating that they’re due to America choosing to import oil from other countries.

The text is phony — BP oil confirmed that no one named Brice Cromwell works for the company. In addition, the Facebook post has appeared as early as March without naming Cromwell.

Fluctuations in oil and gas prices are not caused by the president, no matter who is in office. Experts and data show that the rise and fall of gas prices is due to the global supply and demand, inflation and worldwide events.

PolitiFact, Gas prices peaked under Bush, but they don’t correlate with who’s in office, Oct. 25, 2021

U.S. Energy Information Administration, Crude oil prices briefly traded below $0 in spring 2020 but have since been mostly flat, Jan. 5, 2021

PolitiFact, No, Biden didn’t give Americans the ‘cheapest’ gas prices on Earth, June 6, 2022

The Street, What Exactly Does OPEC Do That Affects Oil Prices? March 8, 2022

Phone interview with Alan Gin, associate professor of economics at the University of Sand Diego, June 6, 2022

Instagram posts
stated on November 8, 2022 a post:
“Many elections in Bexar are being called with 0% of precincts reporting! I smell MAJOR FRAUD!”

Donald Trump
stated on November 1, 2022 a podcast interview:
At the Pelosi house, “the glass it seems was broken from the inside to the out, so it wasn’t a break-in, it was a breakout.”