Facebook posts
stated on March 1, 2022 in a Facebook post:
“NEW: Biden Admin. instructs Americans to social distance and wear masks in the event of a Nuclear Fallout.”

That development renewed concerns that Russia might turn its nuclear arsenal on the United States. On Feb. 28, President Joe Biden said that Americans shouldn’t be concerned about nuclear warfare, but his reassurances didn’t stop some from looking up the government’s recommendations for surviving a nuclear attack.

Some people turned up something unexpected: a recommendation to wear a mask even in nuclear fallout.

"You can’t make this stuff up…" said one March 1 Facebook post from Lance Wallnau, a podcast host.

His post included an image that read: "NEW: Biden Admin. instructs Americans to social distance and wear masks in the event of a Nuclear Fallout."

The words were followed by a partially truncated website URL and screenshots that explained what to do after a nuclear explosion. 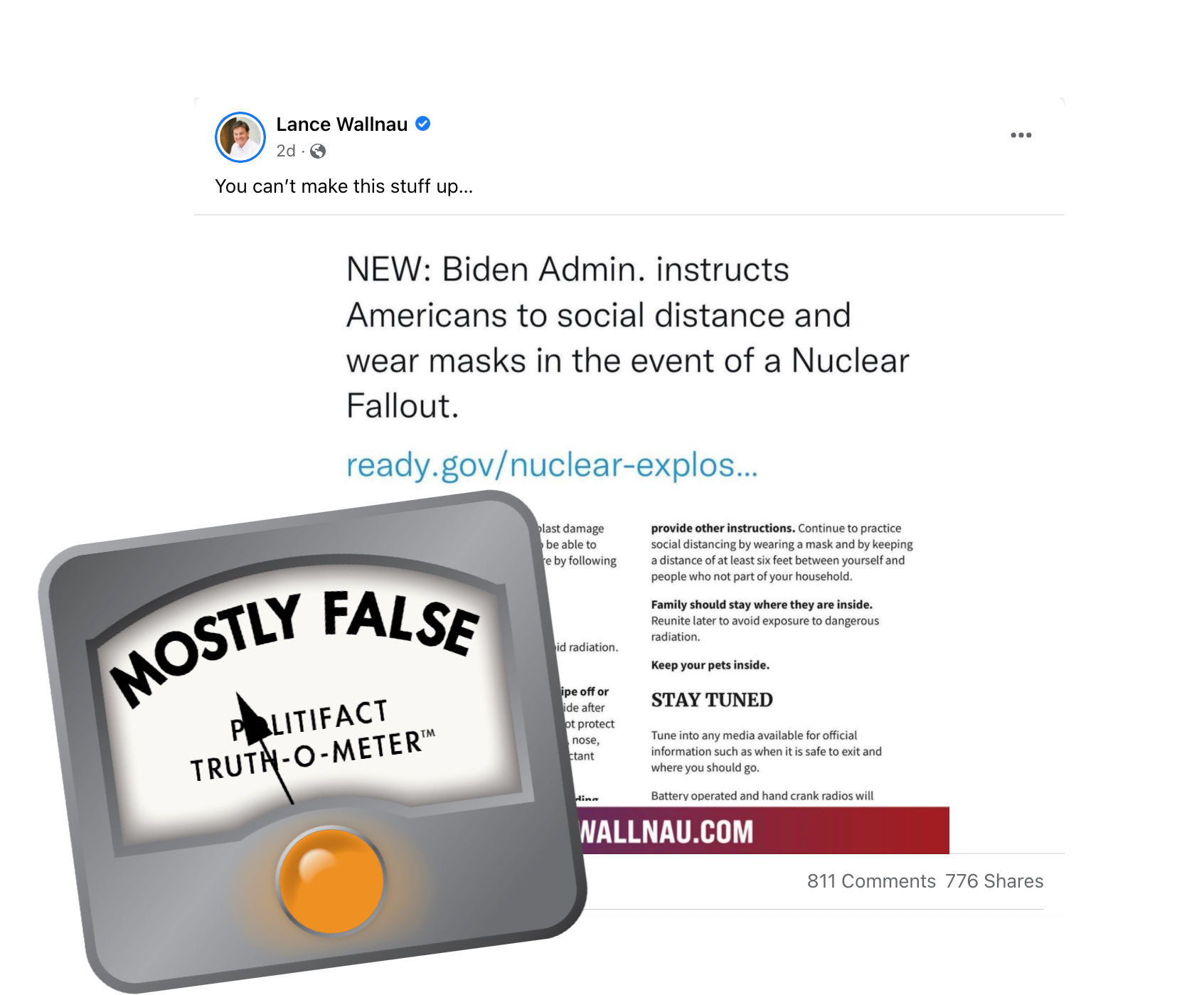 Donald Trump Jr. and politics and sports commentator Clay Travis shared it, too.

"Our government wants us to make sure we socially distance in the event of nuclear war because obviously you’re worried about dying of Covid and not nuclear fallout. These are not serious people they are imbeciles," Trump wrote.

The screenshots of Federal Emergency Management Agency guidelines are real. But they were not updated recently amid Putin’s threats of nuclear war.

FEMA says the changes happened during the Trump administration, in the first year of the COVID-19 pandemic.

Although the website URL in the post was cut short, it appeared to point to ready.gov/nuclear-explosion, a page run by FEMA that provides instructions on ways to minimize radiation exposure following a nuclear explosion.

Ready.gov was designed to educate Americans on preparation and response for various emergencies — both natural and man-made.

And yes, the guidelines on the "Nuclear Explosion" page include recommendations to slow or stop the spread of COVID-19.

The "Get inside" section of the guidelines, for example, instructs people to go to the basement or the middle of a building, avoiding the outer walls or roof. It adds: "Try to maintain a distance of at least six feet between yourself and people who are not part of your household. If possible, wear a mask if you’re sheltering with people who are not a part of your household."

But Jaclyn Rothenberg, a FEMA spokesperson, said the pandemic safety language was added before Russia’s use of force in Ukraine.

"COVID protocols were originally added in 2020," Rothenberg said. She said some pages are now being updated to reflect the CDC’s latest guidelines, which recommend wearing a mask indoors only in counties where the community-level risk of COVID-19 is considered high.

The "Nuclear Explosion" page was last updated on Feb. 25, 2022, to remove a broken link, Rothenberg said.

"No new language was added to or taken off of that particular page," she said.

Links were updated throughout the Ready.gov site.

Using previously archived versions of the site, PolitiFact confirmed that the site’s guidelines have incorporated COVID-19 protocols since at least November 2020, even before Biden’s inauguration. Guidance incorporating COVID-19 safety measures appeared on the site throughout 2021 and remained there as of March 1.

Social media posts said in a "new" update, the Biden administration instructed Americans to "social distance and wear masks in the event of a Nuclear Fallout."

The COVID-19 recommendations that appear on FEMA’s nuclear explosion web page predate the Biden administration. Archived web pages show they have been in place since at least November 2020.

PBS NewsHour, "CDC changes recommendations on when to wear masks in public," Feb. 25, 2022