The post, which was published Nov. 17 by the popular conservative page Trump Rules, includes photos of House Speaker Nancy Pelosi, D-Calif., Rep. Maxine Waters, D-Calif., and Sen. Bernie Sanders, I-Vt. Text written over the images claims the trio has not been very productive during their government careers.

This post was flagged as part of Facebook’s efforts to combat false news and misinformation on its News Feed. (Read more about our partnership with Facebook.) It has been shared thousands of times by several different users and pages.

Like past social media posts, this one is inaccurate. 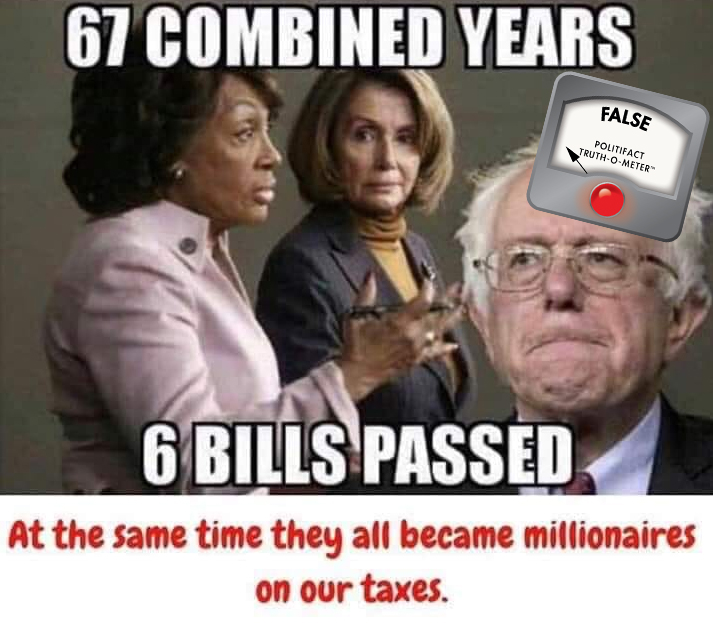 Let’s look at the first claim — that Sanders, Pelosi and Waters have served a combined 67 years in Congress.

When combined, the three lawmakers have served 88 years in Congress — actually more than the Facebook post claims.

For this fact-check, we first used the most stringent definition of the word "passed" — legislation that is "enacted," or signed by the president — to assess the validity of the post. Then we looked at how many sponsored bills had passed at least one chamber of Congress.

Here is each lawmaker’s legislative record as of Nov. 17:

However, experts have told us that counting enacted bills is not the only nor the best way to measure lawmaker productivity.

"Very few bills are ever enacted — most legislators sponsor only a handful that are signed into law," reads a notice on the GovTrack site. "But there are other legislative activities that we don’t track that are also important, including offering amendments, committee work and oversight of the other branches, and constituent services."

Additionally, Pelosi has served as House speaker for seven years, nonconsecutively. That role is more focused on setting the party’s agenda than actually introducing bills, according to GovTrack.