Whoopi Goldberg
stated on January 31, 2022 in a TV segment:
"The Holocaust isn't about race. No, it's not about race."

Whoopi Goldberg speaks during the opening of the "Planet or Plastic?" exhibit on June 4, 2019 at United Nations headquarters. (AP)

Whoopi Goldberg, the co-host of ABC’s "The View," repeatedly and falsely claimed that the Nazi Germans systematic persecution of Jews during the Holocaust was "not about race."

Goldberg’s comments generated widespread backlash, including from Jewish leaders and groups. She has since apologized for the comments, which came during a Jan. 31 segment about a Tennessee school district’s decision to ban "Maus," a graphic novel about the Holocaust.

"If you're going to do this, then let's be truthful about it, because the Holocaust isn't about race. No, it’s not about race," Goldberg said in her initial remarks. Facing pushback from her fellow co-hosts, she argued that it was about "man's inhumanity to man," since "these are two white groups of people."

"Racism was central to Nazi ideology," the U.S. Holocaust Memorial Museum responded in a tweet as Goldberg’s statement garnered attention online. "Jews were not defined by religion, but by race. Nazi racist beliefs fueled genocide and mass murder."

The Auschwitz Memorial, meanwhile, tagged Goldberg in a tweet advertising its seven-chapter online course on the history of the Holocaust, in which the Nazis murdered some 6 million Jews.

Later that night, Goldberg posted an apology on Twitter that quoted from Jonathan Greenblatt, the CEO of the Anti-Defamation League, who had tweeted that the Holocaust "was about the Nazi’s systematic annihilation of the Jewish people — who they deemed to be an inferior race."

The following day, "The View" brought Greenblatt on the show, and Goldberg apologized again.

"I said that the Holocaust wasn’t about race and was instead about man’s inhumanity to man, but it is indeed about race, because Hitler and the Nazis considered Jews to be an inferior race," Goldberg said. "I regret my comments, as I said, and I stand corrected."

A spokesperson for ABC did not respond to a request for comment.

Historians said Goldberg’s original claim distorted the history of the Holocaust, which was fueled by the Nazis’ racist ideology and policies.

"As far as the Nazis were concerned, non-Jewish Germans were an entirely different race, in a very physical sense, from Jews, no matter how long a particular Jewish person or family might have lived in Germany," said Benjamin Hett, a historian at Hunter College and the Graduate Center of the City University of New York. "Goldberg is without doubt entirely wrong."

Racism toward Jews and other groups drove the Nazis’ ideology, policies, and mass murder of Jews in concentration camps and elsewhere, according to the U.S. Holocaust Memorial Museum.

"Nazi antisemitism rested completely on the argument that they are not people like you Germans," said Peter Hayes, a professor emeritus of history and German at Northwestern University. "They are implacably and by inheritance different and hostile, and therefore they have to be ‘removed,’ one way or another."

Nazi theories of race held that Germans and other people of Indo-European descent belonged to a superior group called the "Aryan" race. The Nazi heirarchy of races positioned the Aryans at the top, Black people at the bottom and everyone else on a scale in between, Hayes said.

Jewish people were branded as the most dangerous threat to the Aryan race, Hayes said. They were considered conniving, hate-filled, parasitic, and capable of mobilizing the other races.

Nazi leader Adolf Hitler, in particular, saw Jewish people as "subhuman" entities who threatened all other races by spreading subversive ideas like liberalism and Marxism, and by mixing with other races through marriage and sexual relations, said Christopher Browning, a professor emeritus of history at the University of North Carolina at Chapel Hill.

"For Hitler, all history was a race struggle," Browning said.

Hitler described Jews as a race — not a religion — in "Mein Kampf," the autobiographical political manifesto that charted his ideology and his vision for the future of Germany. One key chapter comparing the races was titled "Nation and Race."

"Hitler was very explicit about this, and always said very clearly that being Jewish had nothing to do with religious affiliation or cultural background, but was entirely physical," Hett said.

The Nazis went to great lengths to try to prove through pseudoscience that Jewish people had such physical markers, even devoting an office of the government to such work, Hett said.

They also implemented the Nuremberg Race Laws, which provided the legal framework for the systematic persecution of Jews, according to the U.S. Holocaust Memorial Museum.

The first of the two laws codified a definition for Jewishness based on race and heritage that stripped them of German citizenship. The second prohibited marriage and criminalized sexual relations between Jews and non-Jewish Germans.

In one of several pages about Nazi racism on its website, the U.S. Holocaust Memorial Museum writes: "Hitler's program of war and genocide stemmed from what he saw as an equation: ‘Aryan’ Germans would have to expand and dominate, a process requiring the elimination of all racial threats — especially the Jews — or else they would face extinction themselves." 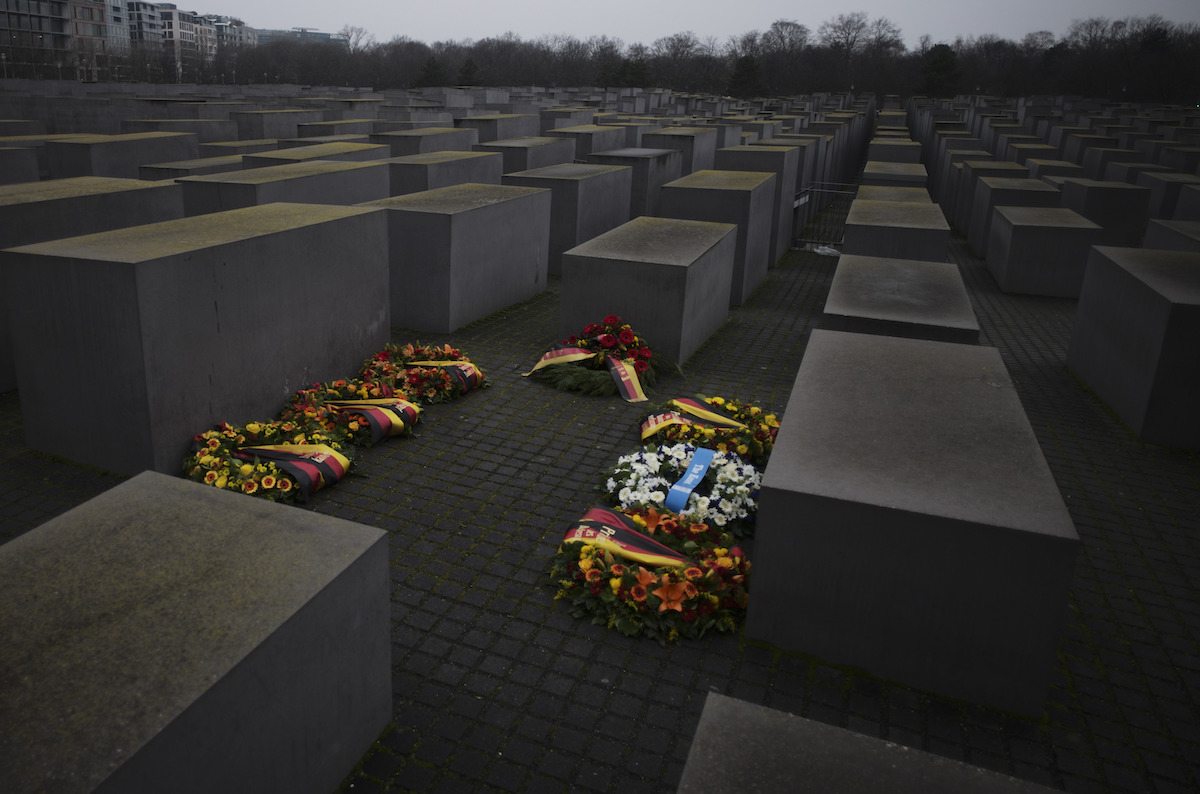 Wreaths placed at the Memorial to the Murdered Jews of Europe on the International Holocaust Remembrance Day in Berlin, Germany, on Jan. 27, 2022. (AP)

Even Jews who converted to Christianity were rounded up during the Holocaust because of their parents or grandparents, rather than their religious practice.

The Nazi Germans’ persecution of millions of Jews was premised on a racist ideology that viewed Jews as an inferior race and the biggest threat to the so-called Aryan race and other races, and laws that set about defining Jews not by their religion, but by their heritage.

Hitler himself expressed the belief that the Jews were a lesser race, historians said. Goldberg conceded her error and apologized.

The statement is not accurate and makes a ridiculous claim. That’s our definition for Pants on Fire.

RELATED: Why Holocaust comparisons by anti-vaccine activists like RFK Jr. are grossly inaccurate

Email interview with Benjamin Hett, professor of history at Hunter College and the Graduate Center of the City University of New York, Feb. 1, 2022