Disease. HIV is a virus that attacks and destroys white blood cells in the blood. These cells are part of the immune system and normally defend the human body against disease and infection. AIDS is the late stage of infection when other microbes take full advantage of the weakened immune system and cause severe opportunistic infections.

Impact. In 2015 an estimated 36.9 million people around the world lived with HIV. There were around 2.1 million new cases of HIV in 2015 and around 1.1 million people died from AIDS-related illnesses the same year. HIV has killed almost 25.3 million people since 2000. The most vulnerable groups are gay and bisexual men, drug users, sex workers, prisoners, and transgender people.

Symptoms. Initial infection results in a flu-like illness with symptoms such as fever, a rash, headache, and sore throat. This stage generally lasts a few weeks. People then enter a second stage that can last several years where they often show no signs of illness. If left untreated, infected individuals will develop AIDS. This last stage is characterized by a high risk of developing fungal, bacterial, and viral infections such as tuberculosis as well as cancers such as Kaposi’s sarcoma.

How it Spreads. HIV primarily spreads through bodily fluids. The majority of transmission cases occur during unprotected sex. The virus also resides in the blood and spreads through contact with infected blood such as sharing infected needles or during blood transfusions. HIV can also spread from mother to child during pregnancy, delivery, or breastfeeding.

Where in the World? HIV/AIDS is a global disease that exists in every major region of the world. However, the majority of new infections and deaths occur in middle and low-income countries, particularly in sub-saharan Africa. In 2014 25.8 million people in that region were living with HIV, and it accounts for almost 70% of all new HIV infections. 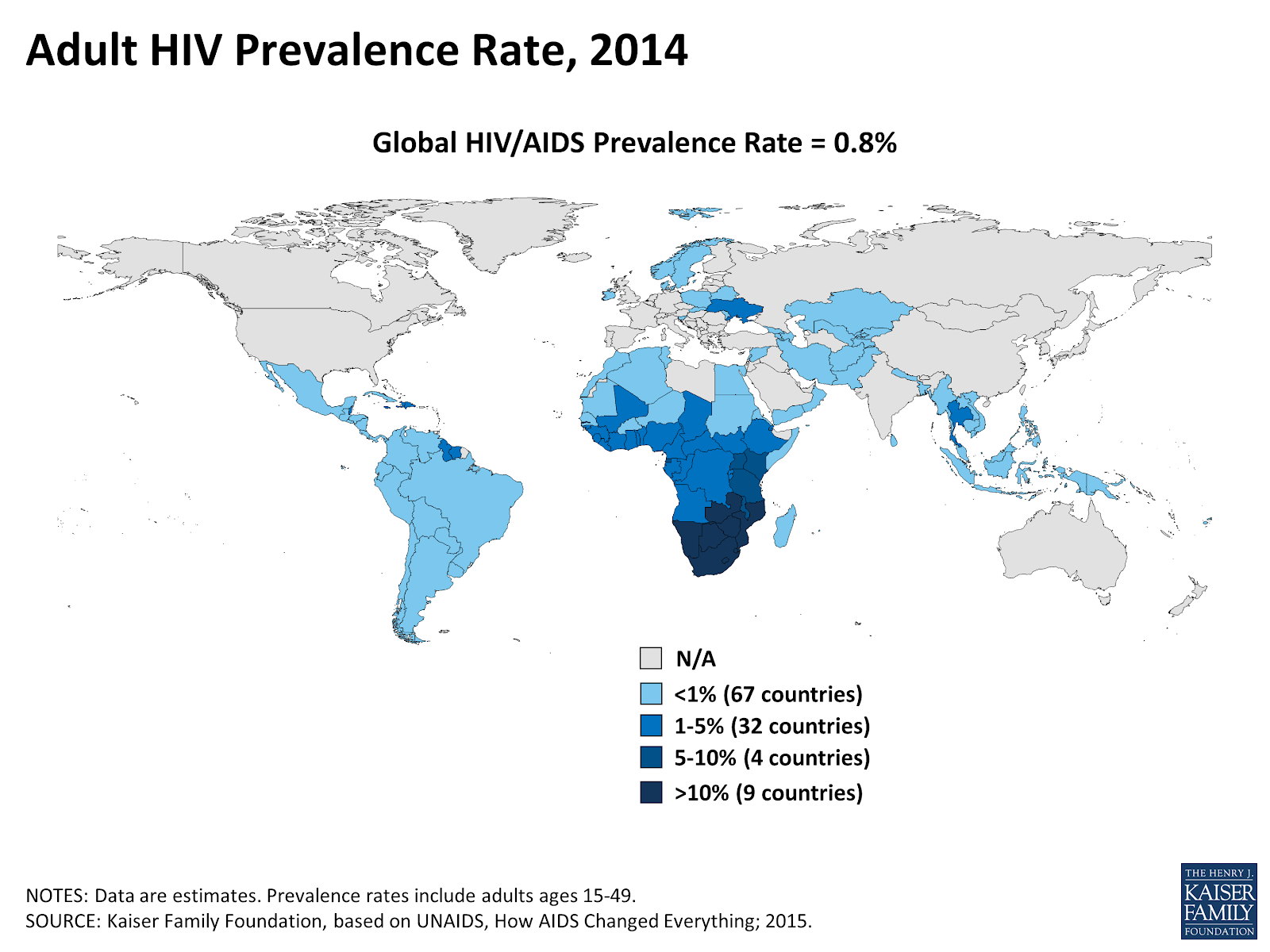 Treatment and Prevention. There is no cure for HIV. However, most cases can be treated through antiretroviral therapy (ART), which consists of taking a regimen of several drugs that control replication of the virus and prevent the onset of AIDS. The therapy must be started as soon as possible after diagnosis to maximize the chance of success.

Prevention efforts mostly focus on limiting exposure to risk factors through safe sex practices and eliminating needle-sharing among drug users. Testing and counselling allows people to learn about their infection status and avoid spreading the disease to others. In the past decade drugs have also become viable tools for prevention. ART can be taken by an HIV-negative sexual partner to prevent infection. ART can also be administered to someone exposed to HIV in the past 72 hours to completely prevent infection.

In the U.S. There are an estimated 1.2 million people living with HIV in the U.S. The number of infected people has steadily risen since 2006, but the rate of new infections has stabilized at around 50,000 per year. AIDS was responsible for around 13,712 deaths in 2012. 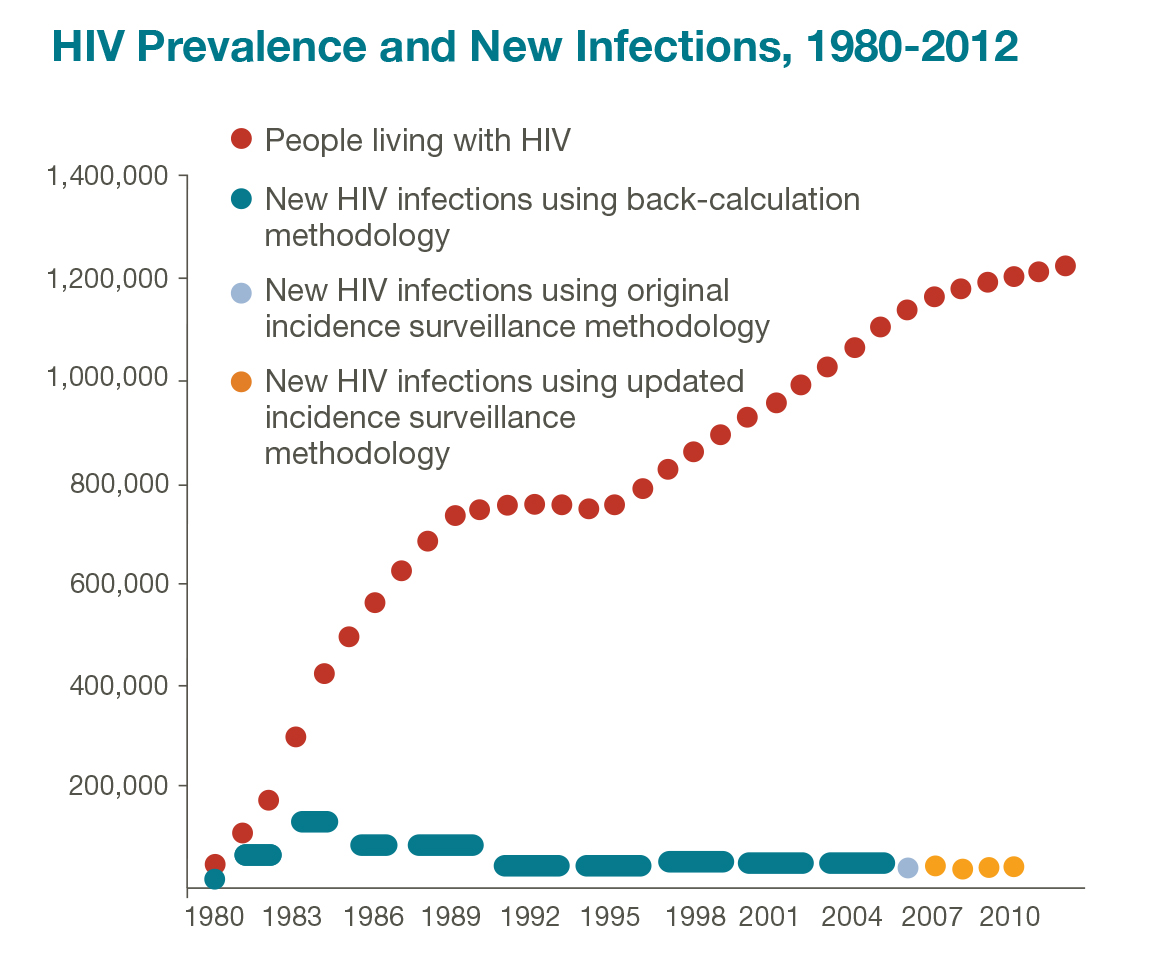 Travelling? Because HIV isn’t transmitted through everyday contact, the risk of acquiring it while travelling in high-risk regions is low. Travelers should follow proper prevention procedures such as practicing safe sex with a new partner, avoiding sharing of needles and syringes, and avoiding injections and transfusions except in an emergency. People who think they have been exposed should return to their country and seek medical treatment and preventative measures.

Elimination. AIDS was first declared as a health emergency in 1981. Health agencies first focused on minimizing risky behavior through educational efforts. Since the mid 2000’s focus has shifted to promoting universal access to HIV testing and treatment with drugs in vulnerable regions and populations. According to the WHO, new HIV infections fell 35% between 2000 and 2015, and AIDS-related deaths fell by 24% in the same period.

U.S. Government Funding. Funding for domestic and international HIV/AIDS care, prevention, and research has increased from $28.3 billion in FY 2011 to $33 billion in FY 2016. President Obama’s request for funding in FY 2017 is $34 billion, a 3% increase over the previous year.

Center for Disease Control and Prevention, HIV, accessed on June 24, 2016

Al Gore
stated on October 11, 2016 a speech:
Global warming leads to much quicker spread of the Zika virus because the increased temperature, "makes mosquitoes mature faster,  . . . bite more due to having a higher metabolism, and makes the Zika virus inside of them incubate faster."

Barack Obama
stated on September 20, 2016 a speech to the Leader's Summit on Refugees:
"Refugees are subject to more rigorous screening than the average tourist in the U.S."

Justin Trudeau
stated on August 25, 2016 a letter:
Young women, "account for a shocking 74% of all new HIV infections among adolescents in Africa."

Rick Scott
stated on August 3, 2016 an interview:
Says Hillary Clinton is "okay with outsourcing to India and other places."

Gary Johnson
stated on August 3, 2016 a town hall meeting:
Legal prescription drugs "statistically kill 100,000 people a year, (but) there are no documented deaths due to marijuana."

Bill Mitchell
stated on April 20, 2016 a speech:
"Over the last six years, the state of Illinois spent about $320 million on illegal immigrants."

Donald Trump
stated on June 21, 2016 an email:
"As Secretary of State, Hillary Clinton laundered money to Bill Clinton through Laureate Education, while Bill Clinton was an honorary chairman of the group."