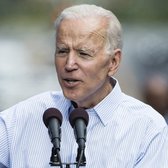 Joe Biden is the president of the United States. A Democrat, Biden served as a Delaware senator from 1973 (elected at the age of 29) until 2009. During his time in the Senate, he served as chair of the Foreign Relations Committee, chair of the International Narcotics Control Caucus and chair of the Judiciary Committee. He subsequently served as Barack Obama’s vice president from 2009 to 2016. Biden launched unsuccessful presidential campaigns in 1988 and 2008. He received a degree in history and political science from the University of Delaware and his J.D. from Syracuse School of Law.