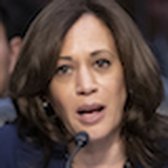 Kamala Harris is the vice president of the United States. Harris was elected as a senator from California in 2016. She previously was California’s attorney general from 2011 to 2017. From 2004 until 2011, she was the district attorney of San Francisco. Harris received a bachelor’s degree in political science and economics from Howard University and a J.D. from the University of California, Hastings College of Law. In 2019, she ran for the Democratic nomination for president and dropped out in December. On Aug. 11, 2020, former Vice President Joe Biden named Harris as his running mate.