How the U.S. funds disaster recovery
By John Kruzel September 14, 2017

As vast swaths of the country reel from the one-two punch of Hurricanes Harvey and Irma, the focus now is on efforts to help affected states and communities recover from the devastation.

As this arduous task opens on several new fronts, we decided to take a closer look at how money flows into and out of federal disaster relief coffers. 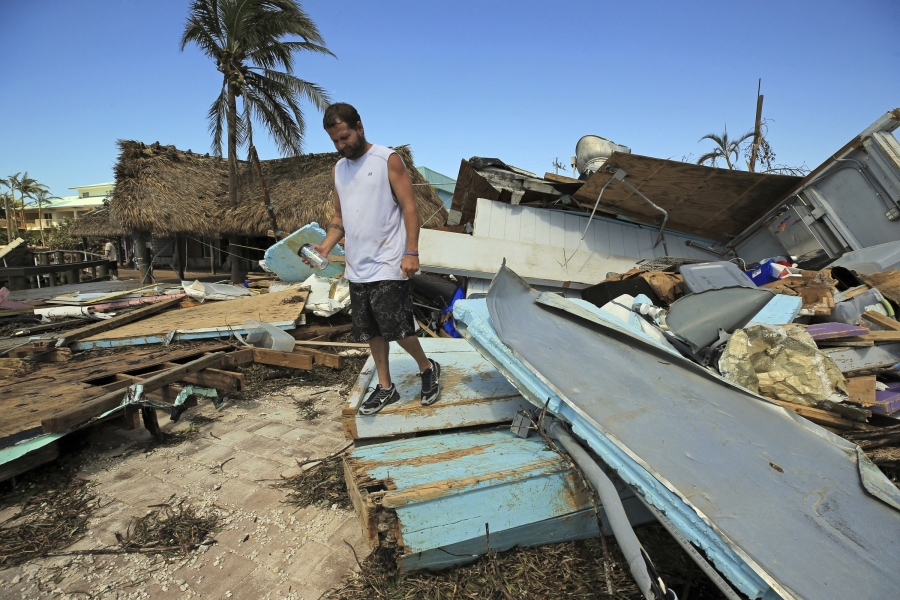 Eric Ward, the bartender at Key Largo's Snappers inspects the damage from Hurricane Irma at the popular restaurant Tuesday, Sept. 12, 2017, in Key Largo, Fla. Florida is cleaning up and embarking on rebuilding from Hurricane Irma, one of the most destructive hurricanes in its history. (Al Diaz/Miami Herald via AP)
What triggers federal disaster relief?

Multiple agencies play a part in the nation’s disaster recovery. But with FEMA’s role in the Hurricane Katrina response still fresh in public memory, the funding source Americans are most familiar with is likely FEMA’s disaster relief fund.

A sequence of steps, defined by law, typically takes place before the federal government turns on FEMA’s disaster relief spigot.

If local officials believe the scale of a disaster is beyond their capacity, a governor can ask the president for help. FEMA then makes a recommendation to the president, who chooses whether to officially declare a major disaster or emergency. Both declaration types trigger federal disaster assistance, but the aid varies in amount and scope

A wide spectrum of events, from highly destructive incidents to more routine occurrences, can qualify for federal aid, and the president can declare a disaster even before its full brunt has been borne. A Congressional Research Service flowchart depicts the typical chain of events that triggers federal relief for a major disaster. (Note that some disaster relief activities don’t require a presidential declaration.) 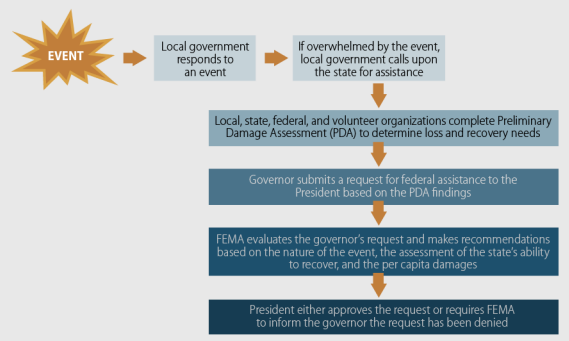 Trump’s disaster and emergency declarations for Harvey and Irma

President Donald Trump’s Twitter feed showed this process play out in real time as Hurricane Harvey barreled toward the Gulf Coast on Aug. 25.

Trump tweeted around noon Eastern time that he had been in touch with Govs. Greg Abbott of Texas and John Bel Edwards of Louisiana, and that the federal government was keeping a close eye on developments.

"I have spoken w/ @GovAbbott of Texas and @LouisianaGov Edwards. Closely monitoring #HurricaneHarvey developments & here to assist as needed," Trump tweeted at 11:46 a.m.

I have spoken w/ @GovAbbott of Texas and @LouisianaGov Edwards. Closely monitoring #HurricaneHarvey developments & here to assist as needed.

A short period later, Trump tweeted that he had been briefed on Hurricane Harvey by FEMA Administrator Brock Long and other advisers that morning.

At 7 p.m. that evening, the National Hurricane Center upgraded Harvey to a Category 4 hurricane, with maximum sustained winds of 130 mph, and "sustained hurricane-force winds spreading onto the middle Texas coast." Landfall looked imminent.

Before Harvey touched down outside Corpus Christi, Trump announced over Twitter that he had signed a disaster proclamation at Abbott’s request.

"At the request of the Governor of Texas, I have signed the Disaster Proclamation, which unleashes the full force of government help!" Trump tweeted at 9:46 p.m.

At the request of the Governor of Texas, I have signed the Disaster Proclamation, which unleashes the full force of government help!

Technically speaking, Trump declared a major disaster in Texas, and declared an emergency three days later in Louisiana, also due to Harvey.

In September, Trump made major disaster and emergency declarations in response to Hurricane Irma. 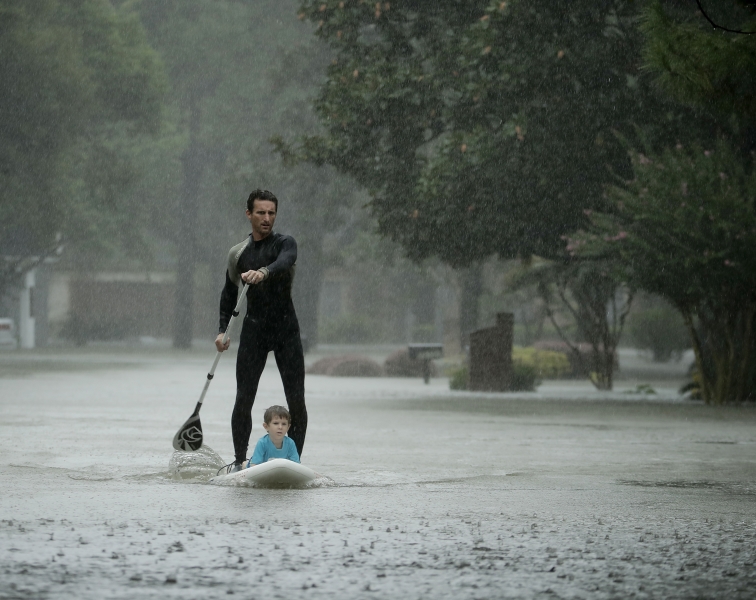 Once the president declares a major disaster, FEMA disburses funds to the state for eligible projects under the following categories, according to the Congressional Research Service:

Where does FEMA get its money?

The first pot, known as base funding, is the smaller of the two. It’s based on a formula pegged to ordinary FEMA operations and more routine events. In fiscal 2017, base funding was $615 million.

The second pot of money Congress gives FEMA is much bigger. Called Major Declarations, it’s based on how much was spent on disaster relief in the past decade. In fiscal 2017, that appropriation was $6.7 billion.

Together, base and major declaration funding totaled $7.3 billion in fiscal 2017. (FEMA can also carry over any unspent funds from the previous year.)

That may sound like a lot of money. But compared with an estimate by Moody’s Analytics, which places the combined damage from hurricanes Harvey and Irma at $150 billion to $200 billion, it’s a drop in the bucket.

So what happens when disaster recovery outstrips FEMA funding?

The task then falls to Congress to release more money, in the form of supplemental appropriations.

Lawmakers did just that on Sept. 8 when they approved more than $15 billion for additional Harvey relief. That includes the following:

In a Sept. 11 press briefing, White House homeland security adviser Tom Bossert said a second appropriation would come at the end of September, and that federal officials would later seek a third and "perhaps a fourth" appropriation.

If history is any guide, Bossert has reason to be confident Congress will approve more funding, given its solid track record of replenishing FEMA’s depleted disaster relief fund.

According to the Congressional Research Service, Congress made 14 supplemental appropriations from 2004 and 2013, totaling $89.6 billion. That includes $43 billion in 2005 alone, the year Hurricanes Katrina, Wilma and Rita hit the United States. 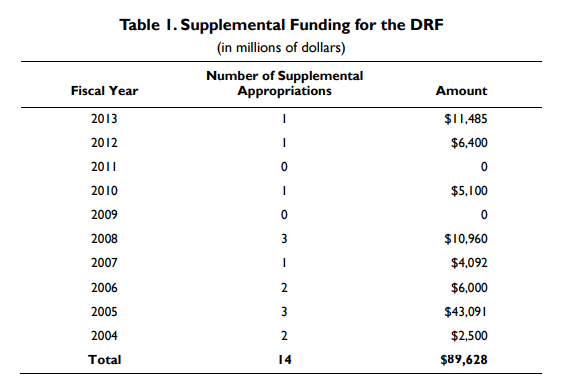 New York Times, "From Forecast to Disaster: A Timeline at the National Hurricane Center," Aug. 30, 2017

Interview with Robert B. Olshansky, urban and regional planning professor at the University of Illinois (Urbana-Champaign), Sept. 13, 2017