The Democratic debate resurrected controversy over busing. But is it an issue today?
By Louis Jacobson July 3, 2019
By Amy Sherman July 3, 2019

Their interaction got a lot of attention, as Biden tried to deny his record on busing. (We rated his claim Mostly False.) But it didn’t shed light on busing as a policy issue. Viewers were left with unanswered questions: Is busing still used today? If not, why did it stop? Did busing meet its goals? And what policies have been adopted in its place?

Amid unfavorable court decisions and public controversy, busing has waned since the 1990s, though it still exists in a few places.

Instead, the conversation about diversifying the nation’s schools has largely turned toward other policies, including charter schools, magnet programs, and redrawing attendance boundaries.

"The segregation debate is still somewhat alive, but the old busing debate is largely dead," said Douglas Harris, a Tulane University professor and expert in the economics of education. Given both court decisions "and how unpopular busing has always been, among blacks and whites alike, the old notion of forced involuntary busing is essentially a thing of the past."

Ahead of the Democratic debate on July 30 and 31 — to be held in Detroit, which has a history of high levels of school segregation — we interviewed nearly a dozen experts on education policy to understand how school busing is, or isn’t, having an impact today.

The early history of busing

The landmark Supreme Court decision Brown vs. Board of Education in 1954 declared segregation "inherently unequal" and unconstitutional. Some school districts, primarily in northern cities, chose to begin busing students to pursue integration.

Busing programs between the 1950s and 1970s typically bused black and Latino students from areas with mostly minority schools and placed them in schools that historically had white majorities. (In the debate, Harris noted that she herself was bused in Berkeley in the 1960s.)

The Supreme Court put its stamp on busing in the 1971 decision of Swann vs. Charlotte-Mecklenburg Board of Education, said Kevin Brown, an Indiana University law school professor. The court said that school districts needed to achieve the maximum degree of school desegregation reasonably possible.

After this decision, busing expanded across the country in the 1970s. However, the practice encountered significant resistance in cities like New York, Boston and Detroit, sometimes inspiring violence.

During these years, Biden was a "leading anti-busing crusader," said University of New Hampshire historian Jason Sokol. Biden repeatedly said then that he supported the goal of desegregation, but not through busing. Judges were ordering busing by that time because few districts were voluntarily implementing it, Sokol told us.

The decline of busing

Amid such controversy — including questions among some educators and civil rights activists — busing efforts declined by the 1990s.

"Prejudice was a big motive for white flight, but so also was white parents’ belief that the newly desegregated schools were not prepared to manage the diversity of student needs and levels of preparation they then faced," said Paul T. Hill, a University of Washington education professor. "Middle class parents of all ethnicities will flee a school or district that they do not trust, or that think their kids are just being assigned to schools just to achieve the ‘right’ numbers."

The Biden campaign has pointed to comments by many African-American leaders and mayors who publicly called for an end to busing by the 1990s, including officials in St. Louis, Denver, Seattle and Cleveland.

The courts even began to frown on busing enacted voluntarily by local governments. In 2007, the Supreme Court limited the ways in which districts can choose to promote diversity and reduce racial isolation in the case Parents Involved in Community Schools vs. Seattle School District #1.

As a result, busing has "shrunk dramatically over the past 10 years," said Kevin Brown, an Indiana University law school professor. Today, about 200 school districts remain under court desegregation orders, but busing in the traditional sense — primarily for desegregation purposes — is relatively rare.

Busing "is still an issue in some larger districts that have implemented economic integration plans," such as Wake County, N.C., and Louisville, Ky., said David J. Armor, an emeritus public policy at George Mason University’s Schar School of Policy and Government. Opponents have filed a lawsuit against desegregation efforts in Minneapolis-St. Paul, he said.

To the extent that it is used today, busing is used to accomplish a mix of goals, such as providing students options for magnet schools or other schools of choice. But other education policies have taken a higher profile.

The switch essentially exchanged the "forced" decision of busing for one in which families could take a more participatory role. This helped make them more politically palatable.

Some districts instituted "controlled choice" programs in which families ranked their choices of schools within their district.

Another option has been "diverse by design" charter schools that build integration into their missions, Lake said. 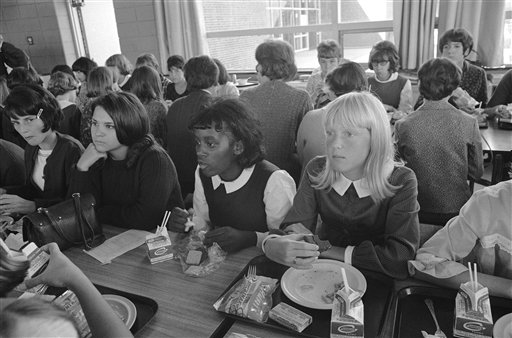 For all its controversy, busing achieved its major goals while it was being implemented, scholars say.

When looking at desegregation and academic performance, busing was "very successful through the 1960s and 1970s, and even into the 1980s," Harris, the Tulane professor, told PolitiFact. He pointed to research commissioned in 1984 by the National Institute of Education that suggested that African American students had higher test scores as a result of desegregation.

Rucker C. Johnson, a University of California-Berkeley professor and co-author of "Children of the Dream: Why School Integration Works", has concluded that during the heyday of busing, "we witnessed the greatest racial convergence of achievement gaps, educational attainment, earnings and health status." And these gains were not at the expense of whites, he said.

Studies show that black and white children benefit from being in diverse schools, though Hill added some points of caution: Some of  these findings are based on schools that are naturally desegregated due to neighborhood composition and might not apply to situations in which desegregation is forced.

In any case, the academic progress traceable to busing largely stalled starting in the 1990s, Harris said.

In theory, tackling housing segregation would have been a long-term solution to school segregation. "But this did not occur," Harris said.

CLARIFICATION, July 4, 2019: The story has been updated to clarify the name of the school district in San Antonio.

The Century Foundation," The Benefits of Socioeconomically and Racially Integrated Schools and Classrooms," April 29, 2019

Detroit News, "Despite gains, Mich. schools among most segregated," Dec. 4, 2017

Michigan Radio, A moment in history that sealed the Detroit schools' fate, Sept. 13, 2016

Supreme Court of the United States, Brown vs. Board of Education, 1954

Supreme Court of the United States, Green vs. County School Board of Kent, 1968

Supreme Court of the United States, Milliken vs. Bradley, 1977

Supreme Court of the United States, Board of Education v. Dowell, 1991

Supreme Court of the United States, Freeman vs. Pitts, 1991

Supreme Court of the United States, Missouri vs. Jenkins, 1995

PolitiFact, "American schools are 'more segregated than they were in the 1960s,' says Hillary Clinton," June 25, 2015

Email interview with David Bills, professor of education at the University of Iowa, July 1, 2019

Email interview with Leland Brett Ware, professor in Africana studies at the University of Delaware, July 1, 2019

Email interview with Paul T. Hill, founder of the Center on Reinventing Public Education and Research Professor at the University of Washington-Bothell, July 1, 2019

Email interview with Robin Lake, director of the Center on Reinventing Public Education at the University of Washington-Bothell, July 1, 2019

Email interview with Douglas N. Harris, director of the National Center for Research on Education Access and Choice at Tulane University, July 1, 2019