The showdown between the moderate and progressive wings of the Democratic Party — and frontrunners Joe Biden, Bernie Sanders and Elizabeth Warren — never really reached a boil, as the Democratic candidates for president trained their harshest jabs for President Donald Trump.

But policy differences at the third Democratic presidential debate did become more clear, particularly on the issue of health care.

PolitiFact analyzed several statements made by the candidates on the debate stage at Houston’s Texas Southern University. 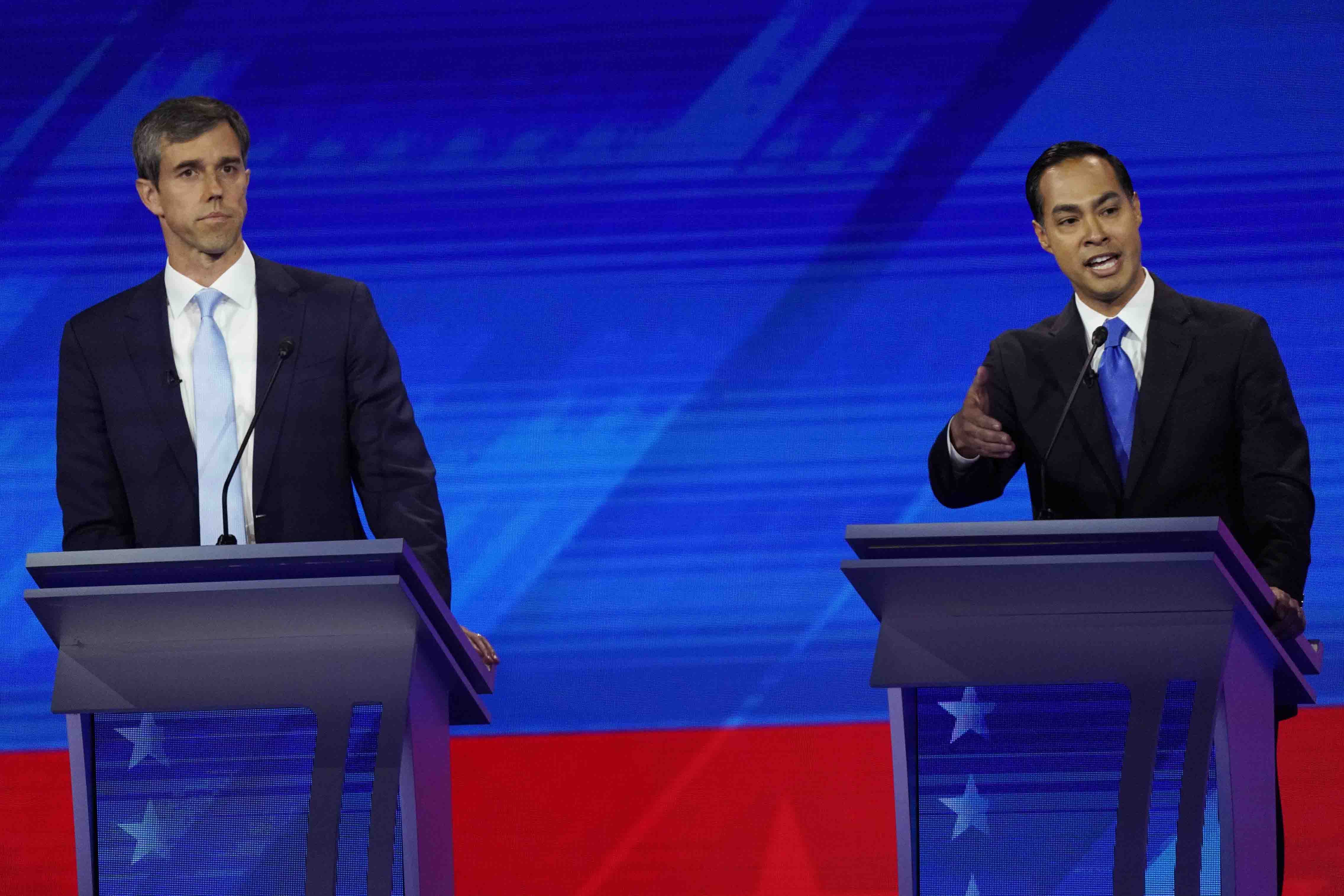 Beto O'Rourke and Julián Castro on Sept. 12, 2019, during a Democratic presidential primary debate in Houston. (AP)

This was one of the most explosive moments of the night. And it’s Mostly False.

Castro accused Biden of changing his position in short order about the contours of his health care plan — drawing criticism from some commentators for suggesting that Biden, at 76, is having memory problems.

Castro’s criticism falls into two categories: that Biden’s plan requires people who want the public option to "opt in" and that the former vice president contradicted himself on the debate stage.

On the first charge, Castro exaggerated the differences between his and Biden’s health care plans.

Castro’s plan is an opt-out plan while Biden’s is an opt-in plan, but the differences between those are much less than Castro suggests. Biden’s plan would guarantee Americans who are in need access to Medicare coverage, just like Castro’s would. The differences would likely amount to the nature or timing of paperwork, rather than being significant barriers to access.

Then, Castro used this questionable distinction to claim that Biden had said opposing things within two minutes. But that’s an exaggeration at best.

Castro claimed Biden initially said people would have to opt in to Medicare and then later changed his tune and said they wouldn’t have to opt in. Biden did say at several points before Castro challenged him that enrollment would be automatic — essentially a formality.

This fact-check goes deep into the details. 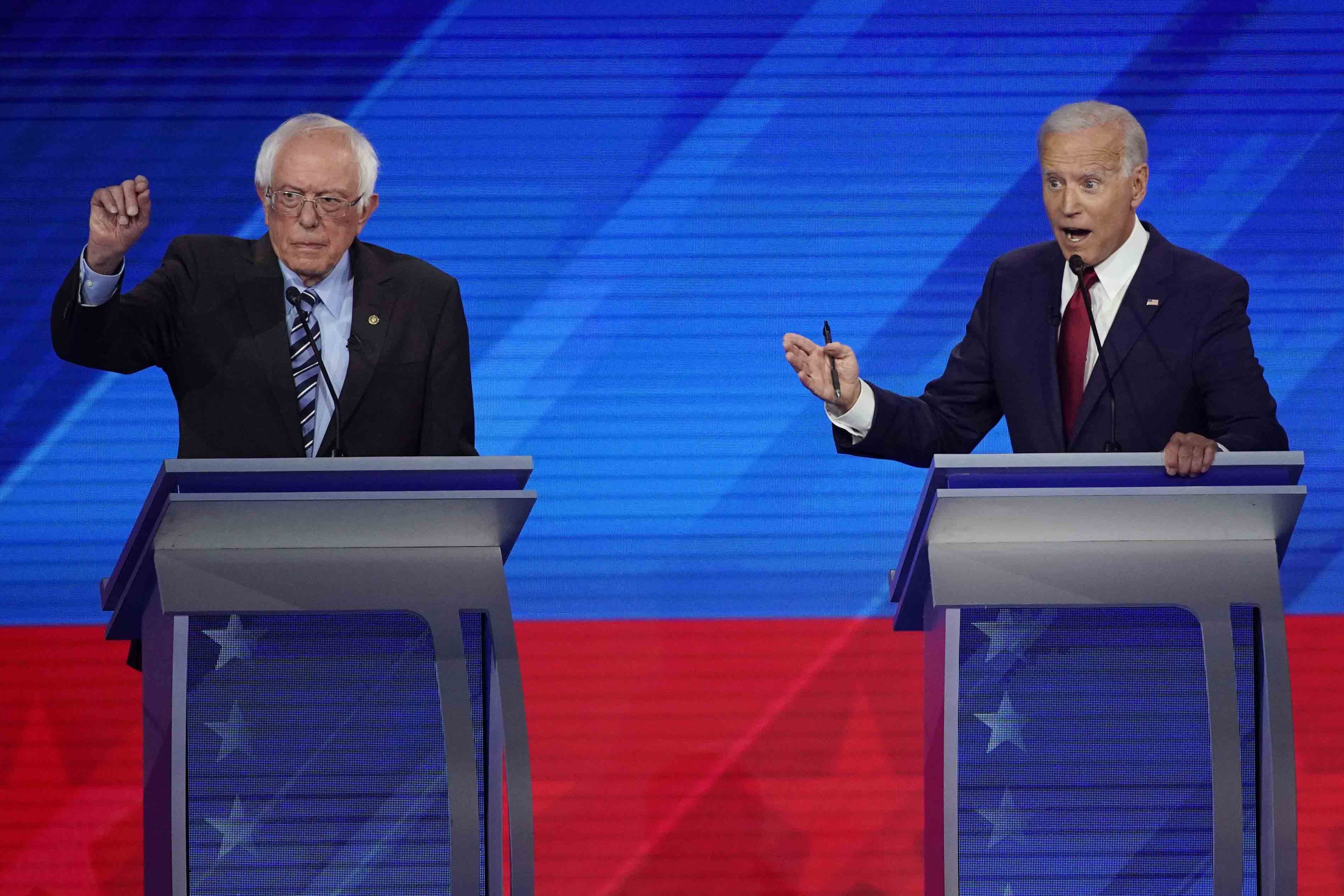 Bernie Sanders and Joe Biden on Sept. 12, 2019, during a Democratic presidential primary debate in Houston. (AP)

Sanders on the cost of American health care

"Let us be clear, Joe, in the United States of America, we are spending twice as much per capita on health care as the Canadians or any other major country on Earth."

This is partially accurate: Sanders is right about Canada, but not about every other major country.

The United States led the world in health care spending in 2018, at $10,586 spent per capita, according to data from the Organization for Economic Cooperation and Development.

The next two countries with the highest health care spending were Switzerland and Norway, with $7,317 and $6,187, respectively. The United States spends more per-capita than those countries, but not twice as much.

Sanders inflates the number of uninsured due to job change

We rated this Mostly False. Sanders has a point that coverage continuity is a big problem in a country where roughly 150 million get their insurance from their jobs. But his claim inflates the scope of the problem.

As evidence, the Sanders campaign sent us an analysis by the People’s Policy Project, a social democratic-leaning think-tank. That analysis hinges on a question asked as part of a national Centers for Disease Control and Prevention survey in 2014, plus a little basic multiplication. It found that "just under 50 million people" were uninsured for at least part of the year.

RELATED: The latest on US health insurance coverage, income and poverty

He took a broad finding about the number of people who had experienced an insurance gap for any reason roughly five years ago and misleadingly used it to describe a much narrower segment of the current population who lost insurance because of employment changes. 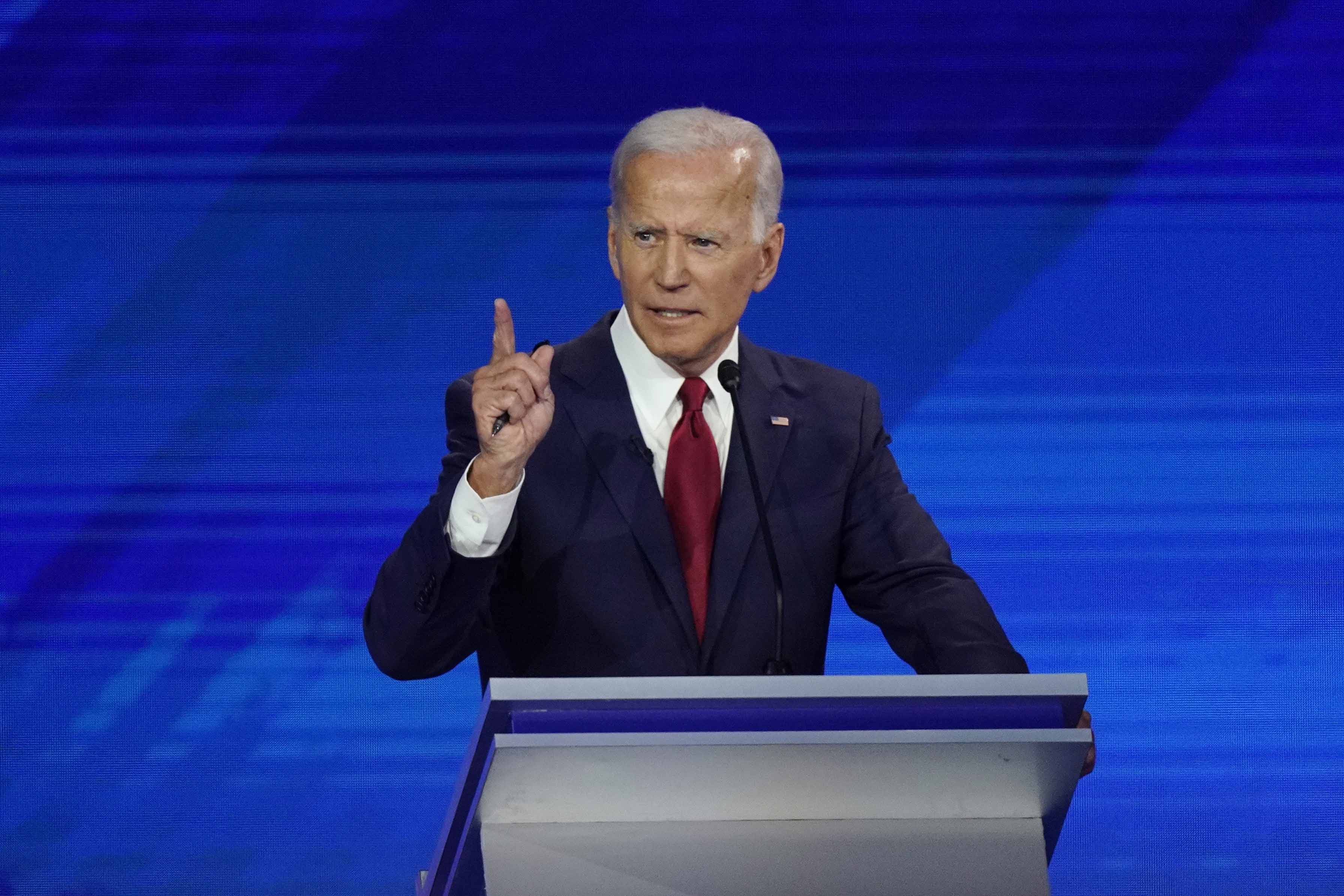 "Over 90% of the American people think we have to get assault weapons off the street  — period."

This is Mostly False. Biden was responding to a moderator’s question about his failure to get an expanded background check bill passed after the Sandy Hook school mass shooting in 2012.

The recent polls we found showed that a majority of Americans support banning assault weapons, but by a much smaller margin than Biden cited.

Overall, five polls taken after the shootings in El Paso, Texas, and Dayton, Ohio, showed between 56% and 70% of people back a ban on assault rifles. Polls showed higher support among Democrats. We asked the Biden campaign for his evidence and did not hear back immediately. We wondered whether Biden was referring to the percentage of Americans who support expanding background checks, which was in the ballpark of 90% in many polls.

This is False. Reporting from the time described the Obama administration using an enclosure to hold migrant children with the word "cages."

That term has continuously been used by Democrats in attacks against Trump and the detention of immigrants arriving at the border. The Trump administration says that the facilities it uses are not cages.

The description has been used to refer to chain-link enclosures holding immigrants at border processing facilities during both the Obama and Trump administrations.

Reporting from the Los Angeles Times in 2014 referred to enclosures keeping immigrant children as "makeshift cages." That same year, the Arizona Republic also referred to a chain-link enclosure holding children as "cages." A former Homeland Security secretary under the Obama administration in interviews has acknowledged that some have described as "cages" the enclosures used during Obama’s tenure.

There’s a debate on whether a chain-link enclosure is a "cage" and whether applying that term to those structures is subjective. And, to be sure, the policies of the Obama and Trump administrations are not the same. But the term "cages" certainly was used in 2014 to describe enclosures used by Obama’ administration. 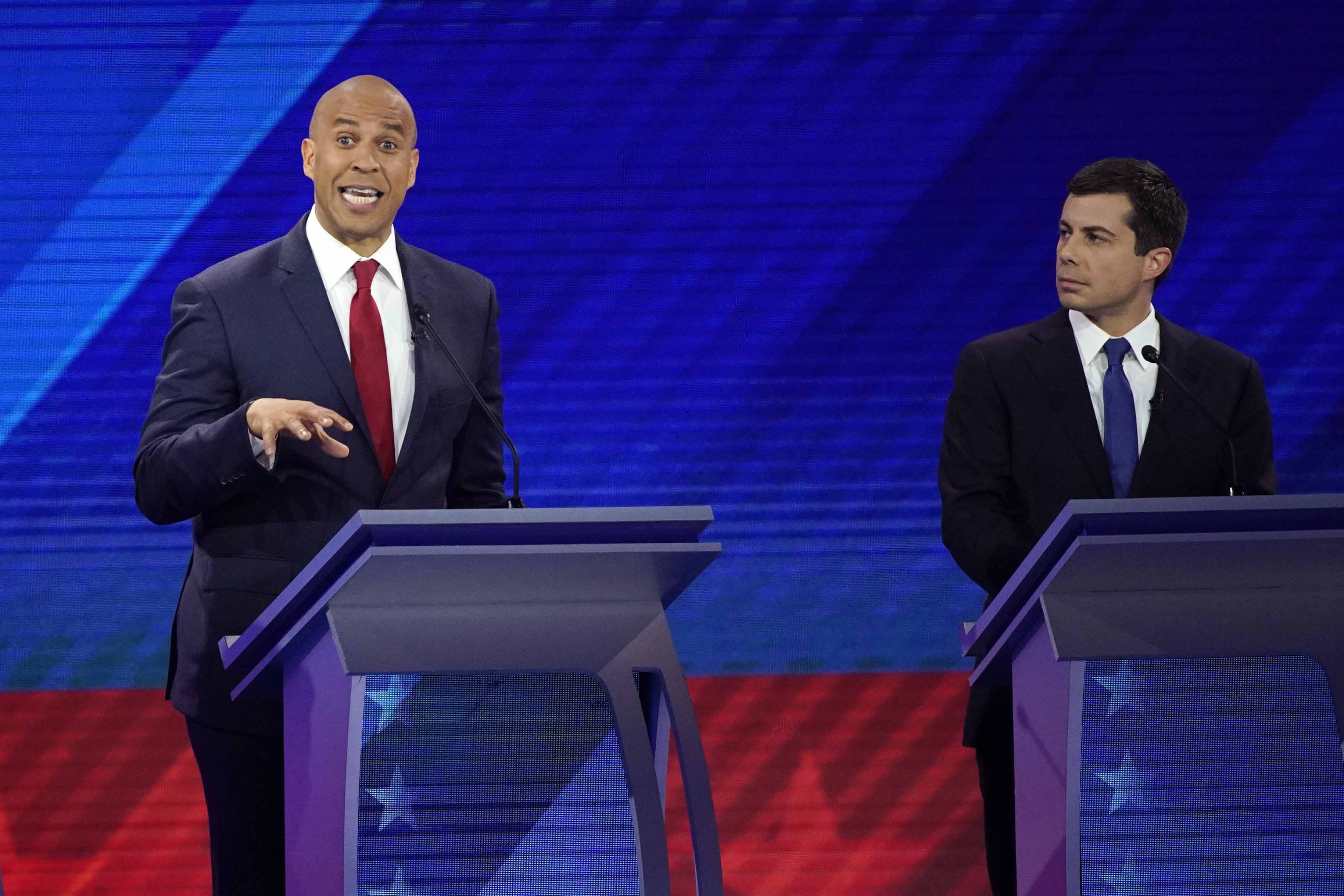 Pete Buttigieg and Cory Booker on Sept. 12, 2019, during a Democratic presidential primary debate hosted in Houston. (AP)
Booker on the number of African Americans ‘under criminal supervision’

"We have more African Americans under criminal supervision today than all the slaves in 1850."

Booker omitted a key word in making this claim: men. This is an issue PolitiFact first looked into in 2014.

The comparison, however, wouldn’t likely hold if you include children and women, because women and children are less likely to be under some form of criminal supervision. 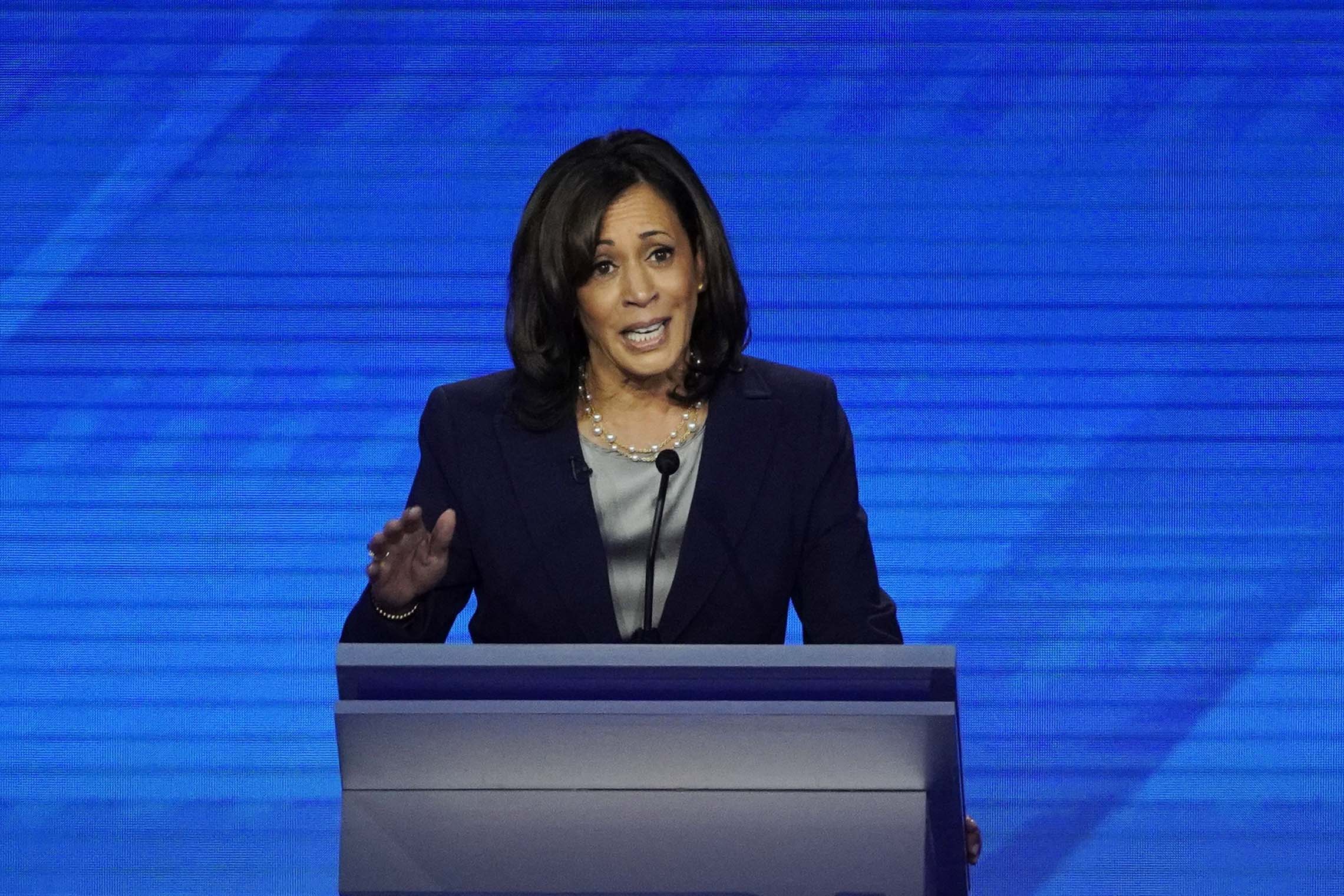 What to know about Kamala Harris's criminal justice record

"There have been many distortions about my record" on criminal justice.

ABC moderator Linsey Davis asked Harris about inconsistencies in her record on criminal justice, noting that Harris took more conservative positions as attorney general in California. "When you had the power, why didn't you try to effect change then?" Davis asked. Harris said her record had been distorted.

When we looked back at Harris’ actions as California attorney general and San Francisco’s top prosecutor, we found a mixed record. Some initiatives moved toward criminal justice reform while other policies were more consistent with traditional law-enforcement prerogatives.

RELATED: Kamala Harris claims she ‘took on Big Oil’ as California AG. How far did she go?

On the one hand, Harris achieved some notable reform-minded victories, including efforts to reduce recidivism and eliminate bias in law enforcement. She also burnished her progressive credentials in 2004 with a controversial decision as district attorney not to seek the death penalty for a man suspected of killing a police officer.

At other times, however, Harris’ positions disappointed criminal-justice advocates.

For instance, as attorney general in 2016, she opposed a bill to require her office to investigate shootings by police, and she declined to weigh in on state ballot measures to legalize recreational marijuana and to reduce penalties for nonviolent crimes. And despite her personal opposition to the death penalty, Harris defended it in court as attorney general.

"54 senators said, let's do background checks, let's get rid of assault weapons, and with 54 senators it failed because of the filibuster."

This is Half True. Warren is partially right, and partially wrong.

Warren was referring to votes on gun control legislation on April 17, 2013. A few months after the Sandy Hook shooting, lawmakers took up votes on multiple gun control measures. All of them failed.

An amendment for expanded background checks failed though 54 senators voted for it (60 votes are needed to break a filibuster threat).

A vote to ban assault weapons also failed, but only 40 senators – not 54 – supported it.

"We can specifically and demonstrably now show that there are 17,000 people unjustly incarcerated in America."

This claim is tricky. Booker was making a broad claim to refer to something very specific, and his calculations are based on his opinion of what it means to be "unjustly incarcerated."

Booker was talking about nonviolent drug offenders who would receive clemency under his criminal justice reform plan. He estimates that his plan would affect roughly 17,000 people in prison for drug-related crimes.

We found it plausible that 17,000 people would get out of jail if Booker’s clemency plan were to take effect. But that doesn’t mean those people are serving sentences for crimes they didn’t commit — the standard we initially wondered about when he said "unjustly incarcerated."