Mike Bloomberg’s rise as a presidential contender has pushed one controversial New York policy to the forefront of attacks in the Democratic primary: stop and frisk.

The practice allowed police to stop, question and frisk any person they believed was involved in criminal activity or in possession of a weapon. It expanded in New York under Mayor Rudy Giuliani in the 1990s, and Bloomberg continued the policy during his three terms as mayor.

Data shows that police disproportionately targeted African Americans and Latinos. A federal judge in 2013 ruled that the New York Police Department’s stop-and-frisk tactics violated the constitutional rights of minorities in the city.

Bloomberg has defended himself as other Democrats and President Donald Trump have bashed the tactic as racist and unconstitutional. Bloomberg says he "inherited" the stop-and-frisk policy and that he "cut it back by 95%" by the time he left office.

Bloomberg’s messaging ignores his role in expanding the practice and the dramatic increases in stops during most of his tenure. He also omits that the decline in his last years as mayor came amid public outcry about the policy and an impending lawsuit.

We put together this guide for understanding Bloomberg’s defenses on the policy, as well as the attacks.

The term was created in 1964, when New York City passed a law allowing police to stop, interrogate and frisk any person based on a reasonable suspicion that they were involved in a crime. This was further supported in the Supreme Court's 1968 decision in Terry vs. Ohio, upholding the law.

But Bloomberg obscures his consistent support of the policy during his time in office and for years after.

In May 2012, toward the end of his 12 years in office, Bloomberg dismissed critics of the practice as a vocal minority.

"My understanding is that the polls show overwhelming support by the public for the tactics we’ve been using to bring down crime," he said. "I think you’d find that it’s a minority of people who don’t like the tactic. We are very careful to follow the law. We go where the crime is."

Bloomberg also suggested that the policy saved thousands of lives and that he would not apologize.

In April 2013, Bloomberg rebuked criticism that stop and frisk targeted people based on their race or ethnicity. He called it a "common sense" policing tactic that helped get guns off the streets.

In July 2013, Bloomberg told the New Yorker: "I would suggest to the next mayor, whoever it is, that saving lives is the most important thing, more so than pandering. Stop-and-frisk has been shown to be—not the only, but the most effective tool in getting guns out of the hands of kids."

In August 2013, after a federal judge ruled that the NYPD engaged in unconstitutional behavior under the policy, Bloomberg claimed the judge "ignored the real-world realities of crime" and that the city did not get a fair trial. "You’re not going to see any change in tactics overnight," he told the New York Times.

Bloomberg has defended it in one way or another over the years and was still backing the policy in January 2019, saying it led to a decline in New York Cirty’s murder rate. (Those numbers have continued to drop even as the practice diminished.)

We reached out to Bloomberg’s campaign but did not hear back.

He publicly renounced the policy for the first time a week before launching his presidential campaign in November 2019.

He added: "I didn’t understand that back then the full impact that stops were having on the black and Latino communities ... I now see that we could and should have acted sooner and acted faster to cut the stops. I wish we had. I’m sorry that we didn’t. But, I can’t change history. However, today, I want you to know that I realize back then I was wrong, and I’m sorry."

He apologized again on Feb. 11, 2020, after audio surfaced from 2015 where Bloomberg can be heard saying one method to seize guns from male minorities is to "throw them up against the wall and frisk them."

Bloomberg said in a statement that he should have ended the policy faster and sooner. "I regret that and I have apologized — and I have taken responsibility for taking too long to understand the impact it had on Black and Latino communities." 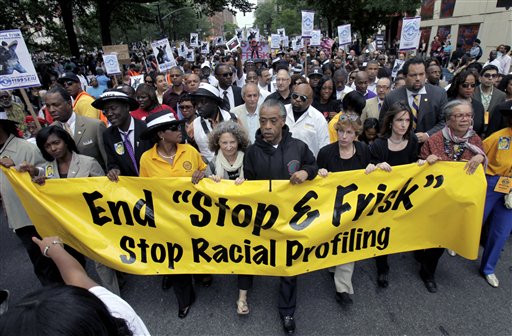 Bloomberg as a presidential candidate has tried to downplay his enforcement of the policy. His campaign website said stops fell by 95% by the time he left office.

That defense ignores the upswing in stops while he was mayor.

Some data also show that stop and frisk may not have had a significant impact, as crime was beginning to drop in New York before the policy was implemented. It continued to decline after the practice dwindled.

An analysis by the University of Pennsylvania’s Criminology Department found that deploying more police officers to high-crime areas in New York reduced crime by as much as 15%, but the additional use of stop and frisk "made almost no difference."

"The stops only had a detectable impact on crime when the stops were based on probable cause, and these kinds of stops were very rare," the report said.

Is stop and frisk unconstitutional?

Other candidates vying for the Democratic presidential nomination are calling out Bloomberg for his handling of stop and frisk, calling the policy racist and unconstitutional.

"As for what Michael Bloomberg did — stop and frisk — that is unconstitutional," Sen. Amy Klobuchar said on "Face the Nation" Feb. 16.

Judge Shira Scheindlin found the city had been conducting unconstitutional stops and frisks on two grounds: Officers were stopping and frisking people without reasonable suspicion, in violation of a 1968 Supreme Court case, Terry vs. Ohio, and the Fourth Amendment; and a disproportionate number of those stopped and frisked were minorities, in violation of the equal protection clause of the 14th Amendment.

PolitiFact looked into the constitutionality of the stop-and-frisk policy back in 2016, when then-candidate Donald Trump defended it during a presidential debate. Trump’s defense of the policy back then put him in line with Bloomberg’s past position. We rated that Trump claim Mostly False.

In the ruling, Scheindlin wrote that the NYPD engaged in "indirect racial profiling," leading officers to routinely stop "blacks and Hispanics who would not have been stopped if they were white."

Scheindlin said the NYPD could do stops and frisks as long as it made some changes to its practices. Stop and frisk continues in New York City, though it has largely diminished.

Email interview, David Weisburd, distinguished professor in the Department of Criminology, Law and Society and executive director of the Center for Evidence Based Crime Policy at George Mason University, Feb. 18, 2020

PolitiFact, Donald Trump and Lester Holt clash over whether stop-and-frisk is constitutional in New York, Sept. 28, 2016