Elizabeth Warren’s central message is that the core problem the country faces is that the government helps the powerful, not the bulk of Americans.

"When you see a government that works great for those with money and doesn’t work so great for much of anyone else, that is corruption, pure and simple," Warren said.

Warren’s solution is "big structural change," and it comes in three steps.

Step 1: Pass a sweeping anti-corruption plan that would "end lobbying as we know it."

Step 2: Change the rules to rebalance economic power. That involves enforcing antitrust law, boosting the power of unions, and enacting a wealth tax. The money from the wealth tax (2% on net worth over $50 million) would fund many of Warren’s plans, such as universal child care, increased funding for public schools and college debt relief.

Step 3: Ensure the right to vote. Warren called for a constitutional amendment to protect voter rights. She’d also push to ban all political gerrymandering, and roll back Citizens United, a key court ruling that lifted limits on corporate and union spending in elections.

Warren ended her speech on an optimistic note, giving examples of how government can protect ordinary citizens. She told a story about the Consumer Product Safety Commission making toasters safer, and how the agency she crafted, the Consumer Financial Protection Bureau, got companies to refund billions to customers.

Alluding to her more centrist Democratic rivals (but not mentioning them by name), she warned against campaigns "that nibble around the edges of big problems."

"If all Democrats can offer is business-as-usual after Donald Trump, Democrats will lose," Warren said.

Biggest applause line: Warren ticked off the changes she would make in election law, including "a constitutional amendment to protect the right of every American citizen to vote and to get that vote counted ... a federal law to ban all political gerrymandering ... another federal law to roll back every racist voter suppression law in America ... overturn Citizens United. Democracy is not for sale."

Post-Trump vision: Warren says money should have less power in politics and Congress should change the rules for taxes and spending to reduce the everyday costs of most American families.

Anything else: She used the word "big" 11 times, as in "big ideas," "big problems" and "big corporations." 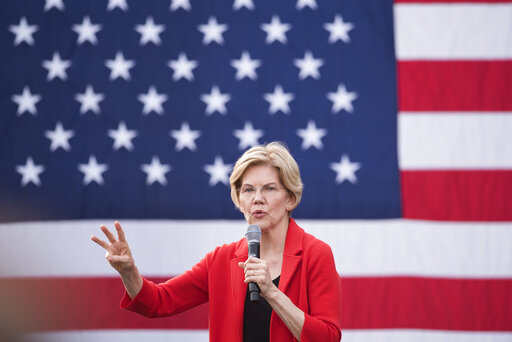 This is on the money. It’s part of Warren’s larger argument that ever larger firms wield too much power over wages, prices and policies in Washington.

Plenty of data documents the growing market power of companies across big swaths of the economy. The Economist crunched U.S. Census data and found "a tenth of the economy is at the mercy of a handful of firms — from dog food and batteries to airlines, telecoms and credit cards."

A Harvard Business Review article noted growing concentration in air travel, hospitals and even beer (four brewers control nearly 90% of the U.S. beer market). And that’s before looking at mega-mergers in agriculture and pharmaceuticals.

Academic studies find that where few firms dominate the market, wages are lower.

The wealth tax is like a property tax, except it covers not just "the real estate, but also the stock portfolio, the diamonds, the Rembrandt and the yacht."

This is only part of the picture. Warren casts the target of her wealth tax as essentially passive investments and luxury goods. What she leaves out is that the top 0.1% have a significant share of their wealth in private businesses. The amount ranges from 22% to 49%, depending on the estimating method.

While not every dollar in a firm goes to make it more productive or provide more jobs, some do, which helps boost the overall economy. But Princeton economist Owen Zidar warns that this is murky territory.

"The main asset of many private businesses owned by the top 0.1% is the human capital of the owner, for example, a law firm where the main asset is a partner’s network of clients or knowledge of the industry," Zidar said.

This is correct. While it’s tough to be precise — the wealthiest Americans don’t open their books to researchers — one credible estimate found that the average wealth of the top 0.1% was $61 million in 2016. Warren’s wealth tax would kick in at the $50 million mark.

When Warren said that the top 0.1% own about the same wealth as the bottom "90% of America," we rated that Mostly True. There are different ways to estimate who has how much wealth, but by any measure, it’s heavily concentrated at the top.

Child care and pre-K work is done largely by women, and "largely black and brown women."

This is close to accurate. According to a couple of analyses of Census data, 94% of the people who provide child care or pre-K education are women. Of these, 42% are black, Hispanic or Asian.

Warren’s word "largely" leaves a bit of wiggle room for interpretation. Women of color  are a large slice of the workforce, but not a majority. Researchers say that they represent a "disproportionate" share of these workers.

The wealth tax might not deliver. Warren hangs a lot on the $2.75 trillion over 10 years she expects from her wealth tax. The money would defray the costs of many of her major initiatives, from universal child care to cancelling student debt.

But that’s if the money comes in. European countries haven’t had much luck with wealth taxes. The American situation is considerably different and could buck the trend, but some economists say it might bring in far less than Warren’s predicts, perhaps as little as $1.1 trillion.

The Consumer Financial Protection Bureau "forced banks in this country to return more than $12 billion directly to the people they cheated."

This is basically right. The Consumer Financial Protection Bureau says on its website that "our actions have resulted in nearly $12 billion in relief for more than 29 million harmed consumers."

Warren simplified and said the money came from banks, while the bureau took action against credit card companies, student loan servicers, mortgage companies, and other financial players too.

In the 2000s, mortgages had become so complex, "they had a one in five chance of costing a family their home."

Complex mortgages, mainly subprime and adjustable rate mortgages, grew in the first half of the decade and accounted for a huge share of defaults.

A 2007 study of home loans in Massachusetts by the Federal Reserve Bank of Boston found that "homeownerships that begin with a subprime purchase mortgage end up in foreclosure almost 20 percent of the time." That was just for Massachusetts, but Chris Herbert, managing director at the Harvard Joint Center for Housing Studies, said that was "in line with the rest of the country."

A separate analysis from the Chicago Federal Reserve found default rates over over 35% for subprime loans made in 2006. And a major federal report on the foreclosure crisis noted that adjustable rate mortgages accounted for over half of foreclosure starts in 2008.

RELATED: Who is Elizabeth Warren? A bio of the Democratic presidential candidate

National Academies of Sciences, Engineering and Medicine, Transforming the Financing of Early Care and Education, 2018

U.S. Housing and Urban Development Department, Report to Congress on the Root Causes of the Foreclosure Crisis, January 2010

HealthLeaders.com, HEALTHCARE INDUSTRY MOST FOCUSED ON CONSOLIDATION, CONSUMERISM IN 2019, April, 22, 2019

SSRN, What Has Been Happening to Aggregate Concentration in the U.S. Economy in the 21st Century?, April 18, 2017

National Bureau of Economic Research, The rise of market power and the macroeconomic implications, August 2017

National Bureau of Economic Research, Top Wealth in the United States: New Estimates and Implications for Taxing the Rich, July 19, 2019