AMES, Iowa — Sen. Bernie Sanders, I-Vt., called for a systematic change in the economy, health care, criminal justice, and the environment during 45 minutes of remarks to an overflow crowd near the campus of Iowa State University.

"We not just fighting to win an election — we are fighting to build a movement," Sanders said Jan. 25.

How was he on his facts?

PolitiFact is traveling through Iowa in the run-up to the Feb. 3 caucuses this week fact-checking statements made by the Democratic caucus candidates. We previously fact-checked Andrew Yang at Muscatine Community College and we will be covering other candidates in the coming days.

The crowd frequently cheered Sanders’ calls to action, with some voters rising to their feet and chanting "Bernie! Bernie!" Voters yelled out "boos" when he railed against what he described as the military-industrial complex, the prison-industrial complex and GOP efforts to cut taxes for the ultrarich.

Sanders’ opportunities to campaign in Iowa in the home stretch have been limited because he is required to be in Washington D.C. for Trump’s impeachment trial.

"That’s my responsibility and that is what I will do," he said, however, "we are going to try to get back in the next 10 days as often as can."

The U.S. pharmaceutical industry "charges us the highest prices in the world."

The Commonwealth Fund, a New York-based health policy group, compared many common medications in the United States and several other countries. Using the American cost as a benchmark of 100, it calculated the cost in Canada, the United Kingdom, France, Germany, Switzerland and Australia. Germany was the closest match to the American price tag, but Canada, the UK and Australia were all about half the cost. Other studies reached the same general result. Broadly, the United States spends more on drugs because prices for many drugs are higher, and patients, usually on the advice of a doctor, take newer, high-cost drugs.

"The average American worker is not making a nickel more in real, inflation-accounted dollars than he or she did 45 years ago."

The median worker in 2018 did make more than a worker in 1974 once you adjust for inflation. That said, the growth was quite small — a cumulative increase above inflation of only about 11% over those 45 years.

In the meantime, it’s also worth noting that the wage data used for this calculation excludes income from Social Security, Medicare, Medicaid, food stamps and refundable tax credits like the earned income tax credit. So it’s an incomplete picture of income.

We fact-checked that claim in September and rated it Mostly True. Sanders was referring to growth in pre-tax, pre-government benefit income during the economic recovery following the Great Recession from 2009 to 2017, which was calculated by one of the leading experts in the field of income inequality research.

However, it’s not the only way to measure income, and other economists pointed to more comprehensive, though slightly more dated, studies that compare income growth after accounting for what people pay to and receive from the government. 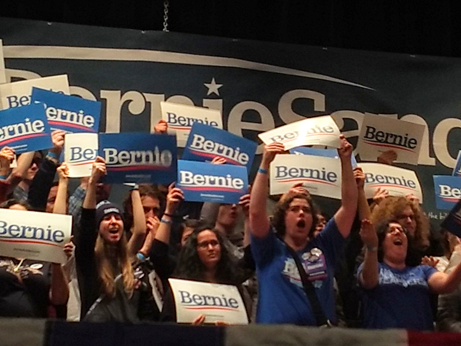 "If you are a woman you should not make 79 cents on the dollar compared to men."

This is more complicated than it sounds.

However, that is not the figure for equal work. The gender discrepancy reflects the professions, seniority, and hours worked by the two sexes, whether by choice or by historical patterns; discrimination is one factor but not the only one. Attempts to measure the gap between men and women doing equivalent work have shown a narrower difference, though it depends heavily on the specific profession in question.

RELATED: The fight between Joe Biden and Bernie Sanders over Social Security, explained

"Today we spend twice as much money per person on health care as do the people of any other country on earth."

The United States spent more per capita on health care than every other country studied by the Organization for Economic Cooperation and Development in 2018, and the U.S. total was twice as much as most of the countries studied — but not all of them.

The countries that the United States did not exceed by twice as much in 2018 were Switzerland, Norway, Germany, Sweden, Austria and Denmark.

"We have more people in jail in the United States than China does."

This is accurate, according to World Prison Brief, a project of the Institute for Crime and Justice Policy Research and the University of London’s Birkbeck College.

"What the United Nations tells us — if present trends continue —  there will be tens of millions of climate refugees."

There is much uncertainty about this prediction, though Sanders was more cautious about his projection in Ames, citing "tens of millions" rather than an instance last year when FactCheck.org checked him saying "hundreds of millions."

A 2014 report by the International Organization for Migration, a UN agency, addresses the issue of how many people who will move as a result of climate change and environmental factors.

"There is great uncertainty about the figures," the report states. "Forecasts for the number of environmental migrants by 2050 vary by a factor of 40," specifically between 25 million and 1 billion.

The report said the figures will ultimately depend on multiple factors, including what actions are taken to combat climate change and economic growth. Due to the uncertainty, the report states that the organization "does not advance an estimated figure."

A 2018 report by World Bank predicted that climate change could lead to more than 140 million people migrating within their countries’ borders by 2050 in three developing regions of the world: Sub-Saharan Africa, South Asia, and Latin America.

See additional sources throughout the story