COVID-19 by the numbers: A status report

A sign greets visitors outside the Curb Event Center at Belmont University as preparations take place for the second Presidential debate on Oct. 20, 2020, in Nashville, Tenn. (AP)

• Heading into winter, scientists worry about a rising coronavirus case load in the United States, as well as increases in hospitalizations and the rate of tests coming back positive. In addition, racial and ethnic minorities continue to be hit the hardest.

• A relative bright spot is that deaths have not spiked in tandem with the rising number of infections and hospitalizations. However, the United States remains among the hardest hit countries per capita for coronavirus deaths, exceeding the rates in almost all of its advanced industrialized peers.

President Donald Trump and his Democratic opponent, Joe Biden, have sparred over the state of the coronavirus pandemic in the United States. During a town hall on Oct. 15, Trump said the U.S. has "turned the corner" on the virus, but Biden countered that Trump has gone "round the bend" if he believes that.

As the candidates meet for their final debate, here’s a look at where the country, and the world, stands in the battle against the coronavirus.

The number of coronavirus cases is climbing once again, after falling consistently between late July and mid-September. Cases are now at their highest point since early August, with almost 60,000 new confirmed infections a day, according to the COVID Tracking Project. That’s only about 10% lower than the peak in late July.

Epidemiologists are worried that the change in seasons could only make matters worse, as colder weather drives more people indoors, where the virus can spread more efficiently.

"My hope is that people will continue to limit interactions to their immediate households, but with the holidays coming up, I think this could be a challenge," said Nicole Gatto, an associate professor of public health at Claremont Graduate University.

Scientists also worry about pandemic fatigue. "I know here I've seen more people in public who are unmasked, despite a state mask mandate," said Tara C. Smith, a Kent State University epidemiologist. "Schools in my home county are opening despite spikes of cases there because parents are tired."

Hospitalizations today are lower than in previous spikes, but the number could increase as more people are infected. And in the past few weeks, there has been a modest spike in hospitalizations.

The positivity rate, which measures what percentage of tests come up positive for the virus, is also going up again during the past few weeks. This is a concern because higher positivity rates are an indicator of community spread.

The one relative bright spot is that the number of deaths has eased somewhat. Deaths were highest during the initial April spike and then peaked at a lower rate in early August. But since that August spike, deaths have fallen fairly consistently.

A pair of recent peer-reviewed studies have documented declines in deaths for all groups, including the elderly and those with preexisting health concerns. Possible factors, according to the authors, are an improved understanding among doctors of how to treat the disease, as well as increases in mask-wearing, which can reduce the initial viral load an infected person receives.

That said, deaths have settled in at about 800 a day — a substantial level — and COVID-19 remains deadlier than other infectious diseases.

In fact, the Centers for Disease Control and Prevention continues to find "excess deaths" beyond historical norms that are believed to stem either from the coronavirus itself or from the societal impacts of the virus, including people being too concerned about the virus to see a doctor, or from bouts of depression or addiction during quarantines.

The virus is also hitting minority groups especially hard, according to CDC data.

Black coronavirus patients, for instance, are 2.8 times as likely as whites to be infected, 4.7 times as likely to be hospitalized, and just over twice as likely to die from the virus. The disparity is similarly high for Latinos and Native Americans. The differential impact is believed to stem from higher rates of pre-existing conditions and reduced access to high-quality health care. 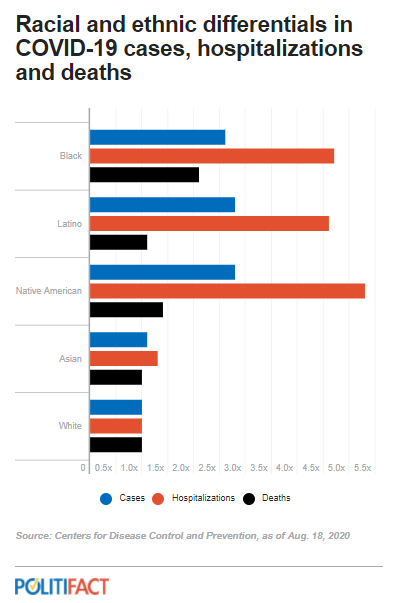 Globally, the United States continues to have one of the highest per capita rates of death from the virus. The U.S. has the 11th-highest rate of any country, according to Johns Hopkins University, trailing San Marino, Peru, Belgium, Andorra, Bolivia, Brazil, Chile, Spain, Ecuador, and Mexico. 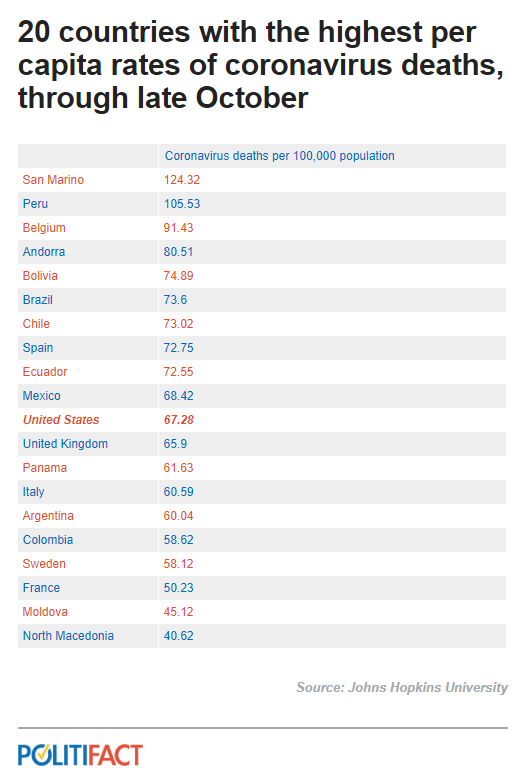 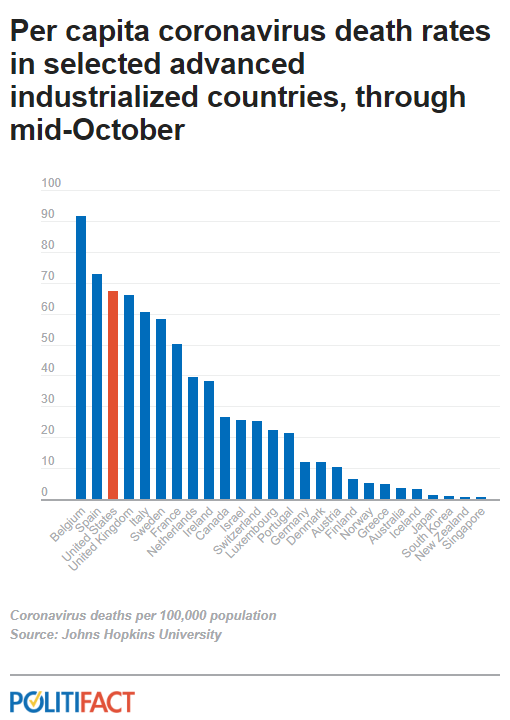 The hopeful news is that there’s a long list of vaccines in the pipeline, with some likely to become available in the first half of 2021. Here’s an updated list.

"Our experience over the last several months has made us better at managing disease among infected people," Gatto said. "However, I do not think we should be overconfident, lay back and rely on medicine simply because we’re better at treating COVID. The best way forward is still prevention."

Centers for Disease Control and Prevention, "COVID-19 Hospitalization and Death by Race/Ethnicity," Aug. 18, 2020

The Guardian, "Biden says Trump 'gone round the bend if he thinks we've turned corner' on Covid as cases surge – as it happened," Oct. 18, 2020