• Joe Biden is centering his closing argument against President Donald Trump on the coronavirus pandemic and the economy, at times combining attacks over Trump’s coronavirus response with an economically populist pitch.

• Biden has also brought up health care and Social Security in his speeches as Election Day draws closer. Some of his statements are largely accurate, while some overlook important context.

• We also fact-checked the closing arguments of Trump.

As Election Day 2020 draws near, Democratic nominee Joe Biden is centering his closing argument against President Donald Trump on the coronavirus pandemic and the economy.

"I have a plan to deal with this pandemic," Biden said in Durham, N.C., on Oct. 18. "Responsibly testing, tracing, masking. Not politicizing a race for a vaccine — planning for its safe and equitable distribution. Providing funding for PPE and other resources for schools to reopen safely. Easing the caregiving crisis so many families are experiencing, squeezed between raising your kids and caring for an aging, loved one. And protecting your health care."

In an Oct. 23 appearance in Delaware, Biden blamed Trump for "holding rallies with no masks, no social distancing" and for "inviting the virus into the White House."

At times, Biden has combined attacks over Trump’s coronavirus response with an economically populist pitch.

"This president cares more about his Park Avenue perspective on the world, the stock market, than he does about you," Biden said in North Carolina.

Biden is also offering himself as a politician who will dial back the polarization of American politics.

"Folks, we can only do this if we come together as a country," he said in North Carolina. "Abraham Lincoln told us that a house divided cannot stand. Today, trust is ebbing. Hope seems elusive. And instead of healing, we’re being ripped apart. I refuse to let that happen. We need to revive a spirit of bipartisan in this country. A spirit of being able to work with another."

Here is a selection of Biden’s frequent talking points from the closing days of the campaign on the coronavirus, the economy, health care and Social Security. Some are largely accurate, while some overlook important context. The claims are taken from speeches in Delaware, Pennsylvania and North Carolina since Oct. 18.

Biden is right to be skeptical of Trump’s assertion that the United States is "rounding the corner" on defeating coronavirus, which we have rated False. The country has not seen significant and sustained reductions in the spread of the virus. Cases have been rising steadily since mid-September, hospitalizations have been rising for several weeks, and positivity rates have been rising since the end of September.

"A new study from Columbia University suggests that anywhere between 130,000 and 210,000 of those (coronavirus) deaths were avoidable."

This is an estimate, but Biden is correct that a study with this conclusion was published on Oct. 21 by Columbia’s National Center for Disaster Preparedness. The deaths could have been prevented with "earlier policy interventions and more robust federal coordination and leadership," the authors concluded.

"When Trump was asked this week what he’d do differently to get the pandemic response right from the start, his answer was ‘not much.’"

Trump did say this in an Oct. 21 interview with Eric Bolling of Sinclair Media Group.

Bolling asked Trump, "I know this is hard to answer, but let me ask you this anyway. With COVID, is there anything that you think you could have done differently? If you had a mulligan or a do-over on one aspect of the way you handled it, what would it be?"

This is basically correct. As of Oct. 26, the U.S. Census Bureau estimated that the population of the United States was 330.5 million, which amounts to 4.2% of the estimated world population of about 7.7 billion.

"We have 1,000 people dying each day" from the coronavirus.

"It’s estimated that if we just wore masks, over the next few months we’d save almost 100,000 lives."

This tracks with a study by the University of Washington's Institute for Health Metrics and Evaluation released the previous day. The authors concluded that if 95% of Americans wore masks in public, more than 100,000 lives could be saved through February. By comparison, in September, only about 49% of Americans said they always wore a mask in public. It’s important to note that masks must be used with other measures, such as social distancing and not attending gatherings with large numbers of people, especially indoors. 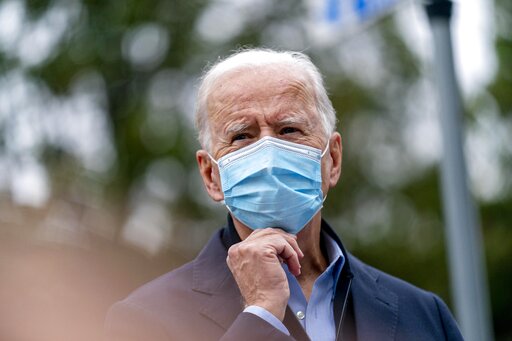 Democratic presidential candidate Joe Biden speaks to the media outside a voter service center on Oct. 26, 2020, in Chester, Pa. (AP)

"Before the pandemic he handed out a $1.5 trillion tax giveaway that went largely for big corporations and the wealthy."

This is a bit exaggerated. On the one hand, there’s broad agreement that higher-income people did best under the 2017 tax bill pushed for and signed by Trump. Those making $200,000 or more got about half of the cuts. But Biden’s formulation glosses over the reality that most taxpayers got a boost, including those making under $200,000.

As a general rule, this is correct. No taxpayer earning under $400,000 should see a direct tax increase under Biden’s plan, though they could be hit indirectly. Biden’s hike in the corporate tax rate could affect everyday Americans as companies adjust their wages and prices in ways that are passed along to workers and consumers.

However, Biden has proposed more than a dozen tax cuts, notably a one-year expansion of the child tax credit. Independent analysts’ assessments suggest that, on balance, the tax cuts should outweigh any passed-along increases from the corporate tax hikes.

"Since the start of this pandemic, billionaires in this country have seen their wealth increase by more than $800 billion."

This needs context. Overall, the wealthy have been insulated from the pandemic in ways that working people haven’t. But there are issues with this number.

Two liberal groups, Americans for Tax Fairness and the Institute for Policy Studies' Program for Inequality, are tracking estimates of the wealth of America’s billionaires. Current estimates show the collective gains by billionaires since mid-March have been $845 billion

However, stock values, which account for much of billionaires’ net worth, are volatile. And when making these calculations, timing matters.

Starting the count of the billionaires’ wealth gains in mid-March means starting at the low point of their wealth. It excludes a sharp decline between mid-February and mid-March, when concern was growing about how the coronavirus was going to affect the economy. The level of the Standard & Poors 500, a broad measurement of the stock market, is now about where it was before the decline began, meaning that billionaires have roughly made back what they’d lost.

Trump "thinks that $15 an hour minimum wage is too much for America’s essential workers."

This needs context. In the final presidential debate, Trump said he "would consider it," though he said he prefers to have the minimum wage be adjusted on a state-by-state basis, because the economic landscape in "Alabama is different than New York. New York is different from Vermont. Every state is different."

"An independent analysis put out by Moody’s, a Wall Street firm, projects that my plan will create 18.6 million jobs. That’s 7 million more jobs than the President’s plan."

This is a fair description of Moody’s projections that compare the economy under a Biden victory (with Democrats winning control of the Senate and enacting Biden’s economic program) and a Trump victory (with Republicans continuing to control the Senate).

The Moody’s analysis points to elements of Biden’s approach that they believe will offer stronger economic growth, including "aggressive government spending" on infrastructure, education, and the social safety net, as well as stronger global trade, higher levels of immigration, expansion of paid family leave and elder care, and a higher minimum wage.

"Over half the people in America say if they got a bill for $400 they didn’t expect in one month, they wouldn’t be able to pay it. They’d have to borrow the money or they’d have to sell something."

This is wrong; Biden misstates how many people would struggle to pay a bill. A biennial Federal Reserve Board study released most recently in 2019 found that if faced with an unexpected expense of $400, 61% of adults said they would cover it with cash, savings, or a credit card paid off at the next statement. By contrast, 27% would need to borrow or sell something to pay for the expense, and 12% would not be able to cover the expense at all. The final two categories total to 39%, which is not "over half." 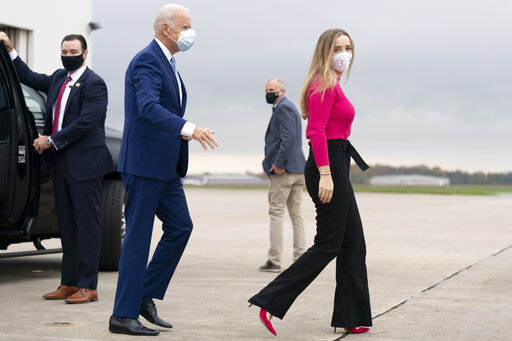 Democratic presidential candidate Joe Biden and his granddaughter Finnegan Biden board his campaign plane at in New Castle, Del., on Oct. 27, 2020.(AP)

If the Affordable Care Act is overturned, "100 million Americans … will lose protections for preexisting conditions."

Mostly True. Estimates vary depending on the definition, but Biden’s number is at the midpoint of estimates, we found. There is wide agreement that if the Affordable Care Act is overturned by the Supreme Court, millions of Americans with medical conditions could face difficulty in accessing health insurance or could see price spikes.

The White House has said that Trump favors something more limited: to forgive the taxes that would have been due from a four-month payroll tax holiday he enacted by executive order to ease the economic impact of the coronavirus pandemic. Trump has also mused about terminating the tax, which would put the program under great financial strain.

However, Trump also said he would look to Congress to maintain the program in that scenario by drawing on general revenues — potentially in excess of $1 trillion a year. The actuary said that if that approach were taken, it would leave benefits essentially unaffected. Even if Trump wanted to eliminate the payroll tax, he couldn’t accomplish it unilaterally; he’d need Congress to go along.