About face on mask-wearing: Why did the federal guidance change?

• The federal government’s guidance on wearing masks to curb the spread of the coronavirus changed dramatically twice during the pandemic. The most recent change, which said that fully vaccinated people could largely stop wearing masks, came in May, and its suddenness surprised many Americans.

• While some critics raised questions about the rapid turnabout, experts say that progress in vaccination, declines in cases, new scientific research, and real-world evidence from other countries justified the change in policy.

• Despite this, public health experts acknowledged that the federal government’s messaging over masks has been flawed and has prompted needless confusion among the public.

To say that federal guidance on mask-wearing has been confusing would be an understatement.

Back in 2020, during the earliest days of the coronavirus outbreak in the U.S., mask-wearing was discouraged. Then officials changed this guidance, citing clearer findings that the virus could be transmitted by people who showed no symptoms.

The advice to wear masks remained in force for about a year, even for people who were vaccinated. But in mid-May 2021 — amid widespread use of vaccines and falling case counts — federal health officials changed their guidance again.

Currently, the Centers for Disease Control and Prevention says that "fully vaccinated people can resume activities without wearing a mask or physically distancing, except where required by federal, state, local, tribal, or territorial laws, rules, and regulations." Masks are also still required when traveling by air, rail, bus and other forms of public transportation.

The CDC’s change represented a landmark moment in the year-plus pandemic, opening up the possibility of a widespread return to normalcy. But many Americans struggled to make sense of it.

As an example, a PolitiFact reader pointed out two high-profile comments by Anthony Fauci, director of the National Institute of Allergy and Infectious Diseases, that were almost 180 degrees apart, despite being separated by just two months.

Here’s a March 18 exchange with Sen. Rand Paul, R-Ky., during a Senate hearing:

Fauci: "Let me just state for the record that masks are not theater, masks are protective."

Paul: "Post-immunity, they are theater. If you already have immunity, you're wearing a mask to give comfort to others. You're not wearing a mask because of any science."

Fauci: "I totally disagree with you."

"Before the CDC made the recommendation change, I didn’t want to look like I was giving mixed signals, but being a fully vaccinated person, the chances of my getting infected in an indoor setting is extremely low, and that’s the reason why in indoor settings now I feel comfortable about not wearing a mask because I’m fully vaccinated."

That’s a relatively quick about-face. We wanted to know what proof and evidence prompted the change.

The CDC and Fauci’s office did not respond to inquiries for this article, and the White House declined to comment. In an interview with Axios, Fauci did hint at one potentially relevant distinction: Paul has publicly announced that he won’t be vaccinated because he previously recovered from the disease. As a result, he wouldn’t be covered by the current CDC guidance. (People who have recovered from the coronavirus are still urged to get the vaccine, due to uncertainty about the strength and duration of immunity.)

More broadly, however, a range of public health experts told PolitiFact that there have been specific developments that explain, and justify, the about-face on masks, even though they also say that officials did not deliver the messages in a clear, understandable way.

"If we’ve learned anything in this pandemic, it’s that our understanding evolves, and we have to communicate better about why our answers and practices might change over time," said Rebecca Wurtz, director of public health administration and policy programs at the University of Minnesota’s School of Public Health. 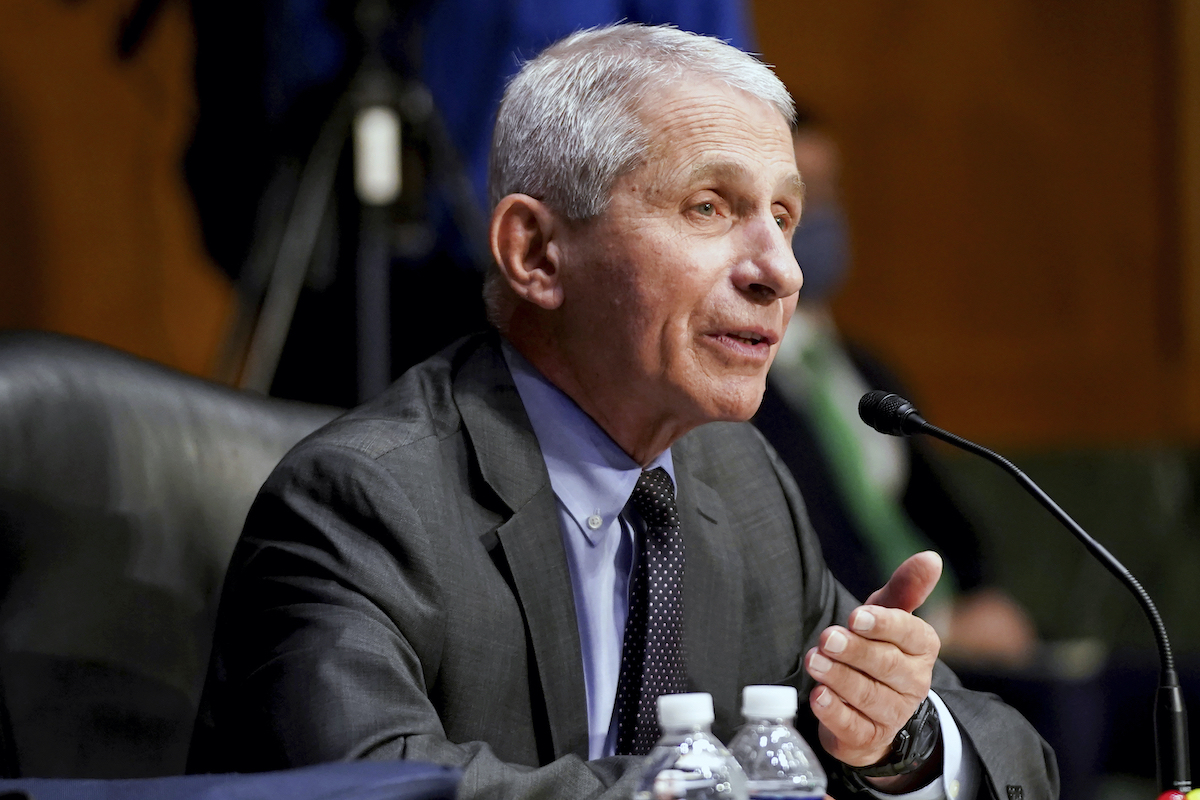 What changed between mid-March and mid-May 2021?

Scientists told PolitiFact that multiple developments occurred between March and May that pointed toward a loosening of the mask guidance. Here are some of those factors:

A rise in vaccinations: U.S. vaccination accelerated significantly over the course of the spring. By mid-March, roughly 33 million Americans would have had full immunity, based on how many first shots were given by Feb. 1. By mid-May, that number had more than tripled to about 113 million.

"All things being equal, as more and more people get immunized, particularly in vulnerable groups, masks will play an increasingly minor role in the public health response," said Babak Javid, a professor of medicine at the University of California-San Francisco.

A declining case load: The rising number of vaccinated Americans has produced a decline in the number of cases nationally, and in most states.

"Cases started plummeting in the U.S. after we hit 40% in first doses on April 14, providing further security to Dr. Fauci and others that masks could be removed for the vaccinated," said Monica Gandhi, a professor of medicine at the University of California-San Francisco.

Similarly, the seven-day moving average for deaths fell from about 1,000 a day to about 600 during that period, a 40% drop.

New scientific research: "There has been substantial new science during the two periods between March 18 and May 18 in terms of assessing the efficacy of vaccination in both preventing disease and preventing infection," said A. Marm Kilpatrick, a professor of ecology and evolutionary biology at the University of California, Santa Cruz.

For instance, research published by the CDC on April 2 found that vaccines reduce asymptomatic infection and the subsequent transmission to others. There’s also research supporting the effectiveness of the vaccine against variants.

"Our knowledge on immunity and reinfection is rapidly changing," said Mary Kathryn Grabowski, an assistant professor in epidemiology at Johns Hopkins University.

Evidence beyond the United States: "Real world effectiveness can sometimes be quite different" from what clinical trials indicate, Kilpatrick said.

In Israel, the first country to reach high levels of vaccination quickly, the number of cases declined rapidly, said Brooke Nichols, an infectious-disease mathematical modeler at the Boston University School of Public Health. A study showing vaccine effectiveness in Israel was published on May 6. Other research has found strong protection from the vaccines in Qatar.

All in all, "I think it's not only valid, but desirable to change one's mind," Javid said.

Shortcomings in the federal mask messaging

While experts told PolitiFact that they agree the shift on mask policy in May was justified, they added that the messaging was flawed.

CDC may have "misread the room" when it unveiled the mask guidance, said Nicole Gatto, associate professor of public health at Claremont Graduate University. "If it was intended to be a carrot for those who have yet to be vaccinated, it may have backfired and instead introduced unnecessary confusion," she said.

For starters, experts were disappointed to see little explanation of the specific metrics that led to such a significant change. "Many, including me, had been advocating for a blanket lifting of mask mandates for all once we reached a certain vaccination rate and case or hospitalization metric," Gandhi said.

Meanwhile, the switch seemed sudden, with little communications groundwork laid in advance. Some experts would have preferred a more phased-in approach.

"I probably would have waited a couple of months to relax guidance on masks, given that eligibility was only expanded to all adults just a few weeks ago in most states, meaning that many have not had the chance to be fully vaccinated," she said. "Community incidence rates, while having dramatically lowered in the last few months, are still relatively high."

Several experts added that the policy shift, while well-intended, largely ignored the practical problem that there’s no way to tell the difference between vaccinated and unvaccinated Americans, such as a widespread "vaccine passport" system. This means that people who are unvaccinated can continue to go unmasked even though they are not supposed to under the guidelines.

"Given the strong correlation between anti-masking and vaccine-hesitancy, this creates a challenge that increases risk to everyone, and prolongs the pandemic," Kilpatrick said.

The politicization of so many aspects of the pandemic has made CDC’s task vastly harder, said Texas A&M University-Texarkana virologist Ben Neuman.

"The social pressure from everyone ‘being in this together’ has not materialized in this country, as it has in others," Neuman said.

That reality, combined with the challenges of navigating a fast-moving public health situation, helps explain why there have been some messaging missteps, Grabowski said. "I think we should all be a little more humble and forgiving in such a dynamic environment," she said.

Centers for Disease Control and Prevention, "When You’ve Been Fully Vaccinated: How to Protect Yourself and Others," May 16, 2021

Yoel Angel, Avishay Spitzer, Oryan Henig, et al, "Association Between Vaccination With BNT162b2 and Incidence of Symptomatic and Asymptomatic SARS-CoV-2 Infections Among Health Care Workers" (article in the Journal of the American Medical Association), May 6, 2021

Syra Madad, Monica Gandhi, and Ashish K. Jha, "These are the metrics that will tell us when we can safely lift restrictions," April 7, 2021

ScienceNews, "The CDC’s changes to mask guidelines raised questions. Here are 6 answers," May 24, 2021

Vox.com, "The CDC’s mask guidelines are scientifically sound — if you actually read them," May 21, 2021

Email interview with Rebecca Wurtz, director of public health administration and policy programs at the University of Minnesota’s School of Public Health, May 19, 2021

Email interview with Babak Javid, professor of medicine at the University of California-San Francisco, May 19, 2021

Email interview with Monica Gandhi, professor of medicine at the University of California-San Francisco, May 23, 2021

Email interview with A. Marm Kilpatrick, professor of ecology and evolutionary biology at the University of California, Santa Cruz, May 21, 2021