The Democrats’ reconciliation bill: What you need to know

Congress is considering how much of President Joe Biden’s public investment agenda to implement — but in an unusually confusing fashion.

In August, the Senate passed a roughly $1 trillion infrastructure bill backed by Biden, winning the support of all Senate Democrats as well as 19 Republicans. The infrastructure bill now needs to be approved by the House before being sent to Biden’s desk.

But Democrats are also pursuing a second measure, known as a "reconciliation" bill, that includes many of the parts of Biden’s tax and spending proposals that attracted little or no buy-in from Republicans. Many in the GOP argue that the national debt is too large for this type of spending, and that it could contribute to already higher-than-normal rates of inflation.

Undeterred by such opposition, the House is currently hammering out the language for a measure that will add up to $3.5 trillion in spending or tax cuts over 10 years. It might include such provisions as clean energy incentives, housing, child care subsidies, and the expansion of Medicare to include dental, hearing and vision benefits.

The House is expected to vote on the reconciliation measure around the same time it votes on the infrastructure bill. But due to the Democrats’ slim majorities — and the party’s need to satisfy its ideologically broad range of members — the timing and sequence of those votes has been subject to considerable debate.

Here’s a rundown on what to expect as these two key pieces of Biden’s agenda move forward in September.

Reconciliation is a process for passing a certain type of fiscal legislation with just a simple majority of 51 Senate votes — rather than the 60 that would be needed to overcome a filibuster.

The idea behind budget reconciliation is to use a two-step process for federal budgeting. The first step is to pass a blueprint called a budget resolution that gives an outline of budgetary goals. Both chambers finished this first step in August, without Republican support.

The second step is to pass a bill to "reconcile" those broad goals with a more detailed implementing legislation. Both chambers must pass identical versions of the legislation. The agreed-upon bill would then head to the White House for Biden’s signature.

Why did the Democrats structure the legislation this way?

Biden pursued this two-track solution because he wanted one bipartisan package and one package that only Democrats supported.

On the one hand, Biden framed his run for president as someone who would reach out to Republicans and try to collaborate on common goals. That’s why he pushed for a bipartisan bill consisting of elements that could attract support from many Republican lawmakers, including investments in roads, waterways, electrical infrastructure and broadband.

At the same time, Biden also ran for president seeking initiatives that receive strong support from rank-and-file Democrats, and especially those in the more progressive wing of his party. Those include investments in health care, clean energy and housing and child care.

By using the reconciliation process, which can only be attempted once every fiscal year, Biden had to throw a lot of different initiatives into one large reconciliation bill.

"By putting all of his eggs in two baskets, Biden upped the ante but also created more (opportunities) for building majority coalitions in the two houses," said Steven S. Smith, a political scientist at Washington University in St. Louis  "The aggregate cost targets are large and create problems of their own, but he was trying to exploit his momentum and the mood of the country by keeping a focus on just two legislative vehicles."

What does Biden want to pass through Congress?

Some of Biden’s policy priorities were included in the bipartisan infrastructure bill, mainly "hard" infrastructure investments in transportation and energy systems. But some spending Biden wanted didn’t make it into that bill — such as money for upgrading veterans’ hospitals, American manufacturing competitiveness, and job training — and these have been combined with "softer" human infrastructure initiatives proposed in Biden’s American Families Plan for possible inclusion in the reconciliation bill now being put together.

To partly pay for such outlays, the bill might include an increase in the top tax rate to 39.6% and an end to certain capital gains tax breaks.

But these are goals. None of these are certain to be in the reconciliation bill currently being negotiated, and some could be cut back in scope or duration.

How large could the reconciliation bill be?

While the broad outlines of Biden’s proposal are known, the specific elements of the reconciliation bill are not known as of early September. House Democratic leaders are working behind closed doors with committee chairs and other key lawmakers to find something that can gain near-universal support within the progressive House Democratic caucus, while also keeping in mind what more centrist Senate Democrats would be able to support. 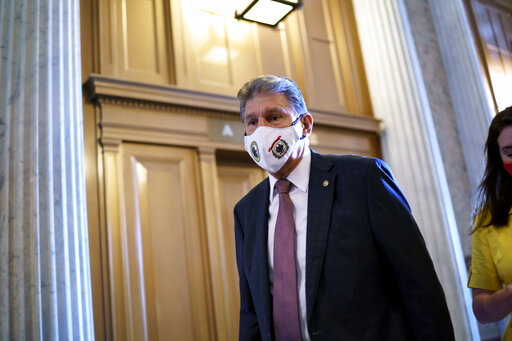 How united are Democrats?

Progress on hammering out the details of a reconciliation bill has been hampered by internal sparring among Democrats.

The Democrats’ narrow margins in the House mean that factions within the caucus potentially have a lot of leverage to shape the final bill. The two most important factions so far have been progressives and centrists.

Progressives, including Rep. Alexandria Ocasio-Cortez, D-N.Y., see even the maximum $3.5 trillion amount as a downward concession from what they were initially seeking. Meanwhile, centrist Democrats, including those who could face tough reelection bids in 2022, are wary of spending that much and are seeking to shrink the reconciliation bill’s bottom line.

This intra-party conflict forced House Speaker Nancy Pelosi, D-Calif., to draw on her legislative experience just to secure passage of the budget resolution that needed to precede any reconciliation bill. Progressives want to vote on the reconciliation bill first, before the bipartisan infrastructure bill; centrists want to do the opposite.

Ultimately, a "rule" governing a floor vote on the budget had to be debated and renegotiated three separate times in about 24 hours before progressives and centrists would agree to proceed to the vote. Centrists settled for an agreement from Democratic leaders to hold a vote on the infrastructure bill no later than Sept. 27.

And that’s just for House consideration. Over in the Senate, the challenges are equally steep.

Democratic Sen. Joe Manchin of West Virginia, whose state strongly backed Donald Trump for president in 2016 and 2020, has said he won’t support a reconciliation bill as big as $3.5 trillion. Other Democrats may join him.

Since every Democratic vote in the Senate will be needed to pass the reconciliation bill, Manchin’s opposition, and the possible opposition of others, means that a reconciliation measure with a chance of making it to Biden’s desk may have to end up well below $3.5 trillion in spending.

"There is zero chance of a reconciliation bill getting a party-line vote in the Senate and the House without major concessions to moderate Democrats on the price tag and how it’s paid for," said Donald R. Wolfensberger, a Congress scholar at the Woodrow Wilson International Center for Scholars.

What could be done to trim the reconciliation bill?

Democrats could cut specific spending programs entirely, or they could cut a whole lot of initiatives by the same percentage, perhaps by authorizing programs for a shorter period of time. They could also propose more tax increases on high-income taxpayers or corporations than they were initially considering. These options are likely part of the closed-door negotiations now under way.

Of course, cutting the reach of the bill risks losing the support of progressive Democrats, and that would torpedo the entire effort unless Democrats can pick up enough moderate Republicans to balance out the progressive losses.

How serious are the centrists and progressives about derailing the process if they don’t get their way?

Experts said it’s certainly possible that either centrists or progressives would tank the bill if they can’t get everything they want, though such a course would be risky since the Democrats are at risk of losing their slim majorities in the 2022 midterm elections.

"It may be too early to be talking about a snowball’s chance in Hades, but the intraparty heat in the Democratic caucuses has already set off the pre-melt warning sirens," Wolfensberger said.

Goldwein said that while the factions’ positioning is deeply felt, he added that there’s a good chance that Democrats want to get to yes. "I think the leadership and the administration will lead them to a deal," he said.

PolitiFact, "What you need to know about the budget reconciliation process," Feb. 8, 2021

Washington Post, "With bulk of their agenda on the line, Democrats gird for battle over $3.5 trillion budget package," Sept. 7, 2021

Donald Wolfensberger, "While Democrats change the rules, Republicans change the subject" (op-ed in The Hill), Aug. 29, 2021