People queue to offer flowers and prayers for former Prime Minister Shinzo Abe, at Zojoji temple prior to his funeral Tuesday, July 12, 2022, in Tokyo. (AP)

When Shinzo Abe, Japan’s longest-serving prime minister, was assassinated July 8 at age 67, some questioned how this shooting could have happened in a country known for its stringent firearms regulations.

Japan does have some of the world’s strictest gun control laws. But experts PolitiFact reached said the circumstances that led to Abe’s fatal shooting revealed the lengths the perpetrator had to take to circumvent these rules and should not be held as an example of why gun laws don’t work.

Global data show that only a small percentage of Japanese people own firearms. And while Abe’s shooting death is highly visible and shocking, shootings in general are exceptionally rare in Japan, according to law enforcement figures.

What are Japan’s gun laws?

Japan’s strict approach to gun control traces to the 16th century, when military leader Toyotomi Hideyoshi sought to unify the country under his rule after a period of war and chaos, said Nick Kapur, an associate professor of history at Rutgers University who specializes in modern Japan and East Asia.

"One of his first acts was to launch a nationwide ‘sword hunt’ to demilitarize the populace and ensure future stability," Kapur said. "During Japan's long, peaceful Edo period (1603-1868), civilians were strictly forbidden to possess weapons of any kind, including guns, swords, and spears."

In 1958, Japan adopted the Firearm and Sword Possession Control Law, which barred civilians from owning firearms and swords, except in certain circumstances. The legal purchase of long guns, i.e., rifles and shotguns, is typically allowed only for hunting, sport or industrial use, and these firearms are heavily regulated by the government.

In Japan, "it is very, very difficult to get hold of a gun," said Satona Suzuki, a lecturer in modern Japanese history at SOAS University of London.

To buy a firearm in Japan, a person must obtain a gun license, which involves a 12-step process detailed in The New York Times that includes taking a firearms class; passing a written exam, background check and firing test; applying for a gunpowder permit; and explaining the need for a gun to police. A prospective gun owner must also buy safety equipment to store their firearms and ammunition in separate lockers.

After completing these steps, a person can buy a gun and register it at a police station. Japan allows people to own one firearm per license, and gun owners must reapply and requalify for their license every three years. The minimum age to own a gun is 18, although there are exceptions for sport shooters older than 14.

Japan does not guarantee the right to privately own a gun. Only a handful of countries — including the United States — provide their citizens a constitutional right to keep and bear arms. 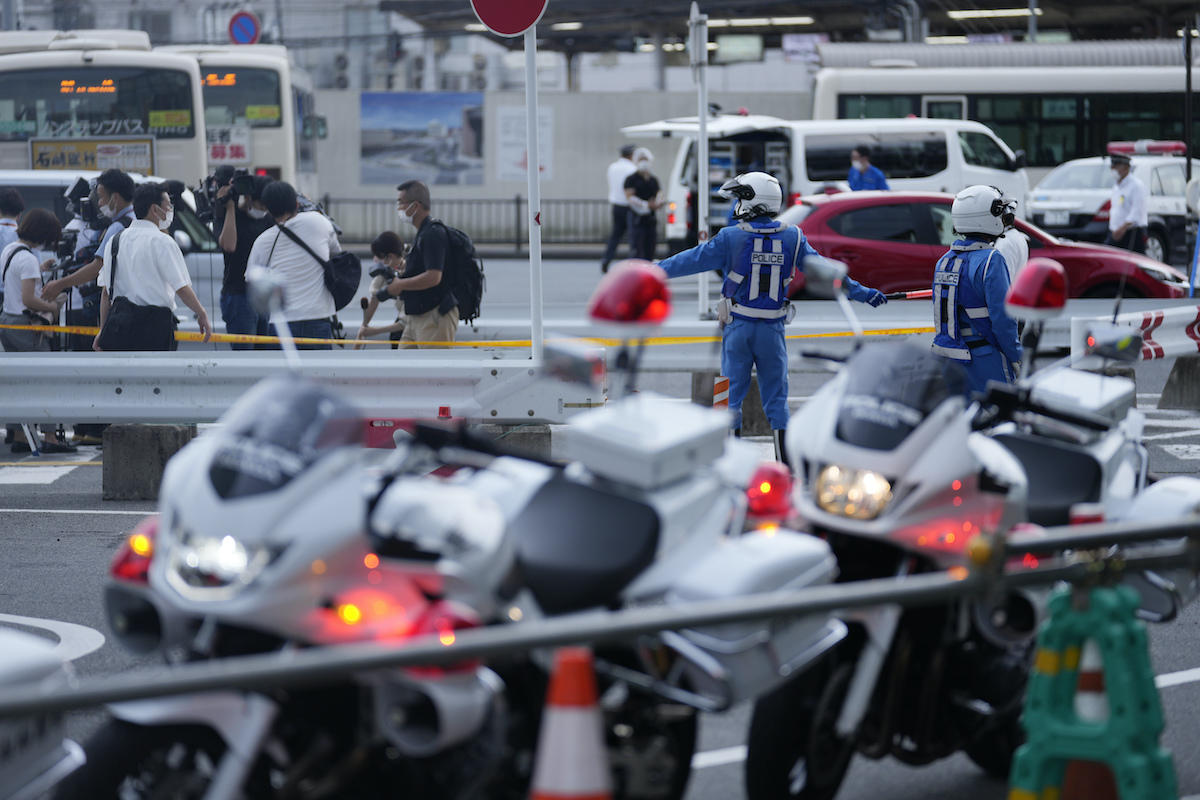 Nara Police officers direct pedestrians and traffic near the scene, back left, where the former Prime Minister Shinzo Abe was shot while delivering his speech to support the Liberal Democratic Party's candidate during an election campaign in Nara, Friday, July 8, 2022. (AP)

How did the suspect in Abe’s shooting skirt Japan’s gun laws?

Japanese police described the handmade gun as being 40-by-20 centimeters (roughly 16 inches-by-8 inches). In an article that quoted Matthew Moss, a U.K.-based small arms specialist and historian, The Japan Times said weapons experts told the publication that the gun was constructed with "readily available commercial items," including wood, metal pipes, electrical tape, batteries and wiring. No parts of the gun appeared to be 3D-printed, the story said.

More handmade guns similar to the one used to kill Abe were found at the shooter’s home, The Japan Times reported. PolitiFact reached out to Japanese police for comment, but did not hear back.

"The fact that the assassin used a handmade gun speaks to the successful gun control (of conventional guns) in Japan," Kiyoteru Tsutsui, a Japanese studies professor at Stanford University, told PolitiFact.

However, Tsutsui also expressed concern that this shooting could prompt copycat incidents in which other perpetrators try to use handmade guns. The 41-year-old suspect who shot Abe served in the Japan Maritime Self-Defense Force and had some experience with guns, according to reporting in The Japan Times.

"Japan has been a successful case for gun control, but democratization of special skills, including skills to make guns, has changed the dynamic, and we might have to worry about more gun violence in Japan," said Tsutsui, who also directs the Japan Program at Stanford University’s Shorenstein Asia-Pacific Research Center.

Suzuki said that because gun control is already strict in Japan, the policy conversations following Abe’s assassination have focused mostly on enhancing security for politicians.

The head law enforcement officer in Nara, Japan, where the shooting occurred, acknowledged flaws in Abe’s security protocol and said these issues will be investigated, The Washington Post reported. It’s unclear how many security personnel were present at the campaign event where Abe was shot.

How often does gun violence occur in Japan?

Although there is concern about handmade firearms proliferating, gun violence overall is rare in Japan. The National Police Agency counted 10 shootings in 2021, eight of which were linked to the yakuza, the Japanese criminal network. These instances resulted in one death and four injuries. Since 2017, police have reported 14 gun-related deaths in Japan. It’s unclear whether the police’s data includes gun-related suicides and accidents.

GunPolicy.org, an international gun laws and violence tracker run by the University of Sydney, counted 32 gun deaths, including suicides and accidents, in Japan from 2017 to 2018. GunPolicy.org derives its data from the World Health Organization Mortality Database, which says its data can often differ from law enforcement reports due to different definitions and reporting methods.

Because firearms are strictly regulated in Japan, the number of civilians who own guns is low. The latest Small Arms Survey data, from 2018, estimated that in 2017 there were 377,000 civilian firearms in Japan, which has a population of about 126 million people.

Growing up in Japan, Suzuki said she only ever saw police carry guns, and even then officers rarely used them.

"There’s just not a gun culture at all in Japan," she said. "It’s just not part of our life."

By comparison, the Small Arms Survey estimated there were about 1.2 civilian firearms per person in the U.S. — the world’s highest rate of civilian gun ownership, according to that data.

"Japanese people generally see guns as incredibly dangerous, and see no reason why any civilian should ever need to own a gun, except possibly hunters," Kapur said.

The New York Times, "Are Japan’s gun laws a success or failure after Abe shooting?," July 9, 2022

The Washington Post, "Japan reels after assassination of Shinzo Abe, as investigation into gunman, security begins,"