CNN
stated on February 18, 2015 in a graphic on CNN Newsroom:
"ISIS lures women with kittens, nutella."

CNN aired this graphic to preview a discussion of why women would join the fight with ISIS on Feb. 18, 2015.

Find a goofy still frame of television, and people will propel it across the Internet. CNN got a taste of this law of social media on Wednesday after airing a silly-looking graphic about a serious topic: the Islamic State’s recruitment of female fighters.

The anchor’s set-up of the segment did little to help viewers take it seriously.

"ISIS is talking online about jars of Nutella, pictures of kittens and emojis," CNN Newsroom host Carol Costello said in the Feb. 18, 2015, segment. "These three images are in part helping ISIS recruiters lure westerners into their fight because they want people to believe their life on the battlefield isn't so different than yours. They actually eat Nutella, and I guess they have pet kittens."

As she spoke, a highly sharable graphic depicting a jar of the chocolate hazelnut spread, two orange tabby kittens and a silly face from the emoji keyboard appeared with script (a chyron in TV talk) that said "ISIS LURES WOMEN WITH KITTENS, NUTELLA".

Costello went on to interview Nimmi Gowrinathan, an academic who studies women in crisis and a visiting professor at the Colin Powell Center for Civic and Global Leadership at City College, New York. The words "Nutella," "kittens" or "emoji" were not part of their discussion.

Instead Gowrinathan talked about how the discussion of female Islamic State fighters (also called ISIS or ISIL) should focus on the larger political suppression that pushes women to join these kind of movements rather than looking at what may have triggered one woman’s turning point to extremism.

But her more nuanced discussion wasn’t the takeaway. Instead the blogosphere ranks of Jezebel, New York Magazine’s Daily Intel, and, most angrily, Vox dinged CNN for suggesting women could be easily "lured" into ISIS with guilty, silly pleasures.

As fact-checkers, we felt beckoned to sort out the confusion. Was CNN’s segment just plain weird or onto something?

CNN did not return emails and calls for comment. We went to experts who track jihadist groups, including ISIS, on social media.

"The way that the CNN story was framed was kind of funny and eyeroll-inducing," said Daveed Gartenstein-Ross, a senior fellow at the Foundation for Defense of Democracies, "but it’s largely correct."

The online prowess of the Islamic State is a well-documented strength of the movement. From videos to online forums to journals to various social media websites, supporters disseminate propaganda messages (90,000 a day) that are more slickly produced and reach wider audiences than efforts from other terrorist groups (think of al-Qaida home videos showing Osama bin Laden speaking into the camera with little other detail).

ISIS even has plans for a 24-hour propaganda network, said Daniel Cohen, a research fellow and coordinator of the cyber security program at Tel Aviv University’s Institute for National Security Studies.

The videos or posts are often translated into multiple languages so that demographic groups can be more effectively targeted around the world. Some of the imagery depicts a fulfilling life in a dream state ruled by sharia law, where kids are cheerful and ISIS recruits offer humanitarian aid in war zones.

And yes, the group’s supporters also speak in emojis, tweet pictures of themselves unwinding with Nutella and run Twitter accounts like @ISILCats showing jihadists cuddling with kittens and kittens cuddling with firearms. It’s all part of an effort to speak the same cultural language as potential recruits so that they don’t think life with the Islamic State is all beheadings and burnings, Cohen said.

"Most of the people sharing this content on social media came from Western culture," Cohen said.

It makes them seem relatable and charismatic, said Gartenstein-Ross, adding that it’s nothing new for ISIS.

Richard Brennan, a Middle East expert at the RAND Institute, said the ISIS campaign "is much more sophisticated" than what was portrayed on CNN.

"It’s targeting the young men and women who want to be part of something greater than themselves to accept this movement for the validity that they believe the Koran is teaching," he said.

Obviously, not all of the tweets, videos and images are cheery (the beheadings of prisoners, for instance). Other viral memes are designed to show how "disgusting" their enemies are by showing dead children’s bodies from bombs or airstrikes.

The point is, the use of familiar western imagery in social media messages is just one tool in the Islamic State’s vast marketing toolbox, and the real motivations for someone joining the fight run much deeper.

Those motivations are connected to the pursuit of identity and purpose.

Some of the women recruited by ISIS act as internal police within their territories to make sure people are adhering to sharia law and stopping women who are not dressed appropriately, Cohen said. They also play a big role in online recruitment efforts.

In an August article for Foreign Affairs, Gowrinathan criticized experts for being so perplexed by the formation of all-women brigades within ISIS. Women in war zones, she wrote, typically don’t have a role in the politics of their society and are drawn to extremism when they cannot air their grievances in the open. Still, some are coerced into joining and do so for their own safety.

The audience for the communications with kittens and Nutella is a slim component of the majority of Sunni Islamic women who are joining ISIS from countries around the region out of oppression in their home state, she said in an interview with PunditFact.

And even for the westerners, a life promising time with cute kitties and tasty sweets "won’t ever be enough of an effective recruitment tool for any group."

"The kittens and emoticon thing is most damaging because it denies women any political agency," she said. "It infantilizes them in a way that you would assume they would be drawn to this for the most superficial reasons."

For the record, Gowrinathan said she wasn’t brought on CNN to talk nutella and cats, nor was she pleased with the attention CNN producers brought to the popular hazelnut spread, winky faces and baby cats.

"All I tried to point out is we dismiss women’s politics all the time," Gowrinathan said.

Costello eventually deleted a tweet (which we captured below) promoting the segment with a video of the interview. 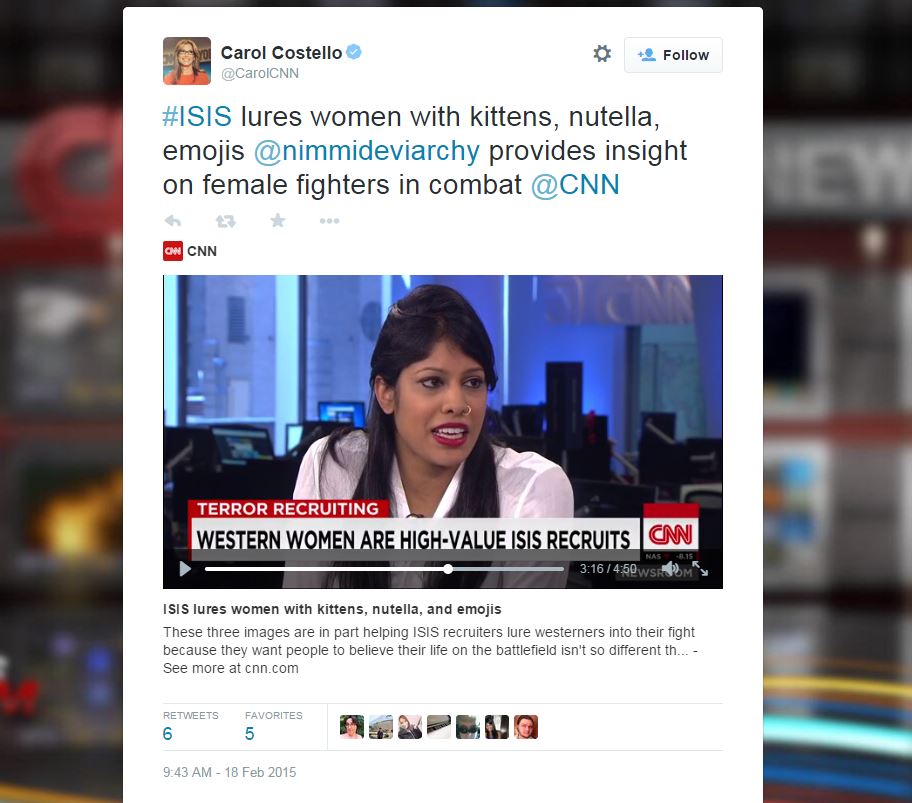 And Gowrinathan tweeted that she did not, for the record, believe "emoticons are relevant in recruitment of #women to #isis."

This fact-check is a case study of what can go wrong when a news channel sacrifices nuance for an eye-catching graphic.

On CNN, that graphic said, "ISIS LURES WOMEN WITH KITTENS, NUTELLA." There wasn’t much more to Costello’s introduction of the segment, but she did reference images of nutella, kittens and emojis that are used "in part" to recruit westerners. Costello’s words are technically accurate, but CNN’s click-baity graphic is incomplete and misleading.

In reality, ISIS is using a vast array of tactics to persuade people to give up their lives for their fight. No expert would say that someone would join ISIS for the reasons isolated on CNN. To boil down ISIS’ recruitment strategy of women to nutella, emojis and kittens is a vast oversimplification that borders on the absurd.

There is a shred of truth to this claim but not much beyond that. We rate it Mostly False.

Interview with Richard Brennan, a Middle East expert at the RAND Institute, Feb. 18, 2015