Put this in the category of amazing but true.

A video of a man flying over canyons and desert with some sort of jet-powered hoverboard strapped to his feet has whipped up disbelief on the internet. Many people suspect an artful hoax, but in truth, it’s the real deal. 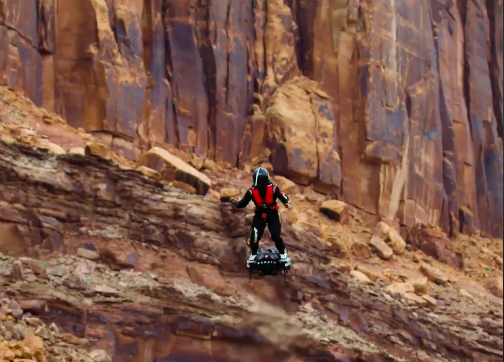 Franky Zapata flies past a rock face in a video posted on Facebook. (Screenshot)

The video posted on Facebook shows Franky Zapata, French jet ski champion and creator of the Flyboard Air, zipping around on small turbine jet engines, pirouetting over scrub brush, and chasing down a passing freight train. The Zapata Racing website offers a variety of models, including the Flyboard Air Exp, with six small engines, and the Flyboard Air UI, designed for the American ultralight market.

Under the FAQs, Zapata’s company said his device can reach a speed of 140 km per hour, or about 87 miles per hour and a flight can last from six to 10 minutes. Zapata has taken it up to 150 meters (nearly 500 feet) and believes he could go higher.

Despite the claim that this is "very easy to learn," there’s some disappointing news for would-be buyers: The site says that right now, "only Franky Zapata can pilot the Flyboard Air."

The Guinness Book of World Records awarded Zapata the record for the world’s farthest hoverboard flight in 2016. Zapata flew for well over a mile (7,388 feet to be exact) along the coast of Sausset-les-Pins in the south of France.

"Rising 50 metres above the surface for the attempt and trailed by a fleet of boats and jet skis, Franky, 37, piloted a futuristic aircraft called the Flyboard® Air developed by his company Zapata Racing," the record-tracking publication said.

The company also has video of Zapata waving to the crowd far below at the 2018 Grand Prix in France. 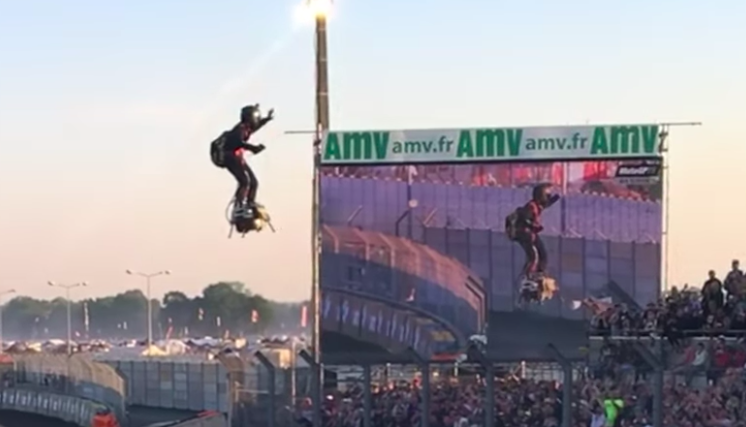 The one off-beat note in the Facebook post is the headline. It said Zapata was going over 103 miles per hour, which is faster than the company says is possible.

Which hardly seems to matter as he whizzes past.

A video on Facebook showed a man flying while standing on a small device, ostensibly at over 103 miles per hour.

He did, though not quite as fast as the headline claimed.

Snopes, Did This Man Fly Through the Air with a Jet-Powered Hoverboard Strapped to His Feet?, July 25, 2018