Leaders for a Better Community
stated on March 25, 2020 in a flier:
Says Deputy Comptroller Aycha Sawa "blocked an audit" of the Milwaukee lead program for three years that "put our children in danger" and spurred a criminal investigation.

Margaret Howlett, Milwaukee, who has a 4 year-old and a 13 year-old, chats about ways to minimize exposure to lead in water supplies to her home during an April 2019 event. (Rick Wood/Milwaukee Journal Sentinel)

In an election season already historically bizarre due to the coronavirus pandemic, of course we have a down-and-dirty race for a position in city finance.

The normally low-profile Milwaukee comptroller post, held since 2012 by the retiring Martin Matson, is up for grabs, pursued by Deputy Comptroller Aycha Sawa and state Assembly Democrat Jason Fields.

The comptroller is the city’s chief financial officer, but a series of ads from a dark-money group backing Fields have made this a race about lead pipes.

The specifics of the claim vary by ad, but one mailer sent to various homes in Milwaukee summed up the core of the attacks on Sawa. The flier, funded by the Leaders for a Better Community, says this:

"For three years, Deputy Comptroller Aycha Sawa and the Milwaukee Comptroller’s office blocked an audit of Milwaukee’s lead abatement programs. This put our children in danger. Her inaction has even led to a criminal investigation."

Let’s be clear up front — that is a wild exaggeration at every turn.

Leaders for a Better Community is a politically active nonprofit that doesn’t have to disclose the source of its funds. The supposed "issue ad" directs readers to call a number at the comptroller’s office (a number no longer in use) or visit the group’s website for more information on their plan for transparency and accountability (no such plan is posted).

The group was founded in 2015 and previously supported Fields in a 2016 run for state Assembly, according to the Wisconsin Democracy Campaign. It is run by Sherwin Hughes, a long-time friend of Fields. Fields referred to Hughes in a March 8, 2020, Facebook post as "our guy, our friend, my brother, an advisor."

The race pits Fields against Sawa, who has worked in the office she now seeks to run since 2010, working her way up from auditor to lead auditor, audit manager, accounting director and now deputy comptroller.

Fields served in the state Assembly from 2005-13, and now again since 2017. He has also worked as a stockbroker and runs several local organizations. A February 2020 Milwaukee Journal Sentinel story noted he is seeking the city’s top finance job despite a background that includes a bankruptcy in 2016 and drunken driving convictions from 2008 and 2014.

The ad campaign ignores those backgrounds and focuses on the city’s lead abatement program. 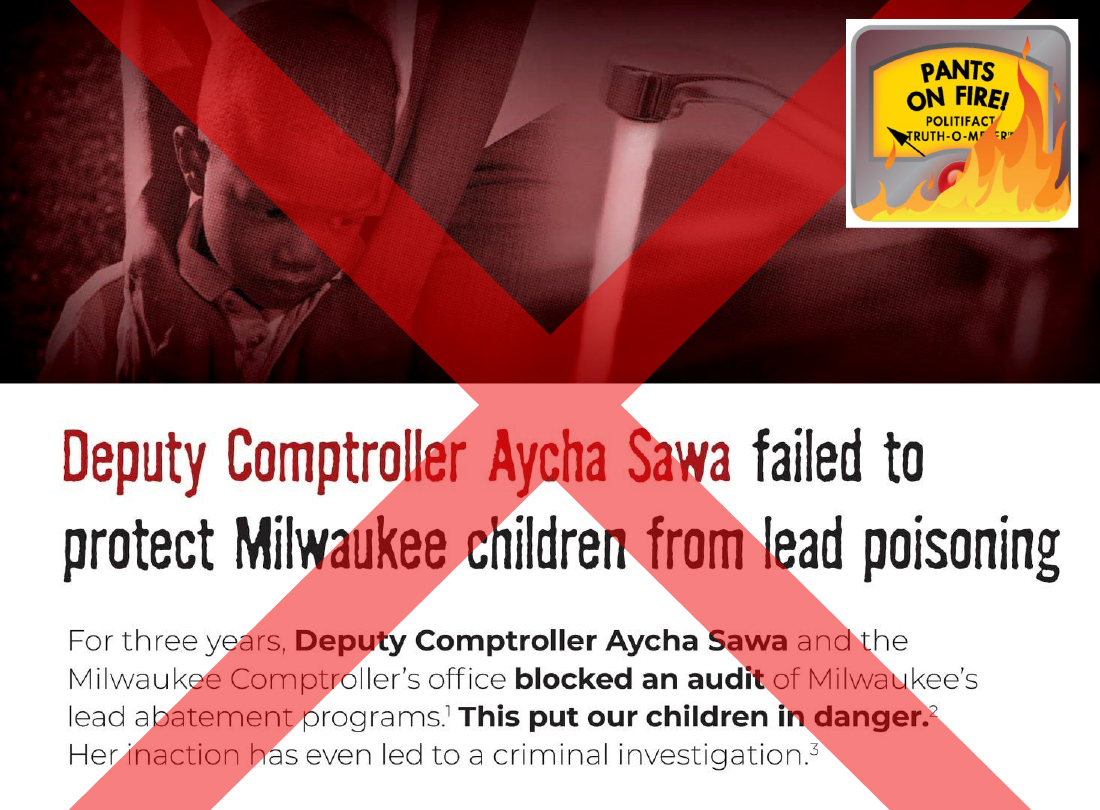 The program, run by the Milwaukee Health Department, is the subject of an outside audit and was condemned in a state report from 2018 that found more than 90% of cases were closed before the amount of lead in a childs' blood had dropped to levels deemed safe by the state, among numerous other failings.

So let’s get back to the ad.

As evidence of its multiple claims, the mailer lists four sources in footnotes:

None of these prove the claims in any way.

In an email to PolitiFact Wisconsin, Hughes provided no additional direct evidence, stating simply: "The city of Milwaukee had been requesting lead abatement audit for years. Per the current comptroller, Sawa was in charge of audit division."

That response is just as misleading as the mailer itself.

Here’s the reality behind the mailer’s claims.

"For three years…blocked an audit of Milwaukee lead abatement"

Hughes did not respond to a question asking what three-year window this referred to.

But another flier references this in the present tense, saying the office "has refused for three years," so we’ll work from the assumption it is a 2017 to 2020 window.

Matson, the current comptroller, said in a phone interview an audit of the lead program was never on the table before the rampant lead issues around the city began coming to light in 2016 and 2017.

By the time lead concerns in Milwaukee became more public, Sawa was no longer in charge of the audit division. She held that position from 2012 until February 2015, when she was promoted to accounting director, Matson said.

Even the behind-the-scenes memos where city officials discussed issues with the lead program were just starting to circulate in early 2015.

"That was an outright lie," Matson, who has endorsed Sawa, said of the blocking claim.

Then there’s this key detail: An audit has in fact taken place, conducted by an outside agency, and it was recently completed.

"Put our children in danger"

It’s absurd to attribute this to Sawa, who at the time lead concerns were raised was the accounting director. Her job there was "assuring the accuracy of the city’s financial statements," her biography says.

"Her inaction has even led to a criminal investigation"

This is flat-out ridiculous. The criminal investigation connected to the lead testing is of the health department, not the comptroller’s office.

The investigation came after former health commissioner Bevan Baker was forced from his job in January 2018, and a number of other staffers were disciplined, forced to resign or fired.

There was never a criminal probe into Sawa or the comptroller’s office.

The actual audit involved has yet to be released to the public, though Matson said a copy of the findings have been submitted to the city.

In January 2018, the Common Council directed the city clerk to audit all Health Department programs within 90 days, as lead concerns grew. Matson said he objected at the time, arguing this was both not humanly possible and that only a few organizations around the country were qualified to audit a lead abatement program, so the council rescinded the request and asked the comptroller’s office to seek an outside audit.

The city eventually reached an agreement in February 2019 for an audit by the Public Health Foundation, a nonprofit organization based in Washington, D.C., and it began work in May 2019.

A flier attacking Sawa says she "blocked an audit" of the city’s lead abatement program for three years that "put our children in danger" and spurred a criminal investigation.

But Sawa’s oversight of city audits ended in 2015, well before any concerns with the city’s lead testing program publicly came to light. And in any case, there was never any suggested or proposed audit brought forward that she could block.

Implying she continued blocking something for a three-year span is pure fiction — as is the claim that her actions spurred a criminal investigation. The investigation was of the health department, not Sawa or the comptroller’s office.

And, of course, an audit has in fact been done.

We rate this false and ridiculous claim Pants on Fire.

Leaders for a Better Community, flier, distributed in March 2020

Leaders for a Better Community, flier, distributed in March 2020

Milwaukee Journal Sentinel, Bice: Candidate for city's top finance post says he is on 'comeback' from bankruptcy and OWI, Feb. 17, 2020

WUWM, What Milwaukee's Lead Problem Means For Children, May 7, 2019