In late March, several senators faced angry questions about stock sales they made in the days following an intelligence briefing on the coronavirus, and before spreading panic over the virus pummeled U.S. markets. Now there are suspicions online that certain powerful people were tipped off to the threat of the coronavirus in time to protect their finances.

One Facebook post claims that after being tipped off by government officials, the chief executive officers of more than 14 major companies resigned in order to be able to sell stocks they owned. 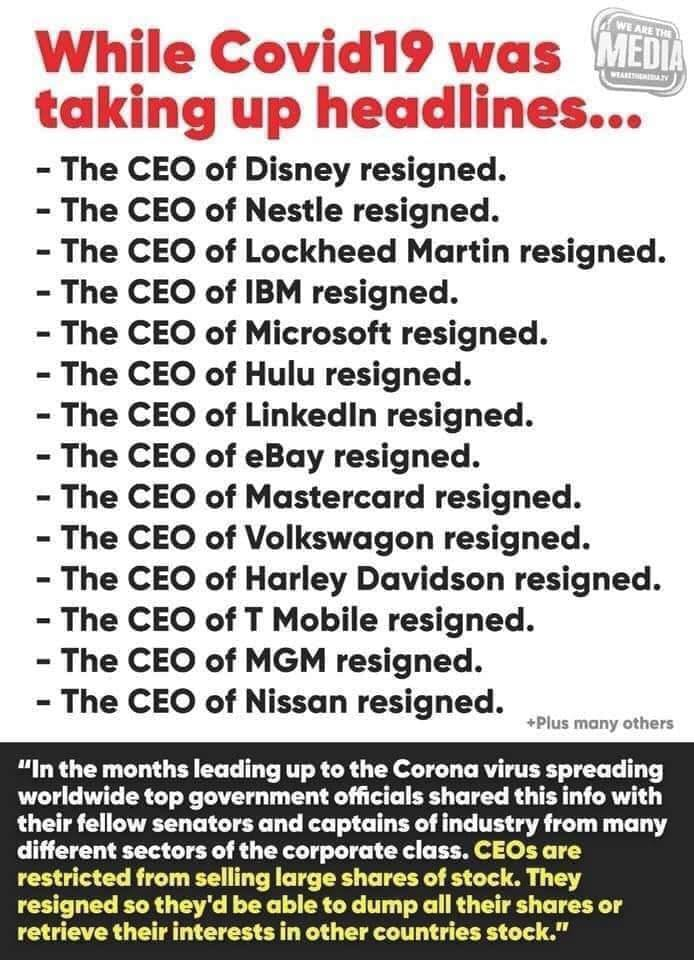 Among those listed, we did find two examples of departing CEOs selling company stock, but that was after the outbreak was publicly known, and both were still with their companies. There’s no evidence of any coordinated effort by government officials to give 14 CEOs advance information about the coronavirus that they could use for personal profit.

CEOs can depart for any number of reasons, including normal succession planning, or moves by the board to shake up leadership. CEOs and companies don’t always go public with all the reasons behind such departures.

A public company is required by the Securities and Exchange Commission to explain a CEO’s departure only if the CEO resigned because of a disagreement with the company over operations, policies or practices, or if the CEO was removed for cause, said Douglas Chia, president of Soundboard Governance, a corporate governance consulting firm, and a fellow at Rutgers University’s Center for Corporate Law and Governance. Such rules are in place to protect investors’ rights.

To deter insider trading, CEOs, other senior executives and board members are generally restricted from trading in their own company's stock, except during designated trading windows, Chia said. Those windows usually open in the two weeks immediately after the company’s quarterly earnings report is released. The trades must be cleared with a company’s legal department and reported within two days to the SEC, Chia said.

Overview of the 14 companies cited

The COVID-19 disease can be traced back to Dec. 31, when the government in Wuhan, China, confirmed that health authorities were treating dozens of cases of pneumonia from an unknown cause. Eight days later, China identified it as a new type of coronavirus. The first coronavirus case in the United States was confirmed on Jan. 21.

We found that of the 14 companies listed in the post, only two had corporate CEOs who resigned their posts — and actually left their companies — after the coronavirus surfaced in China.

Another two CEOs sold company stock after the outbreak. At the time of the sales, however, the outbreak was already publicly known, and the CEOs hadn’t yet left their companies.

We found no evidence the CEOs received advance information about the coronavirus or that they left in order to be freed from regulations that restricted their ability to sell stock.

The 2 who left their companies

MGM’s announcement, the earlier of the two, came two weeks after the Trump administration suspended entry into the United States by any foreign nationals who had traveled to China in the previous 14 days.

About a month later, MGM closed its Las Vegas casinos because of the coronavirus, and Murren acquired 6,000 shares of MGM restricted stock units. On the day Murren’s purchase was disclosed, March 18, the stock price had dropped to $7.14.

But Murren was still CEO during both sets of stock transactions. He stepped down as CEO on March 22, the same day it was announced he would lead a state coronavirus task force formed by Nevada Gov. Steve Sisolak.

5 out as CEO, but still with company

Five CEOs stepped down from their positions, but were staying with their companies as executive chairman, a top leadership post that typically involves some day-to-day duties in addition to a seat on the board. Companies often say they want the former CEO to stay for a limited period of time to ensure a smooth transition to the new CEO, Chia said. CEOs who resigned but stayed on as executive chairman were still under restrictions for trading in their company’s stock.

3 left before the outbreak

Three of the CEOs cited on the list left their posts or announced their departures before the coronavirus outbreak surfaced.

In a few cases, the CEO departures were long-planned, or at a subsidiary level, not at the parent company. And one purported CEO resignation wasn’t that at all.

Minow said it’s good that executives are required to disclose their personal sales of company stock so that their actions can be scrutinized. But she advocates for rules that would prohibit top executives from selling their company stock until three to five years after they’ve left the company. "We want them to be thinking long term up until the day they leave," she said.

A Facebook post claimed that CEOs of 14 large companies received advance information about the coronavirus and then resigned in order to be freed from restrictions on selling stock.

Among the companies listed, only two of the CEOs resigned after the coronavirus outbreak and left their companies. One sold a large amount of his company stock after his resignation was announced — but while he was still with the company, and well after the outbreak had made news. We found no evidence of any effort to give advance information to the 14 CEOs so that they use it to profit personally.

Reuters, "Partly false claim: The CEOs of these 19 companies stepped down during the Coronavirus outbreak," March 27, 2020

TruthOrFiction.com, "Did a Phalanx of Corporate Chief Executive Officers Step Down Ahead of COVID-19?" March 24, 2020

Email, John Coffee, professor of law and director of the Center on Corporate Governance at Columbia Law School, April 8, 2020

The Verge, "Hulu CEO steps down as Disney moves almost everything in house," Jan. 31, 2020

Georgia Gun Owners
stated on October 30, 2022 an ad:
"Raphael Warnock and Stacey Abrams are radical communists and, if they get their way, gun owners here in Georgia will be completely disarmed."

Liz Cheney
stated on October 28, 2022 an ad:
Kari Lake and Mark Finchem “have said that they will only honor the results of an election if they agree with it."

Club for Growth Action
stated on October 21, 2022 an ad:
Catherine Cortez Masto "was the deciding vote” to send COVID-19 stimulus checks to more than 1 million prisoners.

Catherine Cortez Masto
stated on October 5, 2022 an ad:
Says Adam Laxalt said it is “good news” that “a lot of those Hispanic small businesses never reopened” after the pandemic.