President Donald Trump recently said that House Speaker Nancy Pelosi needs to come back from "vacation," blaming her for a stalemate over a deal to add funds to the exhausted small business loan program, which ran out of money on April 16.

Posts on Facebook take the vacation claim further, and suggest that all Democrats are on vacation until May 4 and "refuse to come back" to sign a bill to replenish the program. 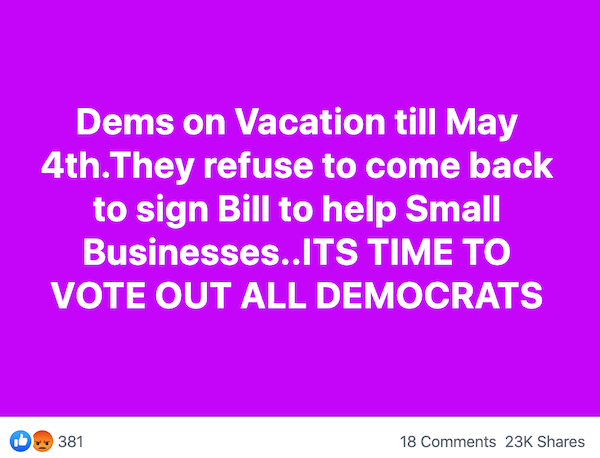 This is misleading. All of Congress, which includes House and Senate Republicans, are in recess to avoid spreading the coronavirus.

Congress announced it would extend its recess until May 4 to continue practicing social distancing and avoid transmitting the coronavirus.

"As the country continues working together to flatten the curve, following the advice of health experts, the full Senate is not expected to travel back to Washington D.C. sooner than Monday, May 4th," Senate Majority Leader Mitch McConnell, R-Ky., said in a statement on April 14. "All members will receive at least 24 hours’ notice if this changes. This bipartisan decision reflects consultation with Leader Schumer and my colleagues in Senate leadership."

House Majority Leader Steny Hoyer made a similar announcement April 13, saying that absent an emergency, the "House is not expected to meet prior to Monday, May 4, 2020."

Senate leaders announced on April 21 that the two parties reached a deal for another relief package. The legislation could be approved by unanimous consent, which does not require a majority of members to be present.

But Democrats have not refused to come back from "vacation." Both the Senate and the House are in recess until May 4 to avoid spreading the coronavirus. The decision was made by congressional leadership. This post rates False.