Viral image
stated on August 5, 2021 in a viral image:
Says there are fewer than 2,000 confirmed COVID-19 hospitalizations in the U.S.

A conservative group that focuses on exposing what it describes as leftist bias in the news media misled its Facebook audience by claiming that fewer than 2,000 people are currently hospitalized in the United States with COVID-19.

The post is from the Media Research Center, which runs the website Newsbusters.org. The post includes an image, which starts with "Should this induce media panic?": 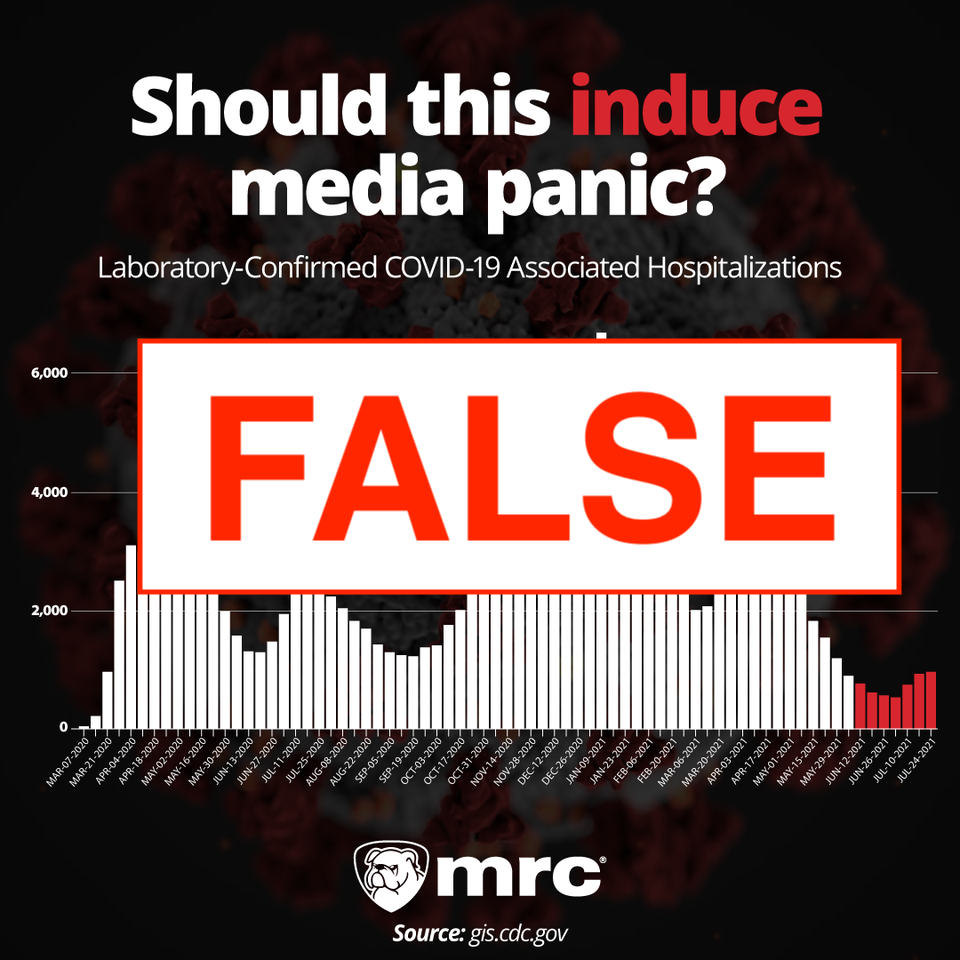 "What the media aren't showing you: COVID hospitalizations have decreased dramatically since last summer," wrote the Media Research Center, which has nearly 1.8 million Facebook followers.

The chart cites the federal Centers for Disease Control and Prevention as its data source.

And while the Media Research Center copied the CDC data accurately, it failed to include a very important CDC-issued disclaimer.

The data in the post is drawn from just 14 states — a pool that accounts for less than 10% of the U.S. population. It includes no data from states where cases have spiked, such as Florida, Louisiana or Texas.

Let’s look at Florida by itself.

The seven-day average of new hospital admissions with confirmed COVID-19 was 1,936 for July 31 to Aug. 6 — a 29.7% increase from the previous week, according to the CDC.

The number of hospitalizations is a record for the pandemic, according to the Miami Herald, which relied on data the state reports to the CDC.

In Texas, more than 8,100 people were hospitalized as of Aug. 4, according to the Texas Tribune, which relies on data from the Texas Department of State Health Services.

More than one-third of new COVID-19 hospitalizations came from Florida and Texas, according to the White House. None of that data is accounted for in the Media Research Center chart.

So what is that CDC data?

According to the CDC, it represents The Coronavirus Disease 2019-Associated Hospitalization Surveillance Network (COVID-NET).

The Emerging Infections Programs is a "collaboration between CDC and 10 state health departments working with academic partners to conduct active population-based surveillance and special studies for several emerging infectious diseases with special emphasis on infectious diseases related to the key EIP activities."

The bottom line: It’s a snapshot of some data. But it’s not what the Media Research Center described.

The CDC’s COVID tracker says the current seven-day average of people hospitalized with COVID-19 sits at 50,502. And the CDC notes that because of reporting delays, that figure should be repeated with caution.

A chart from the Media Research Center claims there are less than 2,000 confirmed COVID-19 hospitalizations.

The group looked at a sampling of data from 14 states. But that data includes only 10% of the U.S. population and not states like Florida and Texas, where more than 20,000 people are hospitalized alone.