Facebook posts
stated on May 29, 2021 in a Facebook post:
The New York Times published an old stock photo of a young girl and claimed Israeli forces killed her during its recent war with Hamas.

On May 28, the New York Times published a print article that featured a front-page collage of images of the children who were killed.

But a recent post by a Facebook page called "Stop Antisemitism" claims there’s a discrepancy with one of the images, and alleges that the newspaper used an outdated stock photo to represent one of the children.

The social media post includes an image of the Times’ front page with a red line drawn from one of the images in the collage —  a photo of a smiling young girl with dark hair — to a screenshot of the same image in a social media post from 2017. "Apparently we ‘killed’ her twice," a caption reads. A separate image included in the post shows screenshots of web search results that bring up the same photo on Pinterest, an image-sharing platform. 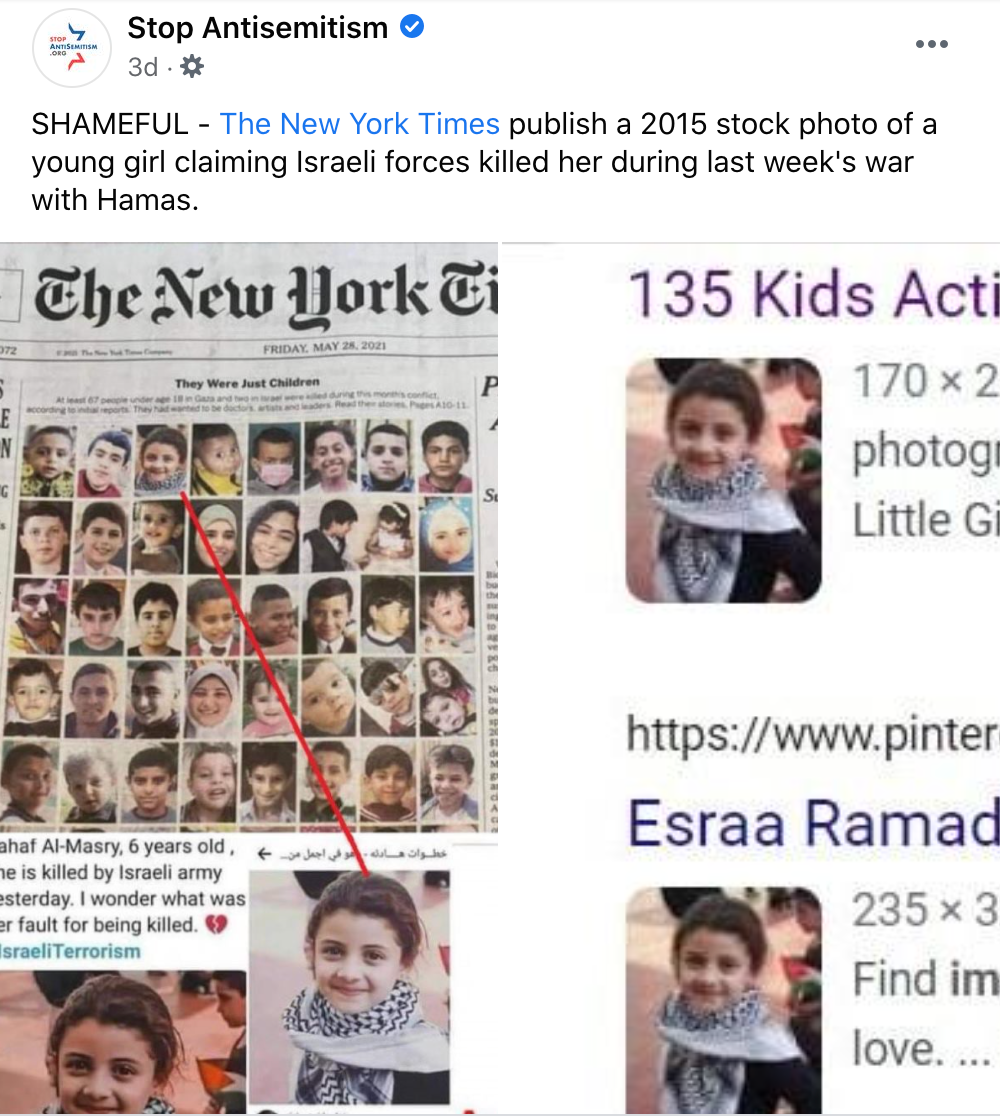 (Screengrab from Facebook)
A PolitiFact reader who saw the claim on social media asked us to look into it. The post was also flagged as part of Facebook’s efforts to combat false news and misinformation on its News Feed. (Read more about our partnership with Facebook.)
The claim is rooted in actual events — the wrong photo was used to identify a child who was killed in the conflict — but there’s no indication the photo error was made in an effort to deceive.
The New York Times erroneously identified the child in the photo as 10-year-old Rahaf al-Masri, who was killed in an Israeli airstrike around May 10 in Beit Hanoun, Gaza, along with her three young cousins.
In fact, the child in the photo is a girl named Salma, according to photographer Maiar Abu Shalback. Shalback said she photographed the child in October 2015 at Al-Awael School in the Palestinian city of Ramallah. Salma is alive and in good health, Shalback said.
The New York Times issued corrections over the use of the photo. In the online interactive version of the piece published May 26, the correction said:
"A picture with an earlier version of this article was published in error. The child in the photograph was not Rahaf al-Masri. It has been replaced by a photograph supplied by Rahaf’s family."
"The photo mistake was due to human error and it was fixed as soon as we became aware of it," Danielle Rhoades Ha, a spokesperson for the Times, told PolitiFact in an email.
She said that editors attempted to publish the correction online around 1:30 p.m. ET on May 29, but a technical glitch with the interactive format prevented it from appearing online. It was re-attached to the online presentation on May 31. The correction appeared in print on June 1.
The error was not confined to the New York Times. Several social media accounts have also been incorrectly identifying the girl in the photo as Al-Masri for weeks.
Shalback, the photographer, said it was unclear why the child in the photo had been repeatedly misidentified. Reuters looked into the evolution of the mistake and found that the miscaptioned photo was posted and widely shared on Twitter on May 11 before also being tweeted within 24 hours by a former Sunday Times journalist and a former deputy prime minister of Turkey.

And while the image can be found on Pinterest, that doesn’t necessarily mean it is a "stock image," as the post suggests. Stock images are generic photos and illustrations that people can license for creative use.
Our ruling

A Facebook post says the New York Times used a 2015 stock image of a young girl and claimed that Israeli forces killed her during recent conflicts.

While the photo appeared on some image-sharing services, it’s not necessarily a stock image.  The Times did mistakenly use an image of a different girl that was taken in the Palestinian territories in 2015 to identify Al-Masri.

The newspaper issued a correction about the photo in print and on its website, and replaced the inaccurate photo with an image of Al-Masri that was provided by her family.

The statement is accurate but needs clarification or additional information. We rate this Mostly True.

CORRECTION,  June 3, 2021: The claim we checked here was made on Facebook on May 29, 2021. An earlier version of this story included the wrong date.

Reuters, Fact Check-Rahaf al-Masri, 10, was killed in the recent Israel-Hamas conflict – but photo shared on social media is not the same girl, June 3, 2021