"As mayor, I will implement StPeteStat, based on the CitiStat model of statistics-driven accountability standards. Building on the city’s current Scorecard measures, StPeteStat will consist of regular meetings, during which my staff and I will meet with department heads to examine and analyze past performance, future performance objectives, and overall performance strategies."

Following the leads of some major cities, Mayor Rick Kriseman helped launch the test version of a tool aimed to measure how well St. Petersburg's resources are being allocated.

The tool is a government accountability and management application that organizes statistical data gathered about a number of issues — crime, government workers' pay, even garbage collection. The goal is for city officials to use the data to identify specific problems and find solutions.

Many cities use a form of the program called CompStat (or Computer Statistics), a management model first used by New York City police under Mayor Rudy Giuliani.

When we last looked at this promise in 2015, the City Council approved funding to hire a coordinator to run the system, but the actual tool had not been developed. That changed in March 2017 when the city launched a beta version of a program known as Citizen Connect, which can be found at http://stat.stpete.org. 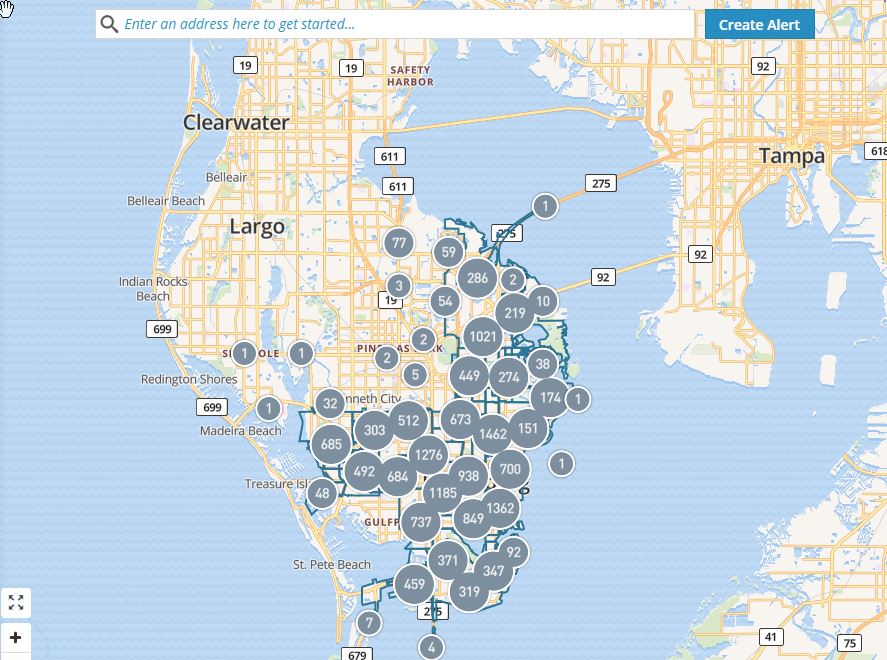 The interactive application shows residents a map of St. Petersburg with pins that mark particular problems or complaints throughout the city, including repairs (graffiti, potholes), calls to police and unsolved crimes.

The application allows users to search by a specific time frame or address and gives the option to filter results by the specific issue. There have been a little more than 16,000 total pins in St. Petersburg since the beginning of November. Almost 14,000 have been calls to the police.

Debbie Volk, the StPeteStat Analyst who was hired in 2017, said the official launch of the program should happen in the next couple of weeks.

During his re-election campaign, Kriseman reaffirmed his commitment to the tool and promised to integrate StPeteStat into every city department to ensure performance isn't just being measured, but managed.

Volk said she has been working closely with departments on outlining how they use StPeteStat and said the city will start meetings in December to discuss the system's efficiencies and challenges.

"This information will be used in regular reviews and drive the staff towards established goals," Volk said.

Former Mayor Rick Baker criticized Kriseman during the campaign for taking taking down the City Scorecard — a tool started by Baker to measure the city's success in managing certain aspects of the city.

But according to Kriseman, StPeteStat is his way of continuing Baker's program.

"Building on the city's current Scorecard measures, StPeteStat will consist of regular meetings, during which my staff and I will meet with department heads to examine and analyze past performance, future performance objectives, and overall performance strategies," Kriseman said in 2013.

Kriseman promised to implement StPeteStat. The city has yet to implement the final version of the tool, but has taken several steps to get the city closer to its goal. Until the official tool is launched, we rate this promise In the Works.

Rick Kriseman wants to use a statistical management method to measure how well St. Petersburg's resources are being allocated, and the City Council has agreed to let him hire someone to wrangle the project.

Since his 2013 campaign, Kriseman has proposed implementing StPeteStat, a version of a government accountability and management model used by several cities.

The method uses statistical data gathered about any number of issues — crime, government workers' pay, even garbage collection — and uses it in committees dedicated to finding solutions to specific problems.

Many cities use a form of the program called CompStat (or Computer Statistics), a management model used by New York City police under Mayor Rudy Giuliani. Other cities like Washington, Philadelphia and Los Angeles also use CompStat.

Former Baltimore Mayor Martin O'Malley used a version called CitiStat after he started his term in 1999. O'Malley, currently a Democratic presidential candidate, considered the program so successful he implemented a version for all of Maryland called StateStat once he was elected governor in 2007, to mixed results.

"Our stat program will not necessarily be based on any one city, but Baltimore's is certainly one model we have looked at," Kriseman communications director Ben Kirby said. "We will figure out what works best for our government."

While some of the data was already being collected through city departments and the Mayor's Action Center, it now looks as if StPeteStat is coming to St. Petersburg in earnest. The 2016 fiscal budget, which was passed by City Council on Sept. 17, 2015, includes $75,000 for a StPeteStat coordinator.

"This position will closely work with the administration to move our organization from simply tracking and reporting key data points to using those data points to guide management decisions," the budget overview reads. "The evolution from performance measurement to management is critical to the city's vision and efficacy."

It appears that choosing a coordinator is a big decision. Back in Baltimore, current Mayor Stephanie Rawlings-Blake removed CitiStat Director Mark Grimes in August 2015 after the Baltimore Sun reported CitiStat had staffing problems, didn't publish required reports and canceled a third of its analytical meetings while doubling its budget to $1 million between 2011 and 2014.

The mayor's office said more information on implementing StPeteStat was forthcoming, now that the budget included money to hire a coordinator. While we wait for the program to get up and running, we rate this promise In The Works.

Center for American Progress, "The CitiStat Model: How Data-Driven Government Can Increase Efficiency and Effectiveness," April 2007