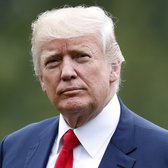 Donald Trump is the former president of the United States. He was elected the 45th president of the United States on Nov. 8, 2016.  He has been a real estate developer, entrepreneur and host of the NBC reality show, "The Apprentice." Trump's statements were awarded PolitiFact's 2015, 2017 and 2019 Lie of the Year. He received a bachelor's degree in economics from the Wharton School of the University of Pennsylvania.