At a rally in Columbus, Ohio, Donald Trump said he was in New York City on 9/11. That claim holds up, despite a 2004 Time magazine article to the contrary.

In recent days, some voices in the blogosphere have been toying with a potential blockbuster of a story -- that a Time magazine account from 2004 placed Donald Trump in Chicago on the day of the 9/11 attacks, not in Manhattan, as he has said on the campaign trail.

A reader asked us to look into this question, so we did -- and we discovered that Trump is right, and Time was wrong. He really was in New York during the attacks.

Let’s go back to the beginning.

Trump offered a specific account of where he was during the attacks during a rally in Columbus, Ohio, in November:

That conflicted with the opening of a 2004 Time magazine article by art and architecture writer Richard Lacayo:

"On the morning of Sept. 11, 2001, Adrian D. Smith, a well-known architect in the Chicago office of Skidmore Owings & Merrill, was in a meeting with Donald Trump. The hyperbolic New York City developer was in Chicago to go over the design of a proposed Trump residential tower in that city that he had decided should be — what else? — the tallest building in the world, around 2,000 ft. In the midst of their meeting, the two men got word of the first plane that hit the World Trade Center. ‘When the second plane hit, we all rushed to the television to see what was happening,’ says Smith. ‘That was the end of the meeting.’ "

Clearly, Trump couldn’t have been in two places at one time. So what happened?

When we contacted Lacayo, he acknowledged an error.

"I'm sorry to say, we were wrong and Trump is correct," Lacayo told PolitiFact. "I remember this problem. As I recall, the source of the problem was an ambiguous phrase in the reporting -- I wrote the story but didn't do all the reporting. Even our fact-checker didn't catch the error. So Trump is correct. He was in New York, not in Chicago, that day."

Lacayo added that he’s "pretty sure we did hear from Trump's people about the error" soon after the story came out, though he doesn’t think he was contacted personally. At publication time, Time was looking into posting a correction on on the archived article. (We did not hear back from Trump's campaign, Smith or a representative of Skidmore, Owings & Merrill.)

Further evidence that supports Trump’s account is a German news interview held near Ground Zero that was dated Sept. 13, 2001. (Image below) 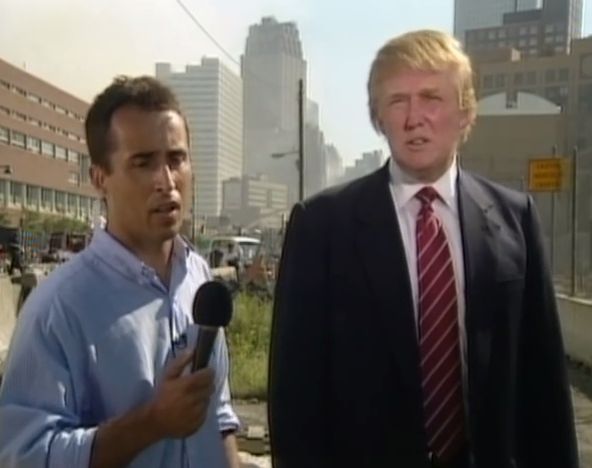 A possible explanation for the miscommunication appears in a 2002 article in 3:AM magazine by Charles Shaw, then a writer and editor in Chicago.

Adrian Smith recalls where he was on the morning of 9/11. In what can only be described as sickening irony, he was with representatives of Donald Trump, preparing to go live with a press conference to unveil his new design for Trump Chicago, a roughly 125 story, 2000 ft skyscraper that would have finally repossessed the controversial title of "World's Tallest Building" from the Petronas Towers in Kuala Lumpur, Malaysia. But rather than showing the world his beautiful new model, he instead stared at it and realized that it would never be built.

By email, Shaw told PolitiFact that he feels comfortable that Trump’s "people" were in Chicago that day but not Trump himself.

Shaw expressed some regret that the building Trump’s staffers were unveiling was never going to be built after the 9/11 attacks.

"It was a dark day for Chicago architecture, that was for sure," Shaw said. "The original design for Trump Chicago was beautiful and elegant. It would have been the man's crowning achievement, of a decidedly different aesthetic than anything that previously bore his name." He added that Trump’s "romance with Skidmore, Owings & Merrill was short and seemingly doomed from the start."

3:AM magazine, "Into the Great Wide Open -- the Uncertain Future and Undeniable Significance of Skyscrapers in Our Culture," 2002