A look at the data on domestic terrorism and who’s behind it
By Miriam Valverde August 16, 2017

A deadly attack in Charlottesville, Va., during a white nationalist rally and counterprotests brought attention to far-right terrorism and how it compares with radical Islamic terrorism.

After first criticizing actions on "many sides," Trump finally gave a full-throated condemnation two days later. The day after that, he said he thought "there is blame on both sides."

During the Aug. 12 protests, the driver of a Dodge Challenger drove into a crowd of people. Heather D. Heyer, 32, was killed and at least 19 others were injured, said a statement from the city government. Authorities charged a 20-year-old man from Ohio, James A. Fields Jr., with second-degree murder.

The attack met the legal definition of domestic terrorism, said Attorney General Jeff Sessions in an interview with ABC News.

After the Charlottesville events, we wondered about the latest numbers on domestic terrorism. How many attacks have there been, and who caused them?

Most of the attacks were carried out by far-right violent extremists. But more people died during attacks connected with Islamic jihadist extremists.

What a government report says about ‘violent extremism’

Perpetrators of violent extremism include white supremacists; anti-government groups; groups with extreme views on abortion, animal rights, the environment or federal ownership of public lands; and radical Islamist entities, such as the Islamic State of Iraq and Syria (ISIS).

The 9/11 terrorist attacks resulted in the largest number of deaths in the United States caused by violent extremism, the GAO report said. About 3,000 people were killed in the attacks.

• 106 individuals were killed by far-right violent extremists in 62 separate incidents;

• The number of people killed in a given year ranged from one to 49.

GAO noted that 41 percent of the deaths caused by a radical Islamist during the reviewed period happened in one incident: the 2016 Orlando nightclub shooting. In June 2016, Omar Mateen, born in the United States to Afghan parents, killed 49 people at Pulse nightclub in Orlando. 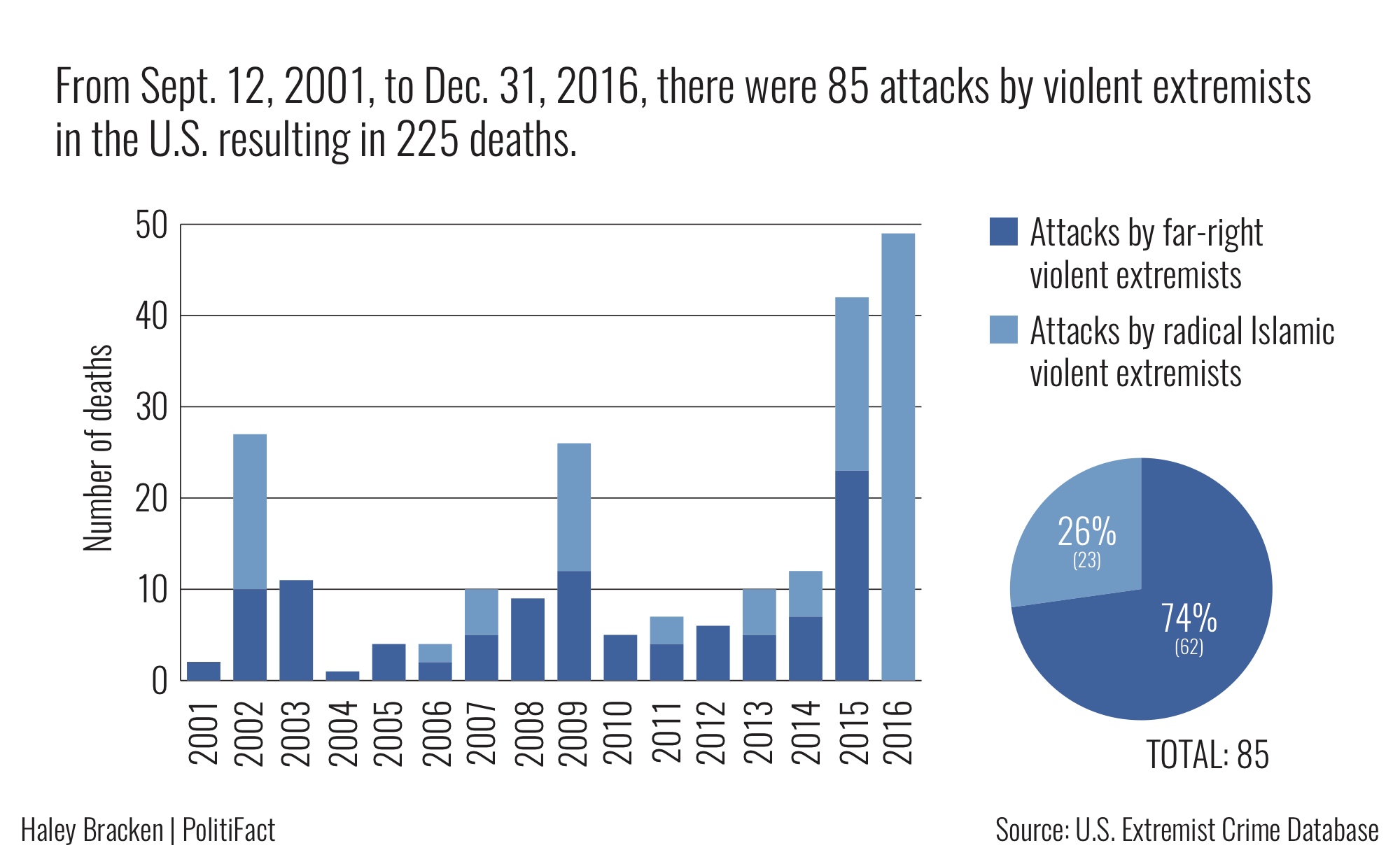 Other research on home-grown terrorism

The think tank New America has compiled information on terrorist activities in the United States after 9/11. It details data on deadly attacks by ideology up to the Aug. 12, 2017 Charlottesville attack.

Here’s their breakdown on the number of deaths caused by individuals of different ideologies: 95 by jihadist, 68 by far-right, and eight by black separatist/national/supremacist.

Even individuals who carry out jihadist attacks, however, are sometimes American citizens or longtime residents.

Of 418 individuals tracked by New America who are accused of jihadist terrorism related crimes in the United States since 9/11, 85 percent of them were either U.S. citizens or U.S. legal residents, and about half were born American citizens, Ford said.

Until the Orlando nightclub shooting, "the number of deaths caused by far-right-wing attacks outnumbered those caused by jihadism-related attacks," Ford said.

The task force’ efforts include research and analysis, outreach and engagement with communities, and intervention for individuals who "appear to be moving toward violent action." ​

PolitiFact, Trump misleads in claim about terrorism convictions since 9/11, March 2, 1017

New America, In Depth: Terrorism in America after 9/11, Part IV. What is the Threat to the United States Today? accessed Aug. 15, 2017