Kevin McCarthy
stated on May 12, 2021 in a statement to reporters:
"I don't think anybody is questioning the legitimacy of the presidential election."

After meeting with President Joe Biden about infrastructure, Rep. Kevin McCarthy, R-Calif., walked out of the White House and immediately faced questions about his ability to work with Biden.

A reporter asked McCarthy whether finding common ground with Biden would be complicated, since "you’re about to elevate someone to a leadership position who is still questioning the legitimacy of the 2020 election results."

The reference was to Rep. Elise Stefanik, R-N.Y., whom McCarthy had endorsed to be the next Republican conference chair, after Rep. Liz Cheney of Wyoming, who rejects former President Donald Trump’s false claims of election fraud, was forced out of the position by her fellow House Republicans.

McCarthy said it would be up to the Republican conference to decide on Cheney’s replacement. He added:

"I don't think anybody is questioning the legitimacy of the presidential election. I think that is all over with. We’re sitting here with the president today. So from that point of view, I don’t think that’s a problem."

(Republicans voted Stefanik to the leadership role on May 14.)

Election officials at county, state and federal levels have said that the 2020 election was secure and that there was no widespread fraud. States certified that Biden properly won the election and Congress, following a constitutional process, also certified their validity.

Yet McCarthy’s May 12 claim that the legitimacy of Biden’s victory hasn’t been questioned is wrong — many Republican lawmakers have done so. Some have cited "irregularities" and claimed that electoral processes in some states were unconstitutional. One of them, U.S. Rep. Marjorie Taylor Greene of Georgia, notably has walked around Congress with a face mask that says "Trump won."

Trump, still embraced by many Republicans as the party leader, also continues to falsely claim that the election was stolen from him. Trump urged Republicans to push Cheney out of House leadership because she continues to contradict him on the point.

McCarthy’s office did not reply to PolitiFact’s request for comment. 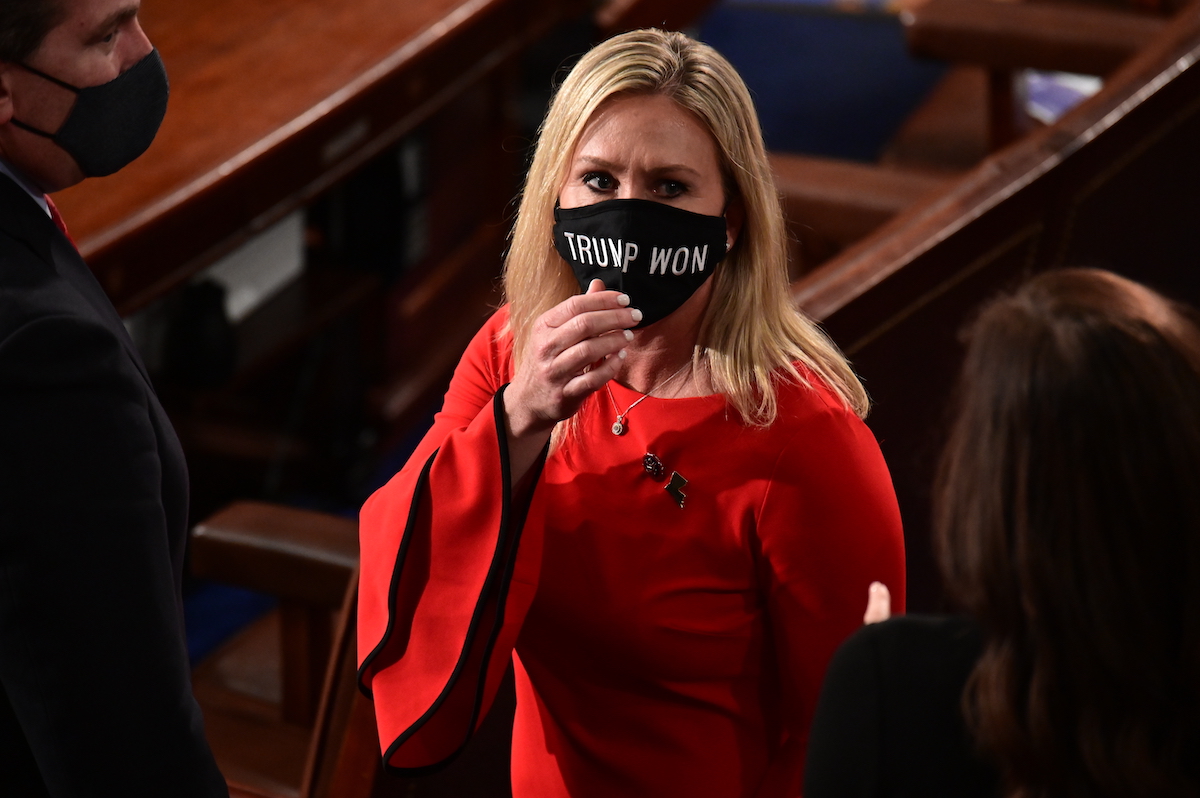 Rep. Marjorie Taylor Greene, R-Ga., wears a "Trump Won" face mask as she arrives on the floor of the House to take her oath of office on opening day of the 117th Congress at the U.S. Capitol in Washington, Jan. 3, 2021. (AP)
Republicans objected to the certification of Electoral College votes

McCarthy himself and more than 100 House Republicans voted in January against certifying election results from two states that Biden won, Arizona and Pennsylvania.

McCarthy at the time justified his objections by saying that millions of Americans were concerned about the integrity of the electoral process and that Congress had a responsibility to listen, investigate and work with states to make changes. "Constitutional questions have been raised about changes to election processes," McCarthy said.

He said that his position was "not about overturning an election" but about ensuring an "accurate and accountable process that complies with the Constitution so that millions of Americans who voted on Election Day can have confidence in our system."

Stefanik, a Trump ally, similarly argued that there were electoral issues in Pennsylvania, Georgia, Wisconsin and Michigan — four states carried by Biden.

(PolitiFact debunked many false claims about Michigan’s electoral process, including claims that falsely challenged the legitimacy of ballots counted after midnight on Election Day.)

When asked by reporters whether they believe that Biden’s election is legitimate or that the election was stolen, several Republican lawmakers dance around the question. They say Biden is the president, but raise doubts as to how he became president.

The Washington Examiner interviewed Stefanik days before her election to the third-ranking Republican post in the House and asked, "Do you agree with Trump that Biden was illegitimately elected and the election was stolen?"

She did not acknowledge a fair election.

She answered: "President Biden is president, and the focus is on defeating his radical agenda, which I believe we will do in 2024. And we're going to win the midterms in 2022. I have said that there are election irregularities and an unconstitutional overreach, which is why I objected to certain states. You can refer to my statement on the House floor. I fully stand by that, and voters support the focus on those issues. But the irregularity, the unconstitutional overreach, the lack of ballot security, those are important issues that the American people want to hear solutions from the Republicans on."

Stefanik supports an ongoing Republican-commissioned review of election results in Arizona’s Maricopa County — an effort that election experts and some election officials in other states have criticized for being partisan and lacking in transparency.

Rep. Steve Scalise of Louisiana, the second-ranking House Republican, initially dodged the question in February when asked by ABC’s Jonathan Karl about the election’s outcome.

"Joe Biden's the president. There were a few states that did not follow their state laws. That's really the dispute that you've seen continue on," Scalise said, before pivoting to talk about manufacturing jobs and "problems that happened with the election."

Karl then said: "But congressman, I know Joe Biden's the president. He lives at the White House. I asked you, is he the legitimate president of the United States, and do you concede that this election was not stolen?"

"Once the electors are counted, yes, he's the legitimate president," Scalise said, with a caveat. "But if you're going to ignore the fact that there were states that did not follow their own state legislatively set laws, that's the issue at heart, that millions of people still are not happy with and don't want to see happen again."

House Republicans voted Cheney out as their conference chair on May 12, the same day as McCarthy’s comments, after she rejected Trump’s false claims of a fraudulent election. Cheney blamed Trump for inciting the violent mob that stormed the Capitol in January as Congress certified the results of the presidential election. And in the face of her impending ouster, Cheney remained defiant.

Cheney wrote a May 5 op-ed for the Washington Post — in which she pleaded with Republicans to abandon the falsehood that Trump was cheated out of reelection.

"The 2020 presidential election was not stolen," Cheney had tweeted days earlier. "Anyone who claims it was is spreading THE BIG LIE, turning their back on the rule of law, and poisoning our democratic system."

McCarthy said during a May 4 interview on Fox News that he had heard from members concerned about Cheney’s ability "to carry out the job as conference chair, to carry out the message."

McCarthy said, "I don't think anybody is questioning the legitimacy of the presidential election."

This runs contrary to the actions and statements of numerous members and leaders of his own party, including himself. McCarthy objected to certifying election results from two states that Biden won, claiming electoral process concerns. Those concerns haven’t been proven. McCarthy and other Republicans also supported a lawsuit that challenged the validity of Biden’s victory in some states.

Some Republican lawmakers who have been questioned about Biden’s legitimate victory state the obvious — that Biden is president — while still suggesting that it happened unlawfully.

McCarthy’s claim is clearly wrong. We rate it Pants on Fire.

RELATED: Removal of Liz Cheney from House leadership is only one piece of GOP coalescing around the ‘Big Lie’

The Washington Post, Opinion: Liz Cheney: The GOP is at a turning point. History is watching us., May 5, 2021

The New York Times, The 147 Republicans Who Voted to Overturn Election Results, Jan. 7, 2021