When Donald Trump announced a way forward for the United States in Afghanistan, his decision to keep troops in the country was a sharp contrast to what he had said as a private citizen.

It wasn’t, however, all that different from what he had said as a presidential candidate.

Trump acknowledged the discrepancy in his positions in his Aug. 21 speech.

"My original instinct was to pull out -- and, historically, I like following my instincts," Trump said. "But all my life I've heard that decisions are much different when you sit behind the desk in the Oval Office."

We traced Trump’s evolving stance on the 16-year war in Afghanistan, first as a citizen, then as a presidential candidate, and now as a president.

Citizen Trump: The war is a waste of money and American lives

As a private citizen, Trump tweeted that the United States should get out of Afghanistan more than a dozen times.

• Aug 13, 2011: "Ron Paul is right that we are wasting trillions of dollars in Iraq and Afghanistan."

• Oct. 7, 2011: "When will we stop wasting our money on rebuilding Afghanistan? We must rebuild our country first."

• Dec. 6, 2012: "Karzai of Afghanistan is not sticking with our signed agreement. They are dropping us like dopes. Get out now and re-build U.S.!"

• Feb. 27, 2012: "It is time to get out of Afghanistan. We are building roads and schools for people that hate us. It is not in our national interests."

• Aug. 21, 2012: "Why are we continuing to train these Afghanis who then shoot our soldiers in the back? Afghanistan is a complete waste. Time to come home!"

• Jan. 11, 2013: "Let’s get out of Afghanistan. Our troops are being killed by the Afghanis we train and we waste billions there. Nonsense! Rebuild the USA."

• Nov. 21, 2013: "We have wasted an enormous amount of blood and treasure in Afghanistan. Their government has zero appreciation. Let's get out!"

• Dec. 1, 2014: "Now Obama is keeping our soldiers in Afghanistan for at least another year. He is losing two wars simultaneously."

Candidate Trump: The U.S. military will ‘probably’ have to stay

As a candidate, Trump regularly brought up how he had opposed the Iraq War (an assertion we found was False).

By contrast, his remarks about Afghanistan were less scarce.

Initially, Trump said the United States has erred by going into Afghanistan.

"We made a terrible mistake getting involved there in the first place," Trump said in an interview with CNN in October 2015. "We had real brilliant thinkers that didn't know what the hell they were doing. And it's a mess. It's a mess."

Even so, he telegraphed that the United States would probably have to stay, rather than pulling out.

"And at this point, you probably have to (stay) because that thing will collapse about two seconds after they leave," he said in the CNN interview.

Trump reiterated his grudging acceptance that the United States would likely have to stay in Afghanistan during the rare occasions when the topic came up for the rest of the campaign.

Trump echoed that message on March 6, 2016, during a Republican primary debate: "You have to stay in Afghanistan for a while, because of the fact that you're right next to Pakistan, which has nuclear weapons, and we have to protect that. Nuclear weapons change the game."

We’ll also note that we did not find any campaign promises by Trump on Afghanistan when we chose items for our Trump-O-Meter. 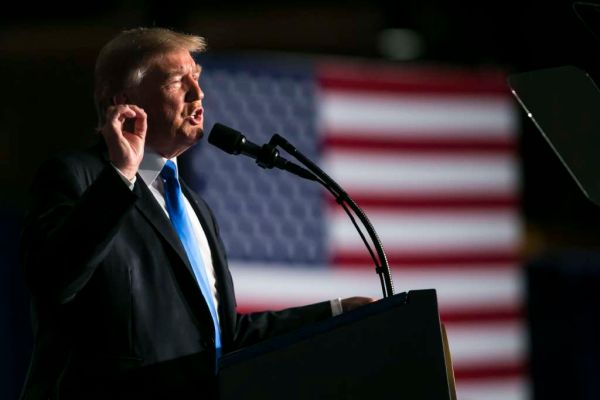 President Donald Trump delivers an address to the nation about the country's future course in Afghanistan on Aug. 21, 2017. (Al Drago/New York Times)

In his speech at Joint Base Myer-Henderson Hall, Trump offered no specific number of additional troops he would be sending to the region. This is an unusual move for recent presidents.

However, he made clear that his administration would keep and enhance its presence in the country, even as he sought to distinguish his approach from that of his predecessors, including skepticism toward "nation-building."

As he made this announcement, he expressed some discomfort with his decision.

"I share the American people’s frustration," Trump said. "I also share their frustration over a foreign policy that has spent too much time, energy, money, and most importantly lives, trying to rebuild countries in our own image, instead of pursuing our security interests above all other considerations."

Trump explained his rationale, saying he started the process after his inauguration with a direction to Defense Secretary Jim Mattis to present the strategic options in the region.

In his own words, here’s how Trump explained the strategy moving forward:

"My original instinct was to pull out -- and, historically, I like following my instincts.  But all my life I've heard that decisions are much different when you sit behind the desk in the Oval Office; in other words, when you're President of the United States.  So I studied Afghanistan in great detail and from every conceivable angle.  After many meetings, over many months, we held our final meeting last Friday at Camp David, with my Cabinet and generals, to complete our strategy.  I arrived at three fundamental conclusions about America’s core interests in Afghanistan.

"First, our nation must seek an honorable and enduring outcome worthy of the tremendous sacrifices that have been made, especially the sacrifices of lives.  The men and women who serve our nation in combat deserve a plan for victory.  They deserve the tools they need, and the trust they have earned, to fight and to win.

"Second, the consequences of a rapid exit are both predictable and unacceptable.  9/11, the worst terrorist attack in our history, was planned and directed from Afghanistan because that country was ruled by a government that gave comfort and shelter to terrorists.  A hasty withdrawal would create a vacuum that terrorists, including ISIS and al Qaeda, would instantly fill, just as happened before September 11th.

"And, as we know, in 2011, America hastily and mistakenly withdrew from Iraq.  As a result, our hard-won gains slipped back into the hands of terrorist enemies.  Our soldiers watched as cities they had fought for, and bled to liberate, and won, were occupied by a terrorist group called ISIS.  The vacuum we created by leaving too soon gave safe haven for ISIS to spread, to grow, recruit, and launch attacks.  We cannot repeat in Afghanistan the mistake our leaders made in Iraq.

"Third and finally, I concluded that the security threats we face in Afghanistan and the broader region are immense.  Today, 20 U.S.-designated foreign terrorist organizations are active in Afghanistan and Pakistan -- the highest concentration in any region anywhere in the world.

"For its part, Pakistan often gives safe haven to agents of chaos, violence, and terror.  The threat is worse because Pakistan and India are two nuclear-armed states whose tense relations threaten to spiral into conflict.  And that could happen.

"No one denies that we have inherited a challenging and troubling situation in Afghanistan and South Asia, but we do not have the luxury of going back in time and making different or better decisions."