Who wins and who loses from the tax bill?
By Louis Jacobson December 19, 2017

As Congress nears passage of a Republican-backed tax bill, there’s been a lot of discussion about who will benefit and who won’t. Here is some data about the winners and losers under the bill.

We’re using data from two sources. One is the Joint Committee on Taxation, the nonpartisan group that analyzes tax bills for Congress. The other is the Urban Institute-Brookings Institution Tax Policy Center, an independent group that models the effects of tax legislation. Both groups analyzed previous versions of the bill, but in this article we’ll look at their analyses of the final version that, assuming it passes and is signed by President Donald Trump, will become law.

• Will poor, middle-class and rich Americans all benefit, on average?

• Are the gains for each income group proportionate to their share of the tax-paying population?

• Can taxpayers expect any gains to last?

Here’s our first chart, which uses Joint Committee on Taxation data. It shows how various income ranges would fare in 2019 -- the first year the committee looked at -- under the bill. We’ve listed the overall change in taxes paid for each income group, with cuts noted as negative and increases noted as positive (the second column). We then calculated the share of those gains received by each income range (the third column), and compared that to the percentage of taxpayers who fall into that income range (the fourth column).

The good news for taxpayers is that every income group would pay less in taxes in 2019. (This is the case for these income groups as a whole -- individual taxpayers may not necessarily gain. More on that in a moment.)

That said, the benefits of the tax bill would flow disproportionately to wealthier taxpayers.

About half of the households filing returns had incomes below $50,000, according to the Joint Committee on Taxation, but they collectively get just 6.6 percent of the tax gains in the bill.

By contrast, only about 1 percent of households filing returns had incomes above $500,000, but they stand to gain 23 percent of the benefits from the bill. (It’s worth noting that the United States has a progressive tax system, which means that taxpayers with higher incomes pay a larger share of their income in taxes. So it’s not surprising that wealthier taxpayers would receive a greater share of the benefits in a tax bill.)

So what happens further in the future? Here’s the Joint Committee on Taxation analysis of the tax bill’s impacts in 2027:

Meanwhile, if you look at the income groups who gain in 2027, there’s an even stronger skew toward the wealthiest taxpayers. The top 1 percent of taxpayers -- those earning at least $500,000 -- take 48 percent of the gains.

Why the big changes by 2027? The primary reason is that some of the individual tax cuts phase out in 2025. In addition, some of the inflation adjustments used under the bill are less generous than the current ones.

Now remember that the previous charts reflected the cumulative gains for each income range. However, the fact that members of an income range gain collectively doesn’t mean that every single member of that income group is better off -- it just means that, on average, gains outpace losses. The reality is that some taxpayers in every income group will lose, even when their group gains as a whole.

To get at this question, we’ve used data from the Tax Policy Center showing the projected breakdown between gainers and losers under the tax bill. First, let’s look at what happens in 2018. (Note: The center uses percentiles to define income ranges, rather than the dollar amounts used by the Joint Committee on Taxation, and it also chose to publish its analysis for 2018 rather than 2019.)

For 2018, the likelihood of benefiting from the bill isn’t 100 percent, but for every group, there are many more gainers than there are losers. Indeed, for all but the top 1 percent, no income group has more than a 7.6 percent chance that of losing ground under the tax bill in 2018.

Notice how the benefits shrink for most taxpayers in 2027.

But fewer than one-third of taxpayers in the bottom 80 percent of the income spectrum would see a tax cut in 2027. 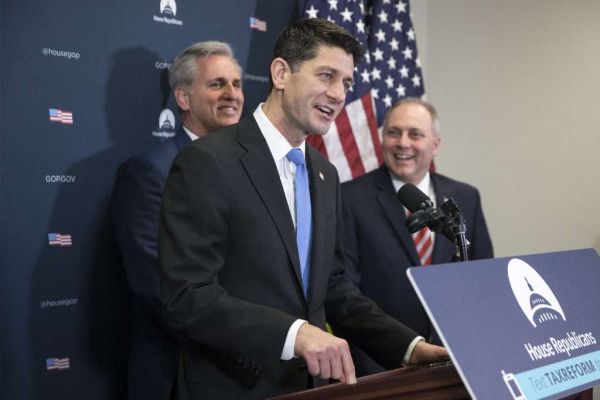 House Speaker Paul Ryan, R-Wis., speaks during a news conference on Capitol Hill on Dec. 19, 2017, after the House had begun debate on the final version of a major tax bill. (Tom Brenner/New York Times)

Joint Committee on Taxation, "Distributional Effects Of The Conference Agreement For H.R.1, The Tax Cuts And Jobs Act," Dec. 18, 2017