Russia's social media efforts in 2016 were not just false but inflammatory
By John Kruzel December 21, 2017

Dueling protests erupted at the Islamic Center in Houston on May 21, 2016, after being advertised on what appeared to be rival Facebook groups.

But were they rivals after all?

One group, called "Heart of Texas," regularly promoted anti-immigration and anti-Muslim messages to its more than 250,000 Facebook followers. The group planned its public event on Facebook to occur at the Islamic Center "to stop the Islamization of Texas."

A second group, "The United Muslims of America," was dedicated to spreading pro-Islamic themes to its more than 328,000 followers. This group also created a public event — to occur at the same time and place as the Heart of Texas event — in order to "save Islamic knowledge." 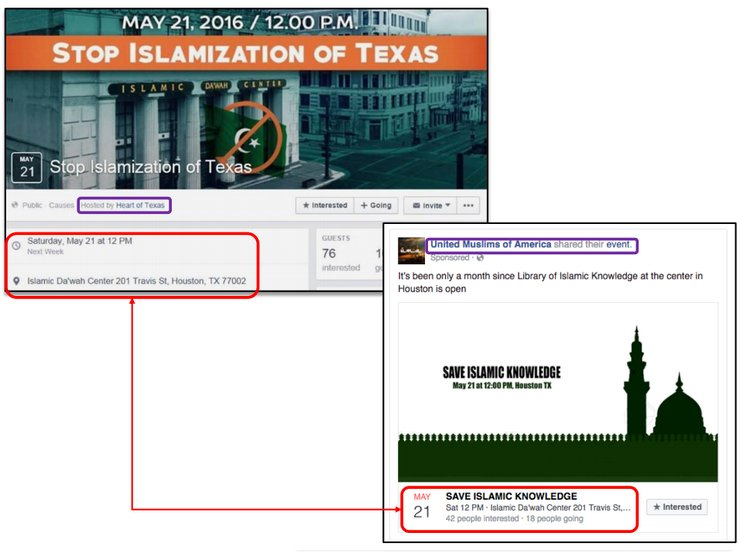 Nearly 15,000 people would view ads promoting the events. Then, on May 21, followers of the Heart of Texas group took to the Houston streets to mount a protest in front of the Islamic Center. It was met with a counter-protest by followers of the group The United Muslims of America.

Unbeknownst to attendees, the dueling events had been orchestrated by the Internet Research Agency, a Kremlin-linked "troll farm" located in St. Petersburg, Russia, that operated the accounts of both Facebook groups, according to findings presented by the bipartisan Senate Intelligence Committee. 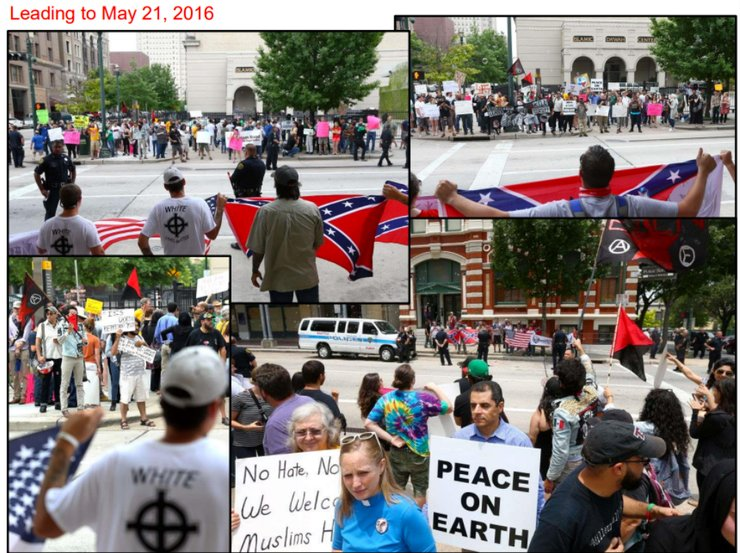 "What neither side could have known is that Russia trolls were encouraging both sides to battle in the streets and create division between real Americans," said Sen. Richard Burr, R-N.C., who chairs the Senate Intelligence Committee, at a Nov. 1 hearing on Russia’s meddling in the 2016 campaign.

Burr noted with irony that one attendee expressed bewilderment to a local journalist over the event organizers’ absence.

"We now know why (they weren’t there)," Burr said. "It's hard to attend an event in Houston, Texas, when you're trolling from a site in St. Petersburg, Russia."

It cost Russia about $200 to set up the competing Facebook groups and pay for the ads that sparked the protests, Burr said.

The U.S. intelligence community’s conclusion that Russia intervened to help the election chances of Donald Trump while hurting those of Hillary Clinton is familiar to anyone who followed the 2016 presidential race. Part of those efforts centered on false reports, the "fake news" that fact-checkers have since been debunking.

But less well known are Kremlin efforts to further polarize American society, not by planting false reports but by simply stoking passions on both sides of deeply divisive issues.

The fact that roughly 90 percent of Kremlin-backed Facebook ads that ran during the election centered on political issues, not candidates, gets overlooked.

The scale of Moscow’s efforts during the 2016 campaign is staggering: More than 150 million people were likely exposed to Russian disinformation on Facebook in the two-year period before the vote, the company said. Much of this material isn’t fact-check-able per se, but it continues to fuel greater polarization.

Through an influence campaign that spiked during the 2016 election and continues to stretch into Trump’s first year in office, Russia has sought to deepen divisions over issues both big and small, from undermining Trump’s legitimacy to fomenting anger over a coffee machine maker’s boycott of a Fox News program.

"Their playbook is to basically to pit Americans against each other," said Jamie Fly, a senior fellow at the foreign policy think tank the German Marshall Fund, which tracks Russian propaganda activity. "It’s not even based on party identification, but people on either side of social or cultural divides.

"The goal is to throw America off balance," he added, "to make it inward-focused and not able to deal with external challenges."

Media coverage of Russian propaganda may have waned after the 2016 election, but Kremlin watchers warn that Moscow’s influence campaign remains robust.

"It’s dangerous to think this was a 2016 issue and only related to the presidential election," said Fly, of the German Marshall Fund. "The bigger problem is that the Russians never left. They’re clearly continuing this."

During hearings on Capitol Hill about the role of social media in Russia’s election meddling, executives from Facebook and Twitter noted an uptick in messaging that called into question Trump’s legitimacy as president following his electoral win.

"In the wake of the election, and now-President Trump's (transition), we saw a lot of activity directed at fomenting discord about the validity of his election," Facebook general counsel Colin Stretch told lawmakers in an Oct. 31 hearing.

Despite these efforts, Russia’s post-election propaganda has been mostly supportive of the Trump administration, Fly said. Overall, he added, Kremlin-backed trolls take an "equal opportunity" attitude when it comes to courting controversy.

He noted that Russian-linked accounts pushed messages related both to white supremacy and Black Lives Matter following the racially-charged fatal clashes in Charlottesville, Va., in August.

"They go after both sides," Fly said.

Russian propagandists caught lawmakers’ attention for playing both sides on the debate over NFL football players kneeling during the national anthem to draw attention to criminal justice issues.

"We watched, even this weekend, the Russians and their troll farms, their internet folks, start hashtagging out #TakeAKnee and also hashtagging out #BoycottNFL," Sen. James Lankford, R-Okla., said during a Sept. 27 hearing on national security.

Their aim, he said, was "to try to raise the noise level of America and make a big issue seem like an even bigger issue, as they are trying to push divisiveness in this country."

They fanned the flames after a not guilty verdict was handed down in the politically-charged case of Kate Steinle. They even amplified the drama around the coffee machine company Keurig’s decision to pull ads from Sean Hannity’s Fox News show.

Fly said increased awareness of these activities is a positive first step toward eventually mitigating the problem. But the Kremlin’s propaganda machine will continue to pose a challenge for some time, he said.

"This is like a dial that can be turned up every day, every hour," he said. "If they want to weigh in on an election, they can dial it up."

Interview with Jamie Fly, a senior fellow at the German Marshall Fund, Dec. 18, 2017