Immigrant deaths and the science behind temperatures rising inside parked cars, trucks

Among sad facts connected to this week’s accounts of immigrants found prostate or dead inside a truck trailer parked in San Antonio is a declaration about how quickly closed vehicles can heat up.

"At just 80 degrees outside, the temperature inside a closed car can reach 115 degrees in less than half an hour," the Austin American-Statesman said in a July 24, 2017, news story about the driver of the tractor-trailer facing federal charges. The story said dozens of people on Sunday were found crammed inside the trailer, which was parked outside an Alamo City Walmart, and that 10 people had died from the heat inside the trailer.

We corraled some research behind the idea that vehicle interiors perilously warm up:

--In 2005, Stanford University physicians teamed with San Jose State University research meteorologist Jan Null found that even on cool days, the temperature can surge to life-threatening levels in a car if the sun is out. The researchers, employing a thermometer placed in a vehicle that sent readings every minute to Null’s laptop,  found that on sunny days with highs ranging from 72 to 96 degrees Farenheit, the temperature inside a sealed car can heat up an average of 40 degrees F within an hour--with 80 percent of the rise occurring within the first half-hour.

--Null’s website devoted to fighting heat stroke includes a chart showing what Null told us were  his direct observations of rising temperatures in vehicles plus columns of entries termed "anecdotal data" suggesting temperature increases when it’s very hot outdoors. Among the recorded changes: A vehicle parked when it's 90 degrees F outdoors reaches 119 degrees F after 30 minutes: 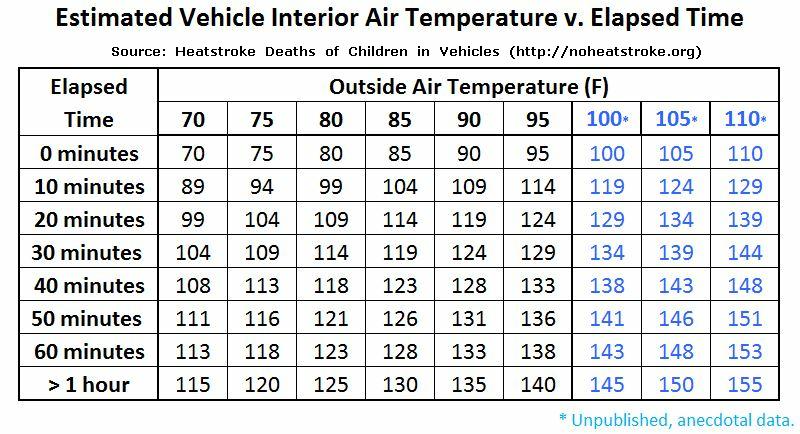 --A June 2016 news story in the Dallas Morning News quoted Null saying that cracking the windows in a parked car doesn’t have much effect on the temperature inside. In Null’s tests, the story said, a 1 1/2 inch crack in each window made the car just 2 degrees cooler.

--Texas researchers using 2012 temperature data found that in summer heat, an infant left in an enclosed vehicle could have heat stroke within 105 minutes, dying within 125 minutes. A WebMD account of the study said that in all but two months -- December and January 2012 -- temperatures inside the car shot up to National Weather Service "danger" levels of greater than 105 degrees. "In all 12 months, temperatures rose to at least 90 degrees in the car," WebMD said, gonig on: "Ninety degrees is the point where the National Weather Service says people should use ‘extreme caution,’ because the risk of heat illness is higher."

By phone, Null told us it’s likely that temperatures inside the trailer-rig found in San Antonio did not rise as quickly as what would happen in an enclosed windowed vehicle though, he said, the trailer (with one opening, but no windows) was "still basically an oven" especially considering its many passengers were packed in.

Temperatures in San Antonio Saturday, when the rig was presumably parked, hit 101 degrees and remained above 90 degrees well into the night. Early Sunday, after a person from the trailer approached a Walmart employee seeking water, the employee called authorities.