Beto O'Rourke
stated on July 26, 2018 in an ad in the Houston Defender:
Says "black Americans have 10 times less wealth than white Americans."

A reminder: Wealth is distinct from income. It measures how much we own, not how much we make. While the two are closely tied, economists talk about wealth in terms of net worth. A house, for example, adds to net worth if its value is higher than the amount of the mortgage. Assets minus debts gives you net worth.

We asked O’Rourke’s campaign about the basis of O’Rourke’s "10 times less" claim in the ad, which had come to our attention in a Texas Tribune news story on O’Rourke’s advertising expenditures.

The Wonkblog story says that according to the survey results, the "median net worth of white families — $171,000 — is now 10 times that of black families and eight times that of Hispanic families." A factor, the story says, is that "white families are five times more likely than black or Hispanic families to inherit money. That translates into opportunity — a down payment on a home, tuition to go to school, capital to build a small business, savings to retire on." Other factors, the story says, include distinct rates of home ownership and participation in job-related savings plans.

According to a pair of September 2017 Federal Reserve articles, the agency’s 2016 Survey of Consumer Finances reached 6,254 families with queries on households’ total pre-tax income, balance sheets, pensions, income and demographic characteristics. "No other study for the country collects comparable information," the agency says.

The 2016 survey found about a 10-to-1 difference in the median wealth/net worth of white and black Americans--the ratio between $171,000 and $17,600. Net worth is defined as the difference between families' gross assets and their liabilities.

The survey results otherwise suggest the difference in the average wealth of white and black Americans is nearly 7-to-1--$933,700 for white residents and $138,200 for black residents. (An equal number of households earn more and less than each median. Averages are based on adding up reported incomes and dividing by the number of households.)

The Fed offered one other comparison: Nearly 1 in 5 black households reported zero or negative net worth compared to a smaller share of white households, 9 percent, the study says.

We spotted a Fed chart specifying disparities by race identified in the survey in household income and by whether people reported owning  homes and cars or having retirement accounts: 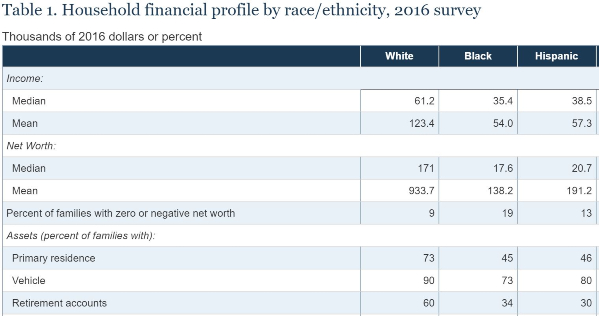 SOURCE: Excerpted from chart in data analysis, "Recent Trends in Wealth-Holding by Race and Ethnicity: Evidence from the Survey of Consumer Finances," FEDS Notes, Board of Governors of the Federal Reserve System, Sept. 27, 2017 (accessed Aug. 17, 2018)

As O’Rourke’s spokesman also noted, the Pew Research Center took a longer view of the wealth disparity singled out by O’Rourke. Pew’s November 2017 Fact Tank story says that according to the Fed’s surveys over the years, the wealth gap between white and black and Hispanic households shrank by about half from 2007 to 2016.

The month before, another non-partisan entity, the Urban Institute, updated its charts drawing on the Fed’s surveys. For more than 50 years, the institute says, white families have outpaced black and Hispanic families in average wealth.

We asked the institute to evaluate O’Rourke’s claim. The statement had the right spirit, we heard back, though Caroline Ratcliffe, a senior fellow, offered a caveat in that the 2016 Fed survey suggests that black Americans had one-tenth the median wealth of whites, not 10 times less.

News story, "Beto O’Rourke’s first TV ad is out today. But he’s quietly been in print and radio for months," Texas Tribune, Aug. 15, 2018

News analysis, "Here’s why the wealth gap is widening between white families and everyone else," Wonkblog, The Washington Post, Oct. 5, 2017

Article, "Changes in U.S. Family Finances from 2013 to 2016: Evidence from the Survey of Consumer Finances," Federal Reserve Bulletin, Board of Governors of the Federal Reserve System, September 2017

Article, "Recent Trends in Wealth-Holding by Race and Ethnicity: Evidence from the Survey of Consumer Finances," FEDS Notes, Board of Governors of the Federal Reserve System, Sept. 27, 2017

Web pages, "Survey of Consumer Finances," "About," Board of Governors of the Federal Reserve System (accessed August 2018)

Analysis, "How wealth inequality has changed in the U.S. since the Great Recession, by race, ethnicity and income," Fact Tank, Pew Research Center, Nov. 1, 2017