"If a new HealthCare Bill is not approved quickly, BAILOUTS for Insurance Companies and BAILOUTS for Members of Congress will end very soon!" Trump tweeted July 29, 2017.

If a new HealthCare Bill is not approved quickly, BAILOUTS for Insurance Companies and BAILOUTS for Members of Congress will end very soon!

Trump’s reference to an insurance company "bailout" likely refers to reimbursements the federal government gives carriers who cover certain lower-income Americans in Obamacare exchanges. (We also investigated his claim about bailouts for Congress in this story.)

Insurance companies are required under Obamacare to share the cost of deductibles, copays and other out-of-pocket expenses borne by roughly 7 million customers whose incomes are below 250 percent of the federal poverty line, or less than about $30,000 for a single person.

The federal government has reimbursed insurance companies for these contributions, known as "cost-sharing reductions," or CSRs. This year, insurers are on track to receive $7 billion in these reimbursements, and $10 billion in 2018, according to the nonpartisan Congressional Budget Office.

"I would strongly argue with the characterization of these as a ‘bailout,’ " said Linda Blumberg, a senior fellow at the Urban Institute, who underscored that insurers are required by law to share costs with consumers.

While the precise impact of Trump’s proposal to end these reimbursements is unknown, experts have said ending the payments could drive up the cost of insurance while reducing the number of options for consumers.

"If the CSR payments end... insurers would face significant revenue shortfalls this year and next," the Kaiser Family Foundation wrote earlier this year when Trump was noncommittal to Obamacare subsidies. "Many insurers might react to the end of subsidy payments by exiting the ACA marketplaces. If insurers choose to remain in the marketplaces, they would need to raise premiums to offset the loss of the payments."

If Trump’s move resulted in higher premiums, it could actually end up costing the federal government more money than continuing with the status quo, Blumberg said.

That’s because the federal government gives premium tax credits to help lower-income Americans buy insurance (those making up to 400 percent of the federal poverty line are eligible). The law also caps the amount of income this group can spend on premiums.

The Kaiser Family Foundation estimated "the increased cost to the federal government of higher premium tax credits would be 23 percent more than the savings from eliminating cost-sharing reduction payments." 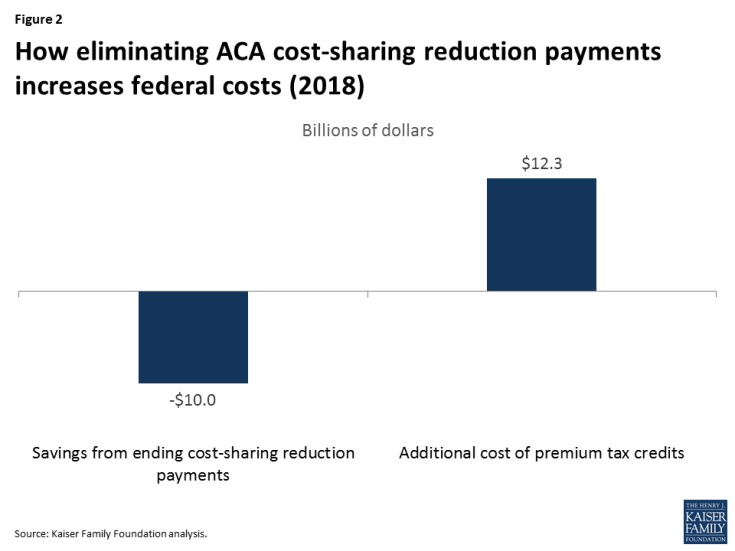 Premium hikes could also have other negative consequences.

Healthier consumers might decide it makes more sense to go without insurance and pay a penalty rather than buy an expense plan they may never need, Blumberg said.

This could result in a pool of customers that some insurance companies view as simply too risky, with too few healthy customers offsetting sicker customers that are more likely to use their insurance.

Faced with this prospect, some insurers could choose to simply drop out of individual exchanges altogether, which would lead to reduced choice -- or even zero options -- for consumers in some areas, Blumberg said.

Email interview with Linda Blumberg, a senior fellow at the Urban Institute, July 31, 2017