Is the Center for Immigration Studies a hate group, as the Southern Poverty Law Center says?

Protesters have their say against President Trump's executive orders on immigration during a rally at Miami International Airport on Sunday, January 29, 2017. (Miami Herald)

The term "hate group" usually brings to mind groups like the Ku Klux Klan, which has targeted African-Americans for centuries, or Neo-Nazi groups that admire Adolf Hitler.

Not think tanks that focus on immigration.

Yet the Southern Poverty Law Center recently included the Center for Immigration Studies on its annual list of hate groups.

In an op-ed in the Washington Post, the Center for Immigration Studies’ executive director, Mark Krikorian, argued that the label is misplaced and intended to suppress their viewpoint.

"The wickedness of the SPLC's blacklist lies in the fact that it conflates groups that really do preach hatred, such as the Ku Klux Klan and Nation of Islam, with ones that simply do not share the SPLC's political preferences," he wrote.

The Southern Poverty Law Center’s designation hasn’t gone unnoticed. In January, House Republicans in the Florida Legislature invited Krikorian to speak about refugees. House Democrats walked out of the hearing in protest.

PolitiFact has quoted Krikorian or other officials at his center in multiple articles about immigration. After reading Krikorian’s editorial -- in which he said the Southern Poverty Law Center’s complaints were trivial -- we decided to review the evidence for ourselves.

We found the case against the center is based on some of its associations rather than its current work.

But we want readers to review the evidence for themselves.

The SPLC is a civil rights organization that has tracked hate groups since the 1980s. The center has opposed President Donald Trump’s immigration bans and blamed his "incendiary rhetoric" for an increase in anti-Muslim hate. The SPLC has supported a path to citizenship.

The Center for Immigration Studies, headed by Krikorian, churns out research and blog posts about proposed legislation, court decisions and arrest data and the costs of illegal immigration borne by the government.

CIS uses data to argue for low levels of immigration. For example, it mapped the impact of immigration on public schools and said it "raises profound questions about assimilation."

CIS doesn’t provide details on its funders, although one of its main sources is the Colcom Foundation, a group that warns about overpopulation. IRS tax records for 2015 show that Colcom gave about $1.7 million to CIS. The foundation’s vice president of philanthropy is the biographer of John Tanton, who helped found CIS.

The two groups have sparred for years, particularly after SPLC included another group, the Federation for American Immigration Reform, on its hate-group list in 2007. SPLC included CIS on this list for the first time in February 2017.

The SPLC includes a brief description about its definitions and methodology:

"All hate groups have beliefs or practices that attack or malign an entire class of people, typically for their immutable characteristics," and its list was compiled using "hate group publications and websites, citizen and law enforcement reports, field sources and news reports."

Mark Potok, a senior fellow at the SPLC, previously told PolitiFact Texas that a group doesn’t land on the list only because it advocates for less immigration. Also, the list is not based on criminality or violence.

"It’s based on the ideology expressed by the group, on its website or by its leaders," he said. "We ask, does it demonize an entire group? Those are the hardest line groups we cover."

Heidi Beirich, director of SPLC’s Intelligence Project, summarized why CIS landed on the list in the America’s Voice blog:

"CIS has a long history of bigotry, starting with its founder, white nationalist John Tanton, but in 2016, the group hit a new low. CIS commissioned Jason Richwine, a man who’s Ph.D. dissertation endorses the idea of IQ differences between the races, to write multiple reports and blog pieces for the organization. The group also continued to circulate racist and anti-Semitic authors to its supporters, and finally, staffer John Miano attended the white nationalist group VDARE’s Christmas party in December."

Let’s look at the evidence cited by SPLC in more detail:

Email listserv: CIS circulates a weekly email listserv with dozens of links to articles about immigration. The SPLC said that these emails have highlighted articles by "white nationalists" such as Paul Weston, a Holocaust denier, and articles by American Renaissance, run by Jared Taylor, who has made racist statements about blacks. One article entitled "Voting for Hillary equals more Muslim killings of Americans" claimed that Clinton’s assistant "works fervently for Sharia law in America" and that Trump would give the United States a chance to "survive this immigration invasion."

These suggested reading lists "tipped the balance" for the SPLC to name CIS a hate group, Beirich told PolitiFact.

But the list also includes articles from mainstream publications such as an op-ed by an economics columnist for the Washington Post and op-ed in the New York Times about the cost of immigration.

Krikorian wrote in his op-ed that the weekly email "roundup of immigration commentary (from all sides) has occasionally included pieces by writers who turned out to be cranks."

John Tanton: Tanton is a Michigan eye doctor who has been described as the "father of the modern anti-immigration movement." He helped found the immigration restriction group Federation for American Immigration Reform in 1979 and helped form CIS in 1985 and later NumbersUSA.

In a 2002 investigation, the SPLC cited memos he wrote to colleagues that included derogatory references to Latinos. Tanton speculated on the impact of immigration to California. "Will Latin American migrants bring with them the tradition of the mordida (bribe), the lack of involvement in public affairs, etc.?" he wrote.

Several newspaper articles have dissected statements from Tanton and his ties to eugenics and English-language campaigns.

Krikorian has downplayed Tanton’s role in CIS and points to a statement by Tanton in response to what SPLC wrote about him in 2002: "I also helped raise a grant in 1985 for the Center for Immigration Studies, but I have played no role in the center's growth or development."

The SPLC sent PolitiFact letters showing that Tanton corresponded with Krikorian in the 1990s. But we found no recent connections between Tanton and CIS.

Jason Richwine: In 2013, Richwine resigned his job at the conservative Heritage Foundation amid controversy about his Harvard dissertation "IQ and Immigration Policy," which stated that the "average IQ of immigrants in the United States is substantially lower than that of the white native population, and the difference is likely to persist over several generations."

Richwine defended his work as grounded in science.

In 2016, Richwine began writing reports and blogs for CIS about immigration and wages, immigrants and welfare and the cultural values of certain immigrant groups, among other topics.

John Miano: Miano is a CIS fellow who attended a Christmas party in December 2016 hosted by VDARE, an anti-immigration website often described as promoting white nationalists, although the website disputes that label. (VDARE stands for Virginia Dare, said to be the first English child born in the Americas.)

Miano told PolitiFact that editor Peter Brimelow is a friend of his and connected him with Michelle Malkin to write a book. Brimelow invited Miano to the party so he could meet Ann Coulter.

"For someone who has a paper trail as extensive as I do, you would think that, if a case for bigotry, racism, anti-semitism, whatever, could be made, it would be done using my writings, rather than attending a friend's Christmas party," Miano said.

The Southern Poverty Law Centers appears to be the key entity in the United States that creates a list of hate groups. The FBI does not classify groups as hate groups, although it keeps track of hate crime statistics.

We found differing opinions among experts about whether the Southern Poverty Law Center’s list is legitimate.

Brian Levin, who is director of the Center for the Study of Hate and Extremism and worked at SPLC 21 years ago, said the SPLC is on "thoroughly solid ground with their designation" of CIS as a hate group. Levin points to statements by the group’s founder, Tanton, and Richwine’s assertions about IQ and immigrants as qualifying criteria

He said that groups that don’t fit the traditional "gutter realm" of bigotry — such as those who display swastikas — can still be considered hate groups, although his center doesn’t create such a list.

"If I am being asked specifically, are there objective facts that vigorously support that designation, in this case the answer is absolutely," he said.

On the other hand, Cornell Law professor William Jacobson, author of the conservative Legal Insurrection blog, has criticized the hate-group list for years.

"For groups that do not threaten violence, the use of SPLC’s ‘hate group’ or ‘extremist’ designation poses a danger of being exploited as an excuse to silence speech and to skew political debate," he told PolitiFact.

"It taints not only the group or person, but others who associate with them. It has a very chilling impact on political debate," he added. "It seems that CIS has been placed on the hate-group list because SPLC disagrees with CIS's positions on immigration." 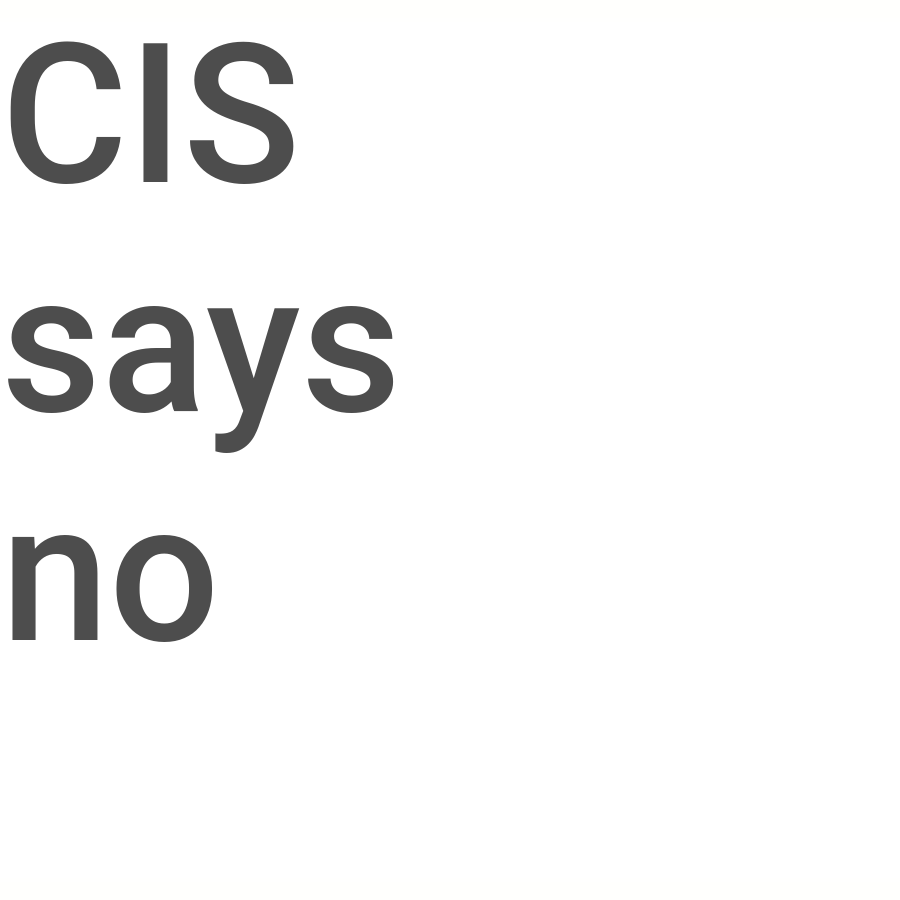 Center for Immigration Studies, "Immigration and the SPLC," March 2010

Interview, Brian Levin, California State University professor and director of the Center for the Study of Hate and Extremism, March 21, 2017