What does the law say about Donald Trump’s deleted tweets?
By John Kruzel September 27, 2017

President Donald Trump backed the wrong horse in Alabama’s special senate election — but if his recently deleted tweets are any measure, he’s trying to change the narrative. 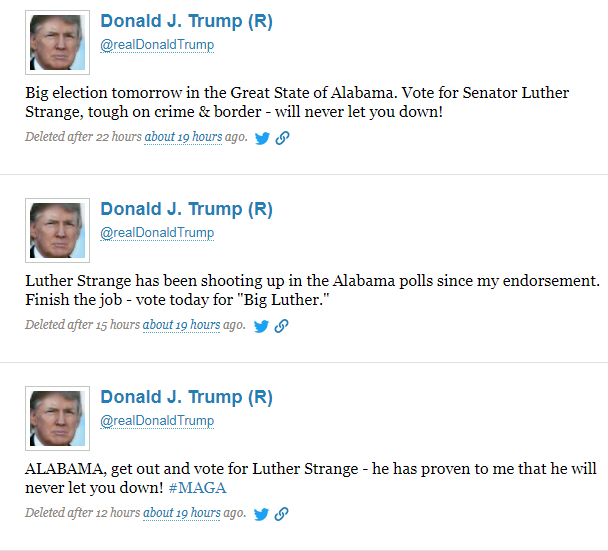 With the Trump administration facing a lawsuit over its record-keeping practices, we decided to look at the rules around preserving presidential tweets for the historical record.

What are the rules for saving presidential tweets?

Since long before Twitter came to be, the key law governing presidential record-keeping has been the Presidential Records Act, which was passed in 1978 on the heels of the constitutional showdown over access to President Richard Nixon’s tapes. Essentially, the act changed the legal ownership of presidential records from private to public, experts said.

"The law overturned the long-running tradition of private ownership that dated to the beginning of the Republic by declaring that after January 20, 1981, the records of all presidents would be the property of the American people," said Bruce Montgomery, a professor at the University of Colorado Boulder, where he was formerly the director of archives.

Experts had differing thoughts over whether Trump’s pro-Strange tweets were presidential or personal records.

He pointed us to the provision of the law — 44 USC s. 2201(3) — that defines personal records. Materials that directly relate to the president’s own election, or "the election of a particular individual or individuals to Federal, State, or local office" are defined as personal records, and thus outside the scope of the law.

"I think it’s pretty clear that the Strange/Moore/Alabama tweets are not covered by the act, but are personal records not subject to preservation," Coffin argued.

"In the case of the Luther Strange tweets, it is a toss up," she said. "Are the tweets just part of the Trump 2020 campaign (which would seem to be unrelated to official or ceremonial duties of the president), or are they supportive of certain legislative policies that may fall within the president’s powers under Article II of the Constitution or other statutes? I really don’t know what a court would do here."

A lawsuit filed against Trump and his administration over its record-keeping practices singles out other deleted tweets.

Jordan Libowitz, communications director at Citizens for Responsibility and Ethics in Washington, or CREW, pointed us to a Trump tweet from February (via The Independent) about Trump’s upcoming meeting with generals at his Mar-A-Lago resort. CREW is one of the plaintiffs in the lawsuit. 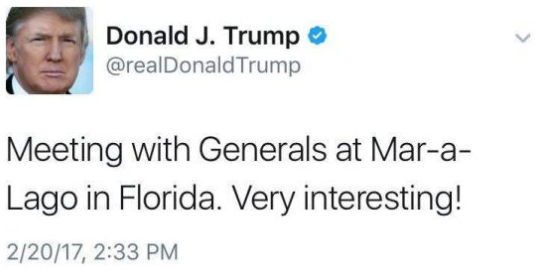 According to The Independent, that tweet garnered thousands of retweets before being "mysteriously deleted."

"When the president tweets then deletes announcements of meetings he has in his official capacity as president, he is destroying a presidential record," Libowitz said. "The government has said that tweets from the @realdonaldtrump account are official statements. Therefore, they are covered by the Presidential Records Act and must be archived."

Libowitz said that while Trump’s deleted tweets are a minor part of the litigation overall, they’re emblematic of a larger issue if they’re being deleted without being archived.

So what happens if a tweet-as-presidential record is wrongly deleted?

Experts were split over how much enforcement power courts have in the arena of presidential record-keeping, though most seemed to agree the president has the upper hand.

That said, many of the experts we spoke to are closely monitoring how the court responds to the litigation around Trump administration record-keeping.

Citizens for Responsibility and Ethics in Washington press release, June 22, 2017

Email interview with Bruce Montgomery, professor at the University of Colorado Boulder and former director of the school’s archives, Sept. 27, 2017

Email interview with Jordan Libowitz, communications director at Citizens for Responsibility and Ethics in Washington, Sept. 27, 2017