Claims we rated Pants-on-Fire ranked high among readers in 2018 –– accounting for four out of the 10 most popular fact-checks.

President Donald Trump  was also popular. Readers put four of his claims –– on Saudi Arabia, Iran, Russia and Amazon –– on the list.

In terms of topics, guns led with three, followed by immigration with two.

No. 10: Trump said, "Only fools, or worse, are saying that our money losing Post Office makes money with Amazon. THEY LOSE A FORTUNE, and this will be changed."

In an April 2 tweet, Trump said the Post Office loses a fortune on packages it delivers for the online shopping giant Amazon.

The Postal Service reported a net loss of $2.7 billion for 2017, but package delivery was one of the few growth areas. Deals with private shippers like Amazon brought in $7 billion And the 2006 Postal Accountability and Enhancement Act made it illegal for USPS to price parcel delivery below its cost.

The Postal Service’s contract with Amazon remains confidential, but an independent regulatory commission that reviews their deals annually gave it a green light.

Maybe the agency could negotiate a better deal, but the one it has runs in the black. We rated this claim False.

No. 9: Trump said that Saudi Arabia has ordered $450 billion in goods and services from the United States, "$110 billion of which is a military order," producing "over a million jobs."

After Saudi Arabia murdered journalist Jamal Khashoggi in its Istanbul embassy, Trump weighed the death against America’s business interests with the Middle Eastern kingdom. But his numbers didn’t have much to back them up.

"We have $450 billion, $110 billion of which is a military order, but this is equipment and various things ordered from Saudi Arabia, $450 billion," Trump said. "I think it's over a million jobs. That's not helpful for us to cancel an order like that. That hurts us far more than it hurts them."

There is no data behind the $450 billion, and the $110 billion is a blend of smaller deals in progress, old offers that have not come through, and speculative discussions that have yet to move forward. If the $450 billion in orders is a mirage, the 1 million jobs is equally without substance. A sure Pants-on-Fire.

No. 8: Trump said, "I never said Russia did not meddle in the election."

The February indictments of 13 Russians detailing how they used Facebook and Twitter to undercut Hillary Clinton and promote President Donald Trump spurred a flurry of tweets from Trump.

"I never said Russia did not meddle in the election," Trump wrote Feb. 18. "I said ‘it may be Russia, or China or another country or group, or it may be a 400 pound genius sitting in bed and playing with his computer.’ The Russian ‘hoax’ was that the Trump campaign colluded with Russia - it never did!"

Trump’s blanket denial that he ever questioned Russian meddling ran up against his own words.

In a May 2017 interview with NBC’s Lester Holt, Trump said, "This Russia thing with Trump and Russia is a made-up story." When the Washington Post reported in December 2016 that the CIA had concluded that the Russians wanted to boost Trump’s chances, Trump rejected that.

Even when he acknowledged the possibility that the Russians interfered, he added that it could have been other countries or even individuals. This claim came in as Pants-on-Fire.

No. 7: Trump said the nuclear deal gave Iran "$150 billion, giving $1.8 billion in cash — in actual cash carried out in barrels and in boxes from airplanes."

This claim is partially accurate. In a wide ranging phone call to Fox & Friends April 26, President Donald Trump repeated his objection to the 2015 nuclear agreement that rolled back Iran’s nuclear program.

"The past administration made a horrible deal giving $150 billion," Trump said. "Giving $1.8 billion in cash — in actual cash carried out in barrels and in boxes from airplanes."

The $150 billion is the highest estimate we could find, and the one with the least evidence to support it. The high-end estimate from the U.S. Treasury Department in 2015 was $56 billion, and outside analysts believe the number could be lower.

The $1.8 billion is reasonable. The official amount is $1.7 billion. However, there’s no evidence that barrels and boxes were involved. A Half True for Trump.

No. 6: A doctored image shows Parkland school shooting survivor Emma Gonzalez ripping up the US Constitution.

After the shooting deaths of 17 people at the Marjory Stoneman Douglas High School in Parkland, Fla., the group of students from the school who pressed for action on gun control became targets of attacks. Emma Gonzalez was one of those students.

Images on the Internet of Gonzalez ripping up the U.S. Constitution gained lots of traction on social media. The images were doctored. Fakery is an instant Pants-on-Fire.

The original picture was taken from a video by Teen Vogue in which Gonzalez rips up a gun-range target. Don Moynihan, a professor of government at University of Wisconsin-Madison, tweeted out a side-by-side comparison. 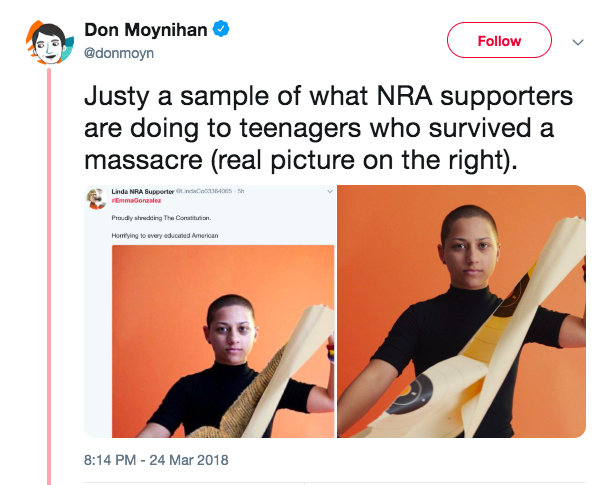 Greenfield got his U.S. figure from Everytown, an advocacy group co-founded by former New York Mayor Michael Bloomberg that seeks to prevent gun violence. Everytown counts any time a firearm discharges inside a school building, or on a school campus or grounds. Its database includes incidents when no one was injured, attempted or completed suicides, and accidents.

As for the other part of Greenfield’s claim -- that there have been only 18 school shootings in the rest of the world over the past 20 years -- Greenfield told us he couldn’t recall the source of that information, adding, "Yes, I cop to insufficient research."

No. 4: Sarah Huckabee Sanders said, "Tear gas was used on average once a month during the Obama administration for very similar circumstances."

According to the Department of Homeland Security, from 2012 to 2016, border officers used tear gas 79 times. On average, that’s about 1.3 incidents per month. Without a monthly breakdown, we can’t know if tear gas was actually used about once a month, and DHS provided no information that allows a comparison of the circumstances of use.

But Sanders gave an average figure and on those grounds, we rated this claim Mostly True.

No. 3: David Hogg wasn’t at school during the Parkland school shooting.

"In a recently leaked excerpt of a CBS documentary, David Hogg admits he was at home during the Parkland shooting," reads the opening of a story on Squawker.org. There was no leak. In the documentary, Hogg said, "On the day of the shooting, I got my camera and got on my bike and rode as fast as I could three miles from my house to the school to get as much video and to get as many interviews as I could because I knew that this could not be another mass shooting."

That happened around 6 p.m. on the day of the shooting. Hogg was in class at about 2:30 when the gunfire began. He shot a video on his cellphone while taking cover in a classroom closet.

No. 2: Beto O’Rourke "has a criminal record that includes DWI and burglary arrests."

This is accurate. Democratic U.S. Senate candidate Beto O’Rourke of Texas said during the 2018 midterm race that in younger days he was arrested twice in his hometown of El Paso: once for leaping a campus fence and the other time for driving while intoxicated.

The 2018 contest brought a 2012 television ad back into the picture. The ad from a Democratic congressional opponent of O’Rourke said he had "a criminal record that includes DWI and burglary arrests."

In August 2017, O’Rourke described the arrests to an East Texas newspaper. The Palestine Herald-Press quoted him saying: "Some 20 years ago, I was charged with driving under the influence and, during my college years, I jumped a fence at the University of Texas at El Paso which resulted in a burglary charge," O'Rourke said. "I was not convicted of either."

O’Rourke said he had to own his bad decisions. We rated the claim True.

No. 1: The Trump administration’s policy of separating families is the same way Barack Obama did it.

This claim rated False. As the Trump administration enforced a "zero-tolerance" policy and began separating children from their parents at the southwest border, some Republican commentators argued the policy wasn’t new.

Immigration experts we spoke to said Obama-era policies did lead to some family separations, but only relatively rarely, and nowhere near the rate of the Trump administration. In about six weeks, Trump’s approach led to over 2,000 separations.

In contrast to this, Obama’s immigration policy specifically sought to avoid breaking up families.